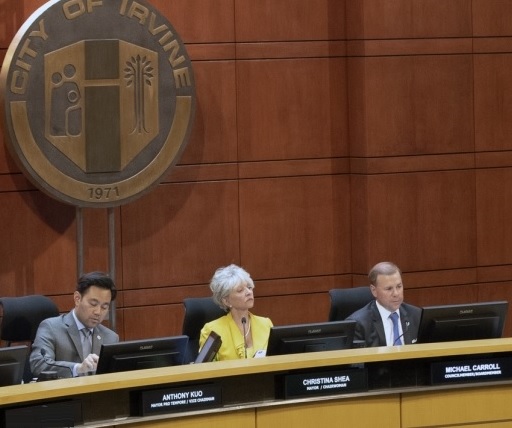 While tens of thousands of Irvine residents were under evacuation orders due to the Silverado Canyon Wildfire, appointed Mayor Christina Shea and appointed Councilman Mike Carroll engineered a Council vote to begin leasing out the ARDA site at the Great Park — even though the site is zoned exclusively for our long-promised Veterans Memorial Park & Cemetery.

Shea and Carroll have been scheming for years to delay and derail the voter-approved Veterans Memorial Park & Cemetery on the ARDA site.

On Tuesday (October 27th), in a meeting closed to the public, the Council voted 3-2 in favor of a Shea-Carroll motion to enter into multi-year leases for big companies engaged in commercial tree trimming, tree hauling, and onsite mulching and composting operations that will bring many large trucks in and out of the area.  That means that not only will portions of the ARDA site be unavailable for the Veterans Cemetery, but Great Park neighborhoods will be subjected to noisy truck traffic and foul odors for years.

More than 70 comments from Irvine residents were submitted to the City via email prior to the Council vote.  All but one were in opposition to the leases.

Ignoring the public comments — and the 19,790 Irvine residents who signed an initiative petition this past year in support of the Veterans Memorial Park & Cemetery at the ARDA site — Councilman Anthony Kuo joined Shea and Carroll in support of the leases.  Councilmembers Farrah Khan and Melissa Fox were opposed.

During the meeting, Mayor Shea claimed that the land at the ARDA site is currently available for commercial leasing because construction of the Veterans Memorial Park & Cemetery cannot begin yet.  However, former Mayor Larry Agran stated, “Shea isn’t being honest with Irvine’s residents, and she knows it.  Under my ‘Build it NOW!’ plan, which is in the form of an official Resolution, the City could begin the work of demolition, cleanup, and building the beautiful 2-mile perimeter park and memorial gardens at the ARDA site within just 20 days after Council approval.”  Agran added, “If I am elected to the Council on November 3rd, I will call for a vote on my Resolution at the first business meeting of the new City Council on January 12, 2021.”  To read Agran’s Resolution, click here.

Ed Pope, Chair of the Build the Great Park Veterans Cemetery committee, issued this statement: “Shea and Carroll have taken more than $629,000 in ‘dark money’ from giant developers and corporate special interest groups in support of their current political campaigns — and in funded attacks against their political rivals, including Larry Agran.  Now we know what $629,000 buys.  It buys Shea’s and Carroll’s loyalty to business interests, even if that means thwarting the will of the people and further hurting veterans and veterans’ families.”