At one time or another, most of us have declared that “Irvine schools are excellent” — and, yes, they are, all of them are.  But, most Irvine residents don’t know that Irvine’s excellent K-12 public schools are actually located in two separate School Districts.  About 33,000 of Irvine’s total K-12 students (89 percent) attend Irvine schools that are administered by the Irvine Unified School District (IUSD).  But more than 4,000 Irvine students (11 percent) attend K-12 schools that are located in the City of Irvine, but are actually part of the Tustin Unified School District (TUSD).

The Irvine students attending TUSD schools are mostly from villages and neighborhoods in the northern part of Irvine — Northpark, Northpark Square, Orchard Hills, and West Irvine.  But these Irvine students — and their parents — have never had someone they could comfortably call their own School Board representative. 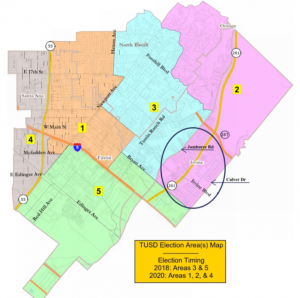 That’s about to change.  Recently, TUSD joined the rapidly growing number of school districts in California that are reforming the way school board members are elected.  Beginning in 2018 and in 2020, instead of all five members of the Tustin Unified School District being elected “at large” — by all the voters in the far-flung TUSD — the District  will be divided into five geographic voting areas, and each one will elect its own School Board member.

This is being done to conform to the requirements of the California Voting Rights Act, which was enacted in 2001 to bring about local representation that is fairer, with more diversity among elected officials who come from smaller voting areas.  These locally elected individuals — representing smaller areas where they live — are likely to be more knowledgeable about their own area’s schools and school problems.  Each elected School Board member will, of course, vote on behalf of every resident and every child in the TUSD, but for Irvine residents who live in the TUSD, this will be the first time they will be able to focus on electing their “own” School Board member.