Congratulations to School Board member Sharon Wallin, who was re-elected to her fifth four-year term — this time as Trustee for Area 2 of the Irvine Unified School District.

As many readers of this column already know, I helped Jean Anne Turner with her content-filled, positive campaign that was, in large part, an Irvine “listening tour.”  We listened to Irvine citizens, who spoke to us in voices big and small.  What did they say?  They recognize and appreciate what is good about Irvine schools, but they certainly don’t think the Irvine Unified School District is perfect.  Far from it.  IUSD, they say, has some serious problems that require immediate attention. Topmost among these is school safety.  And they identify two specific issues that are especially troubling: the threat of gun violence in our schools, and the traffic mess at so many school sites. 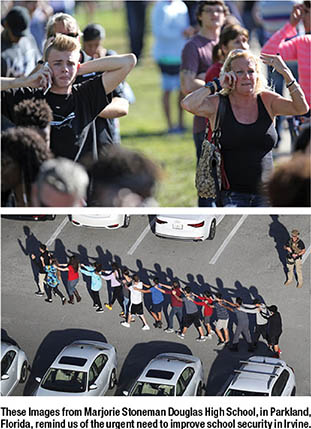 For now, let’s talk about gun violence and the need for better school security.  Seared into our memories are the horrific scenes of mass shootings in American schools — school shootings that have become so frequent that only the most recent incidents or those with the highest body counts make the list of shootings that we remember by name … Columbine, Sandy Hook, Parkland.

Some months ago, I watched a televised IUSD briefing on school security, describing available security measures that include installation of reinforced doors and lockdown hardware, video surveillance, and other protective measures.  As I’ve thought about the presentation, it has become pretty clear to me that our School District and our City are not doing enough, and they certainly aren’t moving quickly enough.

The need for an action plan

My own concerns were confirmed when I interviewed former Irvine Mayor Larry Agran, who was responsible for dramatically boosting City funding for all Irvine schools, especially to improve school health and school safety.  When I asked Larry Agran what he thought was needed to protect students and teachers, the former Mayor said, “It’s going to require extensive physical improvements at our schools … various kinds of barriers and checkpoints, remodeling and reconstructing older schools with high-security doors and lockdown systems, comprehensive video surveillance systems, and more specially trained police officers — School Resource Officers — assigned to Irvine schools.”

Agran acknowledged that “this will cost millions of dollars, probably $10 million for starters.”  Then, he added, “It’s sad to say, but this is the price we must pay locally when our national political leaders put gun rights above the rights of teachers and students to work and study and learn in schools that are safe — protected from the threat of gun violence.”

The former Mayor agreed with my concern that the School Board and the City don’t seem to be moving ahead with a sense of real urgency.  Maybe it’s a case of thinking “it won’t happen here.”  Or maybe it’s the daunting price tag that comes with school security.  Agran said:  “If money is the issue, then the City Council and the School Board members need to say so — and then have the political courage to call for a $50 or $100 per year voter-approved tax to ensure that essential school security improvements are put in place in the next two or three years.”

Agran noted that school safety is a joint responsibility of the City and the School District, adding, “The issue of school security needs to be given greater visibility and greater attention right away.  I suggest the City Council and School Board convene a series of well-publicized joint meetings, then adopt a joint plan of action plan that includes keeping the public advised and involved every step of the way.”