“Save the Great Park Veterans Cemetery!”

“Save the Great Park Veterans Cemetery!”

Volunteer Petition circulators Harvey Liss (left) and Michael Lopez (right) are among dozens of volunteers who are gathering the required 12,000 Irvine voter signatures by Nov. 8th to empower Irvine citizens to decide the Veterans Cemetery issue at the next City election.

On Friday, October 13th, a newly-formed, citizen-led committee to “Save the Veterans Cemetery” launched an audacious campaign to collect 12,000 Irvine voter signatures on a Referendum Petition.  The purpose of the Referendum Petition campaign is to overturn an Irvine City Council ordinance that rezoned the site of the Great Park Veterans Cemetery, replacing the Veterans Cemetery with huge office and commercial development.  The launch of the campaign is apparently a broad-based citizen reaction to the very unpopular City Council land-use decision.

At a hastily called June 6th City Council meeting, and again at an October 10th Council meeting, Irvine City Councilwoman Melissa Fox shocked her former supporters by voting to abandon the City’s 4-year-old project to build a State-approved, 125-acre Veterans Cemetery in the Great Park.  Fox joined Mayor Donald Wagner and Councilwoman Christina Shea to, instead, vote for a complicated “land-swap” and zone change that will enable developer FivePoint Communities to take ownership of what has been the Great Park Veterans Cemetery site and build massive office complexes and commercial projects on the property.

The City Council votes on the FivePoint deal have been 3-to-2, with Councilmembers Jeff Lalloway and Lynn Schott voting NO.  Schott has described the transfer of ownership and accompanying zone change ordinance as a “giveaway of our Great Park” to FivePoint. In fact, the loss of the 125-acre Veterans Cemetery in the Great Park would shrink the Park’s size by 10 percent.

Councilman Lalloway decried the Council action as a thinly veiled land-grab by FivePoint to secure valuable “entitlement” to intensively develop the 125-acre site, producing a windfall profit of $500 million or more for the developer.  Lalloway noted the windfall profit was going to be at the expense of the entire Irvine community.  The FivePoint plans call for 812,000 square feet of office and commercial development, generating nearly 10,000 cars and trucks on Irvine streets every day, producing yet worse traffic jams and air pollution throughout the City.

A Lawsuit and a Referendum

Testifying against the zone change ordinance that would authorize the FivePoint office and commercial development of what has been the Great Park Veterans Cemetery site, former Mayor Larry Agran, a public interest environmental defense lawyer, has said: “The development on the scale contemplated by FivePoint Communities requires an entirely new, comprehensive Environmental Impact Report (EIR) that includes not only a thorough analysis of traffic, but also an examination of local air pollution and toxic contamination from long-ago military operations.”  Agran warned that the Council’s disregard of proper procedures and the requirements of the California Environmental Quality Act (CEQA) were sure to invite a lawsuit against the City. 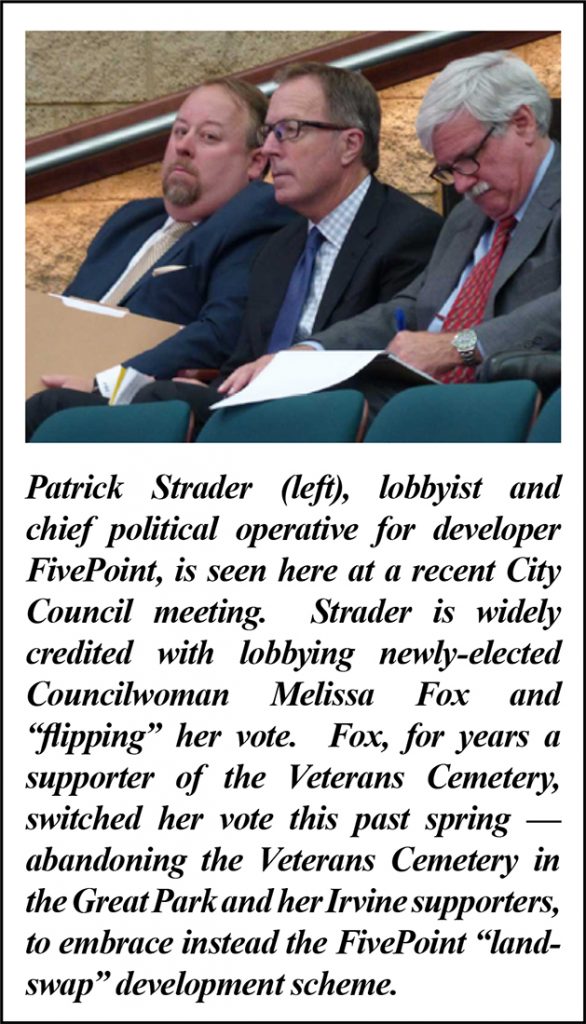 A lawsuit is still expected.  What came as an unexpected surprise, however, was the Referendum Petition begun by longtime Irvine resident and retired high school teacher, Ed Pope.  Chair of the recently organized Save the Veterans Cemetery committee, Pope is engaging hundreds of volunteers and donors to join the grassroots campaign and help gather signatures at shopping centers and in neighborhoods across the City.

In an official announcement of the Referendum campaign, Pope said, “This past June 6th — just 10 days before the State of California was scheduled to send $30 million to our City to start construction of the 125-acre Veterans Cemetery in the tranquil and beautiful Great Park — the Irvine City Council suddenly voted to abandon the project.”  He added, “This dishonors our veterans.”

Pope, himself a U.S. Army veteran, described the challenge ahead: “We only have until November 8th to gather the 12,000 signatures necessary on our Referendum Petition to stop this travesty and restore Irvine’s promise to Orange County veterans — by empowering the citizens of Irvine to vote on the Veterans Cemetery project at the next City election.  I have great faith in my fellow Irvine residents and am confident that our Referendum Petition campaign will be successful.”