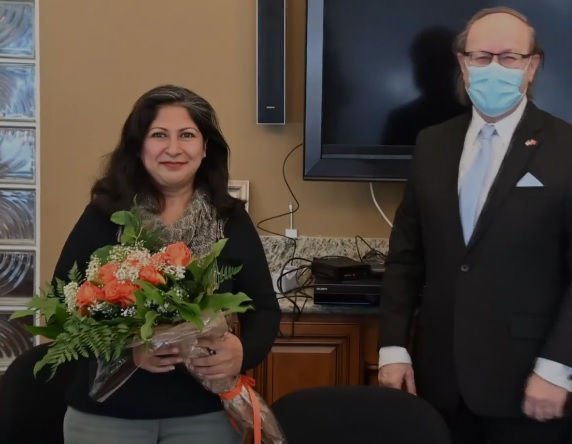 As publisher of Irvine Community News & Views, from time to time I feel the need to weigh-in personally on important community matters.

Over the past week, the Voice of OC and Irvine Watchdog have reported on a disturbing 2020 video that has surfaced showing Mayor Farrah Khan attending an event with members of the Turkish community. In the video, Mayor Khan is seen joking with Ergun Kirlikovali — a notorious Armenian Genocide denier — about making Armenians “disappear.”

The Armenian Genocide began in 1915 during World War I in the Ottoman Empire, when the Turkish government killed 1.5 million Armenian people, and forcibly removed tens of thousands of Armenian children from their families and converted them to Islam.

Not only did Khan joke with Kirlikovali about making Armenians disappear, the video shows her telling the group that she stands with the Turkish community “no matter what.” Khan then appointed Kirlikovali to her newly-formed Mayor’s Advisory Council. Since becoming Mayor of Irvine in 2020, Khan has been seen at a number of events with Kirlikovali by her side. She posted a Tweet after a holiday event with Kirlikovali thanking him for making her feel like “family.”

Khan initially released a defiant statement saying the video had been “doctored” by campaign rivals. However, that became problematic for the Mayor when multiple sources confirmed the authenticity of the video.

Moreover, in recent days Kirlikovali has taken to Twitter to double-down on his denial of the Genocide and to hurl a new series of hateful comments aimed at the Armenian people, including the following post, which has been removed by Twitter because of its incendiary content:

After Kirlikovali’s latest round of tweets became public, Khan was forced to admit the video was not doctored and she issued a public apology.

Another source of political turmoil for Khan is that just two weeks ago, she failed to secure the early endorsement of the local Democratic club in Irvine (Democrats of Greater Irvine). Khan is currently running for a second two-year term as Mayor.

At the endorsement meeting, Irvine Democratic club members expressed their anger with Khan regarding a number of issues: her lack of support for district elections; her undemocratic “Rule of Two”; and her continued efforts to shut off public participation at City Council meetings. Members also voiced their disgust at Khan’s continued refusal to implement the Irvine voter-approved, State-funded Veterans Memorial Park & Cemetery at the Great Park.

In this election year, the Mayor’s political problems should be matters of concern for our entire community. It’s time for all of us to speak up. As publisher, I certainly intend to do so.