With new State funding, the Southern California Veterans Memorial Park and Cemetery at the Great Park could soon be built and operational.

Initially approved by the Irvine City Council and State Legislature in 2014, the planned Veterans Cemetery in the Great Park is now on the federally-approved “Priority List” for funding and construction.  With State and local funding, the officially designated Southern California Veterans Memorial Park and Cemetery — on a 125-acre site within the Great Park — could be built and operational by Veterans Day, 2019.

In a bold move to quickly gain the final State and Federal go-ahead for construction of the Veterans Memorial Park and Cemetery on 125 acres within the Great Park, Councilmember Jeff Lalloway put on the agenda a proposal that the City Council authorize the expenditure of up to $40 million in available Great Park development funds — enough to fund half of the estimated costs to construct Phase One of the project.  Lalloway’s motion set a goal of having the Veterans Cemetery operational by Veterans Day, 2019, just 30 months from now.

Under the Lalloway plan, the other half of the funding — up to $40 million — would be expected to come from the State of California.  In a letter to the Irvine City Council, Orange County Assemblywoman Sharon Quirk-Silva, who gained initial State approval of the project in 2014, has pledged to work with her colleagues in the Legislature and with Governor Jerry Brown to secure the necessary State funds.

Then, in a bizarre twist, moments after the historic motion was approved, Councilmember Melissa Fox, who had spoken in favor of Lalloway’s motion and had just voted YES, asked for “reconsideration” of the vote.

Whether it was spontaneous — or the result of pressure from Mayor Wagner, or from Councilmember Christina Shea and lobbyists for developer FivePoint Communities — Fox said out loud that she was “confused,” and then asked for help in cobbling together her own motion, which was pretty much a restatement of Lalloway’s motion.  However, Fox added a provision directing City staff to explore a “second track” for the Veterans Cemetery.  Specifically, she asked that City staff be directed to meet with representatives from development company FivePoint Communities to discuss their controversial “land-swap” proposal, which Councilmember Shea has been pushing for more than a year.

The “land-swap,” which some have derided as a “land swindle,” involves moving the Veterans Cemetery to an entirely different and smaller site near the Irvine Train Station, while giving the 125-acre site in the Great Park to FivePoint for future private development and private profit.

Councilmember Lalloway repeatedly attacked the “land-swap” proposal as a thinly veiled entitlement scheme, which would result in FivePoint getting development rights to build 1,500 or even 2,000 new residential units on the 125-acre property, effectively reducing the size of the 1,300-acre Great Park by about 10 percent.  And, of course, the Great Park would be without the Veterans Memorial Park and Cemetery, the Great Park’s “most important feature,” according to Lalloway.

Experts have estimated the “land-swap” entitlement, and subsequent land sales to residential builders, could be worth many hundreds of millions of dollars to developer FivePoint Communities.

Lalloway referred to Fox’s inclusion of the alternative “land-swap” provision in her motion as a “poison pill” that would send a mixed-message to the Legislature and Governor, and could jeopardize Irvine’s chances of getting State funds for the City’s originally designated 125-acre Great Park site.

Finally, Fox’s motion passed, 3-to-2, with Councilmembers Lalloway and Schott voting NO.

Meanwhile, in a further effort to derail the Veterans Cemetery, Councilmember Christina Shea sent a letter to the Governor, attacking the 125-acre Great Park Veterans Cemetery site, and pressing Brown to consider the “land-swap” deal being pushed by developer FivePoint Communities.

According to reports emanating from Sacramento, FivePoint president and CEO Emile Haddad, as well as other FivePoint officials and their team of lobbyists, have been walking the halls of the State Capitol, meeting with officials in the Governor’s office and key leaders in the Legislature — all in an effort to kill the Veterans Cemetery in the Great Park by killing State funding for the project. 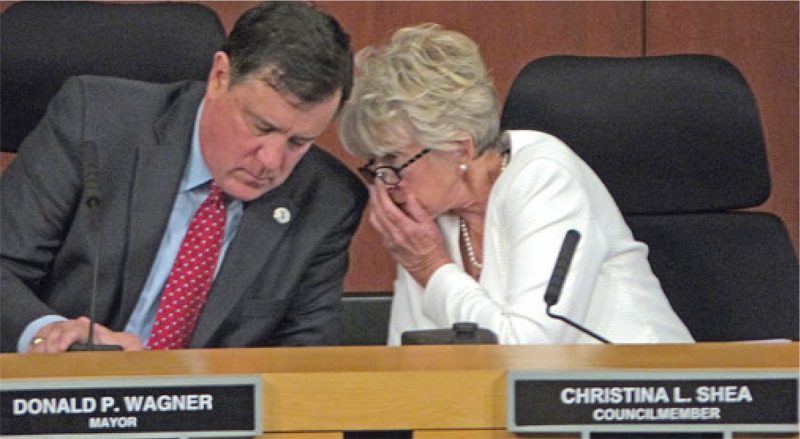 Mayor Wagner and Councilmember Shea teamed up to push the FivePoint “land-swap.”

Take our newest Irvine Community Poll and show your opinion on the Veterans Cemetery at the Great Park: Take the Poll Now!