Over 20,000 March in OC on Trump Inauguration Anniversary

On Saturday, over 20,000 people marched in Santa Ana for the OC Women’s March.  It marked the one-year anniversary of President Donald Trump’s inauguration, and one-year anniversary from last year’s record-breaking Women’s March that saw hundreds of thousands of people marching for women’s rights all across the country.  This year, marches again took place across the country advocating for women’s rights and standing in solidarity with one another in the face of what is a very complicated political environment. 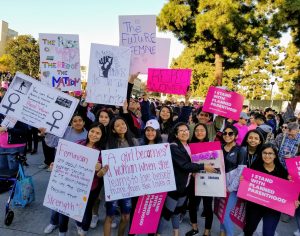 Political groups throughout Orange County, including a few from Irvine, were in attendance, advocating for social justice, human rights, climate change, immigration, and LGBTQ rights, just to name a few.  Another big theme of this year’s Women’s March was the #MeToo movement, as signs showing support for victims of sexual harassment were seen throughout the crowd. (Some sign quotes from the March: “Donald Trump, you’re so vain you probably think this March is about you,” “Behind every successful woman is herself,” and “Grab em by the midterms.”)

The 2018 midterm elections are a big reason for hope among those who are unhappy with the current Presidential leadership.  Ground zero for some of the most competitive Congressional seats is right here in Orange County, including the 45th Congressional District that represents all of Irvine and is currently held by Republican Mimi Walters.  The 45th Congressional seat has just over 400,000 voters, with Republicans at 38.8%, Democrats at 30.4%, and No Party Preference (NPP) at 26.5%.  The seat has a competitive primary this June where multiple candidates will be hoping to get enough votes to finish in the top two and advance to the general election in November. 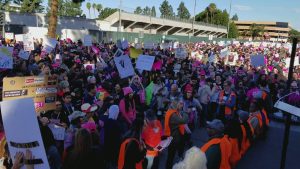 For more information on the OC Women’s March, go to http://www.ocwomensmarch.org