Hundreds of Irvine residents participated in ICNV’s Irvine Community Poll for May.  They voiced strong resident support for the City’s approved plan — also approved by the State and Federal government — to put the State Veterans Memorial Park and Cemetery on a 125-acre parcel in the Great Park.  By a 3-to-1 majority, residents not only expressed continuing citywide support for the Great Park Cemetery site; they rejected the “land-swap” being pushed by developer FivePoint Communities.

The land-swap would kill the Veterans Cemetery in the Great Park, move it miles away to land near the Irvine Train Station and the El Toro “Y,” and turn over the 125-acre Great Park site to FivePoint for commercial development and possibly residential development as well.  By killing the Veterans Cemetery in the Great Park and replacing it with development, nearly 10,000 average daily auto trips would be added to Irvine Boulevard and other already-overcrowded streets in northern Irvine.

The more that Irvine residents learn about the developer-promoted land-swap, the more unpopular it is. In fact, only about 1 in 8 poll respondents actually favors the Veterans Cemetery land-swap. (Another 1 in 8 are just against any cemetery in town…period!) The Comments, Notes and Letters we’ve received make clear just how strongly Irvine residents feel about this entire matter.  Tare a look at the representative sample of opinions and observations offered by your Irvine friends and neighbors.   — FJL

Do you favor or oppose keeping the Veterans Memorial Park and Cemetery on the 125-acre site in the Great Park, as planned? 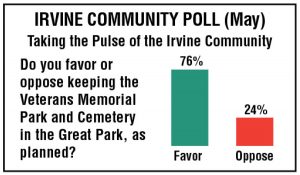 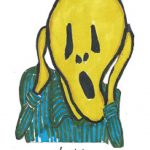 At the May 23rd City Council meeting, Angelo Vassos, an Air Force veteran and 51-year resident of Irvine, testified as follows:

I don’t understand why the City Council would consider dropping a site for the Veterans Cemetery that has already been approved at all levels of government — our City, the State, and the Federal government.  By legislation, a site within the Great Park has been designated which would be maintained by the State of California in perpetuity, with no cost to the residents of Irvine.

On the other hand, if we factor in politics and money (lots of money) spent by developers to elect two Council members [Christina Shea and Mayor Don Wagner], it becomes clear what’s going on.  The greed of the developers who would interrupt and change the Veterans Cemetery project so they can make still more money has become the deciding factor in this City.  It shouldn’t be that way. No fellow veteran that I have spoken with who lives in Irvine agrees with this developer land-swap boondoggle.

Letters to the editor are welcome.  Please include your name and ZIP code.  Letters for publication must be addressed to Editor, 4199 Campus Drive, Suite 550, Irvine, CA 92612 or email Editor@IrvineCommunityNews.org. Letters may be edited for publication. Unpublished letters will not be acknowledged or returned.