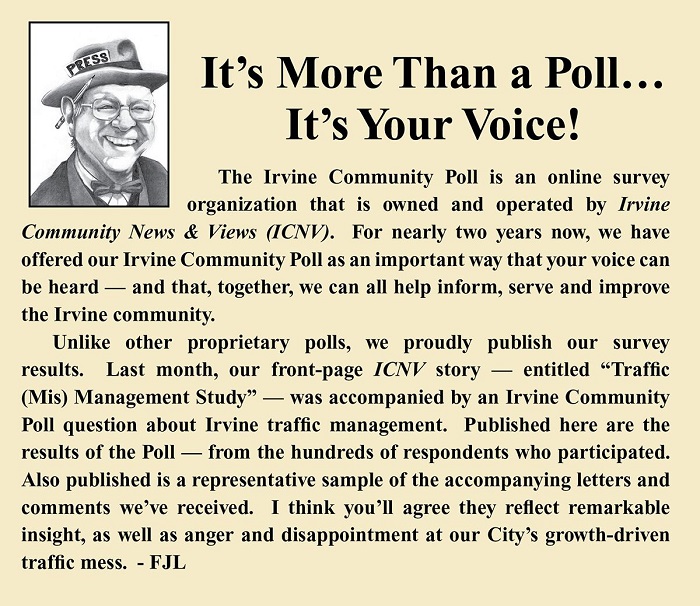 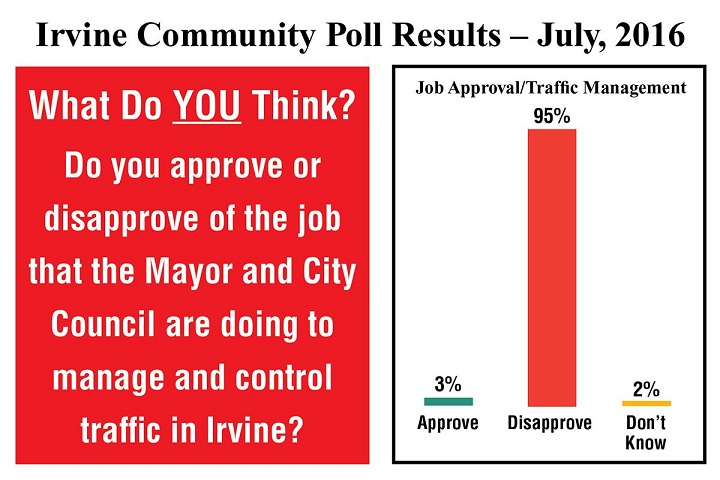 I still believe that Irvine’s traffic is fine.  Our streets were built nice and large thanks to prior City Councilmembers, and now they are just the right size.  It is unreasonable to say that anywhere in the L.A. area is going to have good traffic flow.
—Anthony Fitzgerald

What happened to our planned community?  Driving in Irvine is a nightmare.  Congestion, long traffic lights, too many cars, and too many houses and apartments, and yet more building.  It is all out of control.  I blame the Mayor and Council for letting this happen to our once beautiful, quiet and welcoming Irvine.
—Gary Parker

We are growing too fast and have too many apartments being built, putting too many cars on our streets.
—Michael LaRocco

Traffic on Culver is shocking! Just too many cars!
—Bev Menkin

Traffic is awful.  Massive construction of multi-family housing projects will make traffic even worse.  No one will want to live or work here.
—Linda Lewis

As a resident of Irvine for over 20 years, I have seen the City change from a small town with traffic jams that were an infrequent annoyance to a City of untamed growth with frequent traffic jams as a way of life.  Timing traffic lights might give some minor relief, but the real issue is unbridled growth in areas that were open spaces just a few short years ago.  The City needs to create traffic plans before entire areas are awash with new housing developments, not after.  The control of traffic should be a large part of the plan.  Based on my observations, there is little or no thought given to traffic control in the City of Irvine…and that has to change.
—Darrell Wilson

We’ve lived in the Woodbury area since 2008.  It was so wonderful to live in a quiet neighborhood with minimum traffic.  But now we constantly hear cars racing past our house.  We need to constantly watch for drivers who are going through red lights.  Though we approved of some growth in our neighborhood, it’s just become way too populated.
—Maria Williams

Stop using every available piece of land for high-density housing.  I’d like to support the businesses in Irvine, but it’s getting more and more frustrating to shop here due to the difficulty of finding parking in many of the centers.
—Monica Bono

I love Irvine, but greed has destroyed the vision.  For example, the Great Park…We don’t need that many homes!  We voted on a Great Park with great community spaces.  Then, greed kicked in and way too many homes are being built, with thousands to go, and Irvine is ruined.
—Rudy Rodriguez

A more irresponsible gang running a city is hard to find.
—Richard McDonough

We’re witnessing a complete sell-out to developers — thousands more apartments and an office building in the next year on Jamboree near the airport.  Get ready for L.A.-style gridlock!
—Rob Rowan

So many apartment homes are springing up everywhere I turn lately.  I’m for growth, but in moderation.  The Irvine Company charges plenty for rent and there has to be an abundance of money for them.  I think it’s about time to slow down the growth, before we become like our neighbor, Los Angeles.
—Ray Lopez

Try driving down Culver, Jamboree, Alton, Barranca, or Harvard during the morning or evening rush hour commute, and watch 100 cars get stopped for one lonely pedestrian happily crossing the street — one push of the button throws all sense of synchronization out the window.  Isn’t anyone paying attention?  Don’t be surprised to see people banging their heads on the steering wheel…and a staggering growth in road rage.
—Jeff Cohen

The traffic in Irvine is horrendous.  More building = more people = more traffic.  The traffic congestion will get worse.  The building MUST stop in all areas.  The City of Irvine in our dreams is lost forever.
—Caesar Coleman

Too many overpriced Irvine Co. apartments are being built and are causing all the traffic.
—Reggy Singh

The continued housing growth has added thousands of cars to the Irvine streets, making commute times 2 to 3 times longer than they used to be.  It is pretty clear that, as usual, our City leaders acted before seeing the big picture.  How will thousands of new residents and their cars impact the infrastructure of our City and the peace and harmony that so many of us enjoyed for so many years?
—Cheryl Higley

Traffic in the City is terrible.  We need better public transportation — buses should run during the week and weekends.  Also, we need more bike lanes and bus lanes.
—Cooper Quillian

Irvine is the only city that I know of where traffic does NOT flow.  The lights are regulated so that you sit, sit, and sit some more.  It takes forever to go just a couple of miles — it’s ridiculous.  Why do surrounding cities manage to keep their traffic flowing but Irvine cannot?
—Jane Donovan

Irvine is so far gone.  There is no surprise here — the vibe, the atmosphere, the energy is all bad, everyone is uptight, in a hurry and stuck in traffic.  It’s overbuilt — that’s the bottom line.    It’s so sad.  Irvine used to be the coolest City around, plus the safest.  Irvine is ruined and there is no way to come back from the damage.  It is a constant topic in our group.  Most of us have lived here our whole lives, and we are just waiting for the day our kids graduate from high school to move.  It’s a shame, but the direction Irvine is going is not the direction we were led to believe it was going.
—Kelli Peters

Our City should be embarrassed!  Some “planned community!”
—Victoria Rossiter

Traffic is our biggest problem in the IBC, and that is not considering all the new construction in the area!  From 4:30 to 6:00 p.m. there is gridlock on Jamboree, Von Karmen, Michelson and Campus.  Lights need to be better synchronized — we need new solutions!
—Jim Phelps

The current majority on the City Council is destroying our City.  They are doing it by over-building and approving high-density apartments that are five to six stories tall and blocks long.  All this high-density building creates traffic.  In the 1970s, when Woodbridge and Deerfield were developed, they built apartments that were only two stories tall.  I guess they were smarter then.
—John Battey

We do not need more homes which, in turn, increase the traffic in our City.  If I am not mistaken, the City Council proposed to take out the green-belt on Jeffrey Road (along Woodbridge) to add lanes.  I am totally against that.  We need to stop adding so many more homes.  It needs to be strictly limited.  Our City needs new leadership.
—Tom Lillig

We’re selling our home and moving to Mission Viejo.  This excessive traffic is not what we signed up for when choosing Irvine as our home.
—Jessica Lopez

The current Mayor and City Council are selling out this once great City to big Business. Pay attention, Irvinians!
—Ron Sai

Poor oversight of residential development has resulted in increased traffic and decreased quality of life in Irvine.  There is an unbelievable lack of leadership resulting in overdevelopment by real estate companies and a green light to just build out every piece of open green area.
—Richard Sarlitt

Too much residential construction has ruined Irvine’s brand as the best city to live in.  The quiet Irvine is gone.  The City’s politicians did nothing to keep Irvine planned properly.
—Gary Jian

As long as the City of Irvine continues to approve more housing, our City will continue to suffer with traffic.  I don’t understand how they think you can add more housing, and expect our current streets to handle the increase.  My daughter’s high school is two blocks away.  With only three lights from our home to school, it takes 10 minutes by car.  Walking would take twice as long because she has to wait for those same lights in order to cross.  The Mayor and City Council seriously need to re-evaluate their decisions and the consequences the community of Irvine is having to endure.
—Elsie Gomez

I have lived here for over 40 years.  The traffic over the past five years has doubled.  It takes 15 minutes to get out of Westpark Village One, and onto Culver Drive and then the I-405.
—Ellen Jones

Traffic in Irvine is out of control!  What kind of planning is this to continue to give building permits to the big developers, then wonder why the traffic is out of control.  We don’t have enough water either, so why all the construction of traffic creating monstrosities?  The greed continues to ruin a once incredible City!
—Susan Penske

The Mayor and his colleagues on the City Council, through their aggressive growth policies, have contributed to congestion, pollution, and increased crime in our area.
—Ben Sampson

Irvine not only needs to improve its traffic situation; we need a transportation system — with buses that run all the time and go everywhere.
—Susan Krubi

I neither approve or disapprove of the job that the Mayor and City Council are doing to control traffic in Irvine.  Considering the glut of new residents, the traffic situation could have been worse.  But, it could also have been better.
—Gary Nguyen