As the founding publisher of Irvine Community News & Views, I’ve always believed that ICNV’s mission as an independent community newspaper includes doing what we can to promote civic engagement and citizen activism to improve our City.

In addition to giving sustained coverage to important stories, we make use of our online polling organization, the Irvine Community Poll, to not only “take the pulse of the Irvine community,” but to also invite comments and encourage community conversations.  Sometimes those conversations lead to a grassroots civic movement, as with the Save the Veterans Cemetery • NO on B campaign, which ICNV proudly supports.

The Irvine Community Poll results have been remarkably stable — with about 90 percent consistently opposed to the FivePoint “land-swap” scheme.  But the poll results that count — on June 5th, Election Day — are certain to be much closer, especially as FivePoint pours millions into a campaign to mislead, misinform, and even lie to boost the Yes on B vote.  Be ready, Irvine!  And VOTE!

Another conversation we’ve helped start with our Irvine Community Poll regards gun violence and school security…and what we can do to improve things here in Irvine.  Take a look at Carolyn Inmon’s SchoolWatch column this month (Page 8), as well as the representative citizen comments we’ve published on Page 11.  I think you’ll find reason to be encouraged.      –FJL 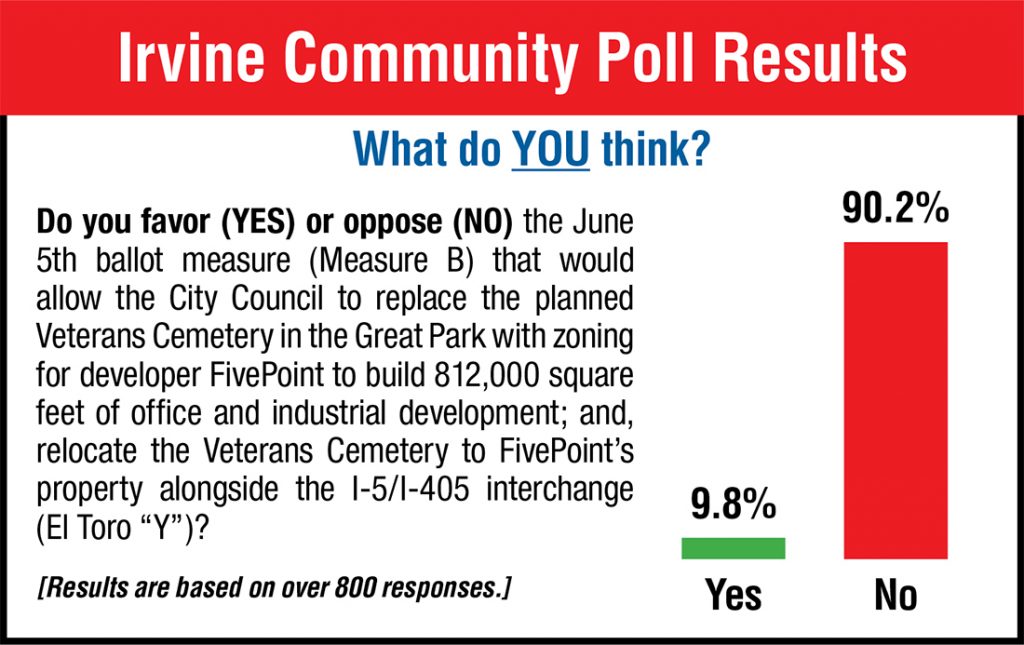 No on B Letters

[icon name=”square” class=”” unprefixed_class=””] Ugh! Stuck in traffic.  Recently, I was driving northbound on Jeffrey and needed to turn left onto Alton.  So, I pulled to a stop half-way back in the left-turn pocket and waited for the green left-turn arrow to appear.  After what seemed like an interminable wait, the green arrow appeared.  But then to my dismay, the signal almost immediately turned red again, forcing me and the car in front of me to wait through yet another traffic cycle in order to complete my turn.

As I waited and waited, frustrated with this all-too-common traffic experience, I began to wonder what had happened to the original Irvine Master Plan — you know, the Master Plan that permitted only the intensity of development that was consistent with maintaining good traffic flow, and didn’t cause dysfunctional intersections and extended wait-times through multiple red lights.

Then, I recalled that under developer pressure, the Planning Commission has been approving “exceptions” or “overrides” to the Master Plan, resulting in degraded traffic flow.  And now, after developer FivePoint Communities and their affiliates spent over a million dollars in the last City election (2016) to fund a campaign filled with lies, libel, and deception, the resulting City Council majority agreed last year to approve FivePoint’s massive business, manufacturing and industrial development in the Great Park.  This development (Measure B on our June 5th ballot) would create some 10,000 additional daily automobile trips on Irvine’s streets — especially on Irvine Boulevard, Sand Canyon, and Jeffrey — instead of the fewer than 500 trips to be added by the originally planned and approved Veterans Cemetery in the Great Park that FivePoint now wants to replace.

As the light finally turned green and I went on my way, I was inspired by this thought: “On June 5th, I’ll have a chance to vote against the Council majority’s plan to make Irvine’s traffic even worse — I’ll vote NO on B!”
— Ed Sharman

[icon name=”square” class=”” unprefixed_class=””]  The Veterans Memorial Park and Cemetery that was planned and approved (2014-2016) for a 125-acre site in our Great Park was abandoned last year by a 3-vote majority of the 5-member Irvine City Council.  At the last moment before final implementation of the Veterans Cemetery construction plan, the three Councilmembers approved a land-swap promoted by a huge developer, FivePoint Communities.  The Council approved FivePoint’s plan to swap the Great Park original site for an alternative site near the junction of the I-5 and I-405 Freeways, known as the El Toro “Y”.  Developer FivePoint would then build large office, industrial, and manufacturing projects — and, later, big apartment complexes — on the original site in the Great Park.

If you are concerned and troubled about the rampant overdevelopment and endless traffic congestion that we now live with every day in Irvine, it is essential that you vote NO on Measure B, and tell the City Council that you want our Veterans Cemetery to be built at the original Site in the Great Park, where it has been planned for years.  The errant and misguided 3-vote majority of our Irvine City Council — Mayor Don Wagner, Councilwoman Christina Shea, and Councilwoman Melissa Fox — need to be reminded that they represent and are beholden to us, the Citizens of Irvine, and NOT FivePoint Communities and other developers.
— Steve Berger

[icon name=”square” class=”” unprefixed_class=””]  As a former classroom teacher, I believe that teachers and other staff should NOT be armed!  Schools should establish measures to ensure school security without the added complications of gun-carrying teachers.
— Laura Barwick 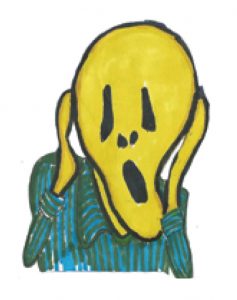 [icon name=”square” class=”” unprefixed_class=””]  The more guns, the more gun injuries and deaths.  Teachers have more than enough responsibility without the burden of life-and-death decisions involving students and other faculty.  Who has the task of making sure the weapons are secure?  There is no need to reinvent the wheel here; just ban any kind of automatic or semiautomatic weapons or any facsimile; then copy the regulations for gun ownership in Australia.
— Thomas G. Hallal

[icon name=”square” class=”” unprefixed_class=””]  We need to thoughtfully and responsibly respond to the recent mass shootings both in the schools and elsewhere.  The idea of arming teachers is alarming and irresponsible.  Mass shootings occur when military rifles and equipment are so easily available to the general public.  The Second Amendment never endorsed arming non-military citizens with weapons of mass destruction — weapons designed specifically and entirely for the purpose of killing mass numbers of people.  These are not weapons for legitimate protection or hunting.
— Cindy Eddleman

[icon name=”square” class=”” unprefixed_class=””]  There are devices that can be applied to doors to prevent entry, costing as little as $100 each — a much better idea than arming teachers!
— Catherine Gresh

[icon name=”square” class=”” unprefixed_class=””]  If you want to protect our precious students, let the teachers who want to be trained in firearm safety and use, carry firearms.  It is the only thing that will stop an armed, crazed person from killing innocent kids and teachers.
— Bobby Dunham

[icon name=”square” class=”” unprefixed_class=””]  Elementary school teachers need more support in getting help for students they feel may have issues — for example, mental health or possible abuse.  Elementary teachers have a good track record in identifying children at risk.  They need to be listened to.
— Susan Finn

[icon name=”square” class=”” unprefixed_class=””]  If we are to take one lesson from Parkland, Florida, we should encourage those teachers, coaches and administrators who want to carry a concealed weapon on campus to do so with proper training and background checks.  Irvine police are spectacular with keeping the community safe, but they cannot be there the moment something starts.  Even the threat of resistance may be enough to prevent some of these events from happening.
— Markus Klein

[icon name=”square” class=”” unprefixed_class=””]  It appears that Irvine is very similar to Columbine and Parkland — ours is a safe and affluent community with excellent schools in a park-like setting.  No one would expect a mass shooting here, but it could happen anywhere.  I support restricting ownership of assault rifles and increased background checks on a nationwide basis.  California has stricter gun laws than most states.  We need to enforce those laws, including removing guns from people who should not have them.  But we also have a problem in Irvine with school safety because we have open campuses.  I do not support arming teachers and administrators, but I do support increased funding for counseling and mental health services.  I don’t want our campuses to become like prisons or military camps, but what practical measures can we take to make our campuses more secure?
— Sharlene Baker 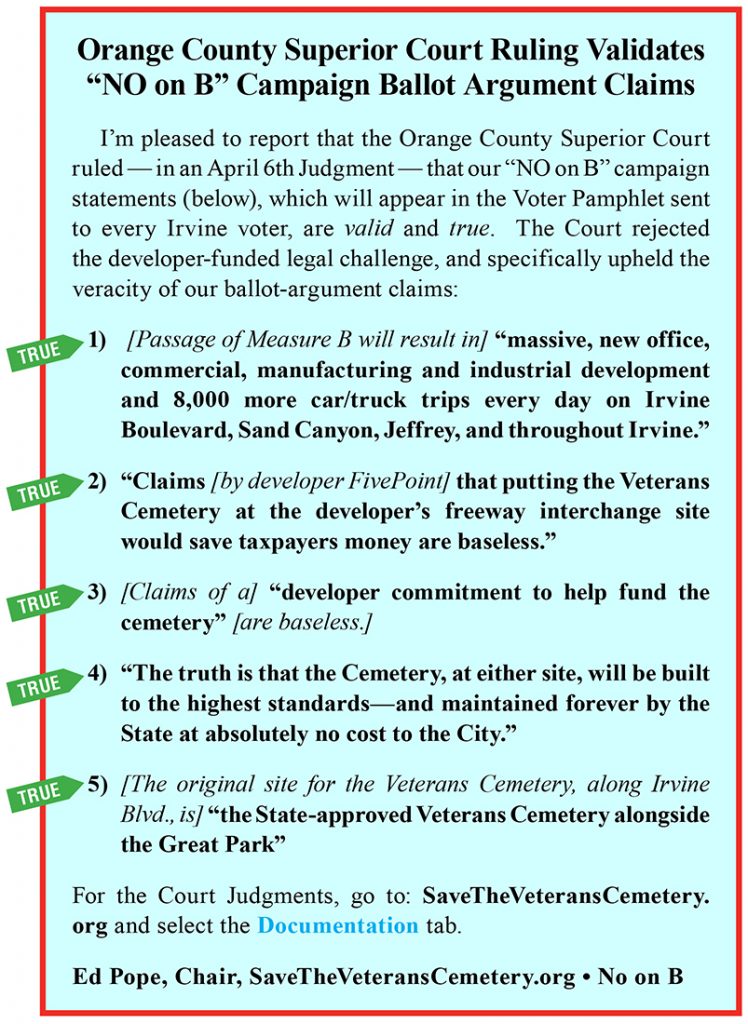