On March 12th, Irvine Mayor Donald Wagner (who had just been re-elected to a second term as Mayor last November), narrowly defeated Loretta Sanchez in a special election to fill a vacancy on the Orange County Board of Supervisors. Wagner’s March 12th election as Supervisor, in turn, created a vacancy in the office of Mayor…and a bit of a mess on the Irvine City Council.

Under the City’s Charter, Councilmember Christina Shea, who also held the title Mayor Pro Tem (that’s basically a fancy Latin term for “vice mayor”), automatically became Irvine’s unelected Mayor, succeeding Wagner. That meant Shea’s seat on the five-member Council became vacant. So, under the Irvine City Charter, that vacancy will be filled by another special election or by appointment, if three Councilmembers can agree on someone.

If the Council vacancy is filled by appointment, two of five City Councilmembers will hold their positions unelected by Irvine voters. That’s very bad, especially since three members of the current City Council — Shea (now Mayor), and Councilmembers Melissa Fox and Anthony Kuo — are already beholden to developer FivePoint Communities. And if these three get together to appoint a fourth Councilmember who is pro-developer and beholden to FivePoint, that will be a further departure from how our representative local democracy should work.

According to campaign finance records, mega-developer FivePoint and their business allies have, since 2016, spent millions of dollars — yes, millions! — to elect and otherwise support Wagner, Shea, Fox and Kuo. FivePoint funnels their money to Irvine campaigns through layers of shadowy, dark-money committees — so-called Political Action Committees (PACs) and Independent Expenditure (I.E.) committees. These PACs and I.E. committees pay for vicious attack mailers and expensive TV advertising — operating outside of the City’s campaign contribution laws which limit individual donations to just $490 per donor per candidate.

So, after FivePoint pours in hundreds of thousands of dollars per campaign to elect developer-friendly candidates in Irvine, those elected officials return the favor by rubber-stamping FivePoint projects time and time again without any critical review.

I won’t mince words here: This is legalized bribery, pure and simple. It is corruption of our local elections and our local democracy. And, yes, it has consequences. Just read the adjacent article and see what’s happening with growth and overdevelopment and traffic in Irvine.

Yes, folks, elections have real consequences — often to the detriment of our community — especially when BIG MONEY donors are buying the results they want.

A Failure of Leadership

Most residents — and business leaders too — will tell you that overdevelopment and traffic are Irvine’s biggest problems, causing a diminished quality of life from one end of the City to the other.

So, you’d think that when a developer shows up with plans to build an extra 1,000 housing units — on top of the 9,500 units previously permitted by the City — the City staff, the Planning Commission, and the City Council would be skeptical and ask some hard questions. Instead, throughout the month of March, the staff, Planning Commissioners and City Councilmembers showed themselves to be meek, weak, and totally ineffective in even voicing the public interest, let alone defending it.

Here is the story. In 2013, developer FivePoint won Council approval (3-2) to expand its entitlement to build a total of 9,500 residential units in their Great Park Neighborhoods. With about a third of those units built and sold, FivePoint lobbyists claimed that under State and local law they had the “right” to build another 1,056 residential units, fully 10 percent more than their initial entitlement.

Instead of pushback from Council-appointed Planning Commissioners, and the City Council itself, these City officials — with the power to say NO — showed they apparently fear developer FivePoint more than they care about existing Irvine residents. Here are the names of the officials who gave the go-ahead to FivePoint:

It’s pretty clear what developer FivePoint gets out of this — more entitlement that they didn’t have to pay for, which will translate into hundreds of millions of dollars in windfall profits. And what do existing Irvine residents get? More overdevelopment, more overcrowding, and much more traffic from more than 4,000 added daily rush-hour auto trips. Take a look at the 1-2-3-4 chart below, and think about it the next time you’re struggling to get across town (probably tomorrow!), stuck in traffic that simply exceeds the capacity of our infrastructure. 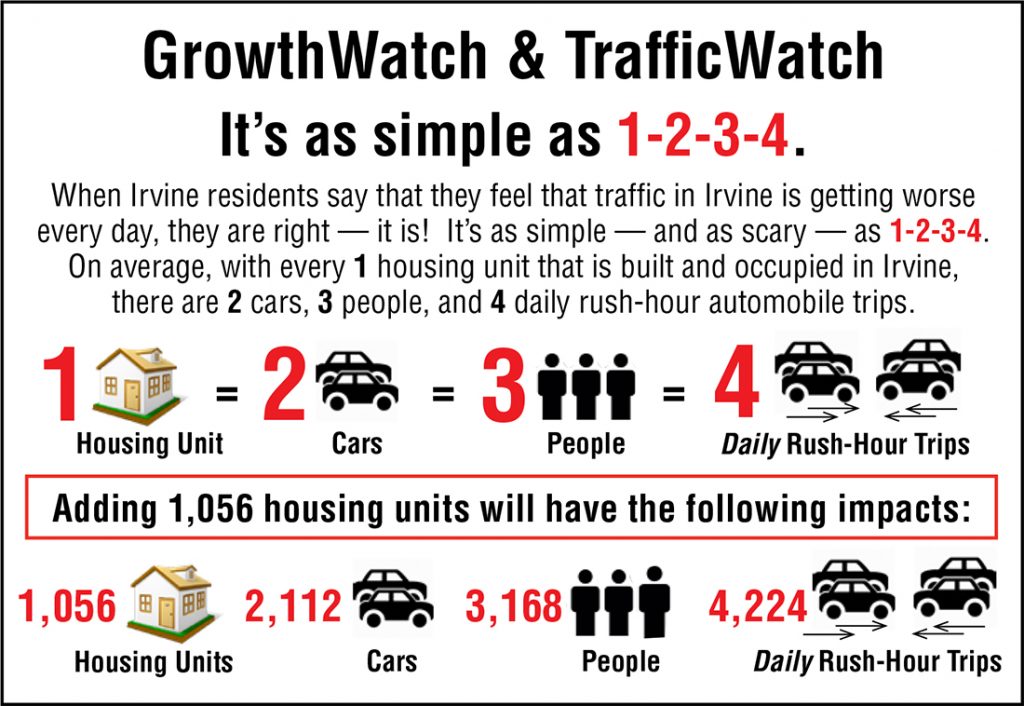