Beginning in early 2015, as ICNV’s publisher I personally sought to place copies of our community newspaper in the news racks located in the Irvine City Hall lobby, alongside other free newspapers allowed there, including the Irvine World News, OC Weekly, and other publications friendly to the politicians at City Hall. In an act of hostility, the City repeatedly refused to allow display of ICNV, asserting ICNV was a “political related publication.”

From the beginning, it was apparent that certain City Councilmembers and City management officials, motivated by animus, were discriminating against ICNV because of the paper’s frequent criticism of the Mayor and City Council, and what we believe to be their misguided policies.  Of course, criticism of government — at City Hall and elsewhere — is the time-honored role of a free press in a free society.

After fruitless negotiations lasting nearly a year, ICNV hired attorneys Fredric Woocher and Jenna Miara of Strumwasser & Woocher LLP, and sued the City in the Federal District Court in February 2016, alleging violation of the newspaper’s First Amendment rights to freedom of speech and freedom of the press, as well as the right to equal protection under the State and U.S. Constitutions. Since that filing, instead of acknowledging any wrongdoing and taking corrective action, the City spent hundreds of thousands of dollars in taxpayer funds fighting the lawsuit.  First, the City tried to have the case dismissed — a move that was denied in a stinging order and ruling by U.S. District Court Judge Andrew J. Guilford; next, the City demanded extensive and unnecessary discovery in an obvious attempt to overwhelm ICNV with legal fees. 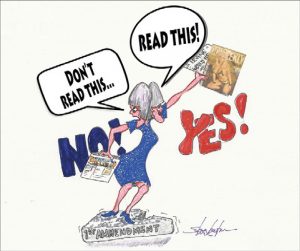 Beginning in 2015, Councilmember Christina Shea led a concerted effort — inside and outside City Hall — to damage Irvine Community News & Views and interfere with its distribution and advertisers.  Also involved was her political ally and recent appointee to the Irvine Transportation Commission, Steve Greenberg.

In June 2017, after adding yet another lawyer to the four already defending it, the City requested mediation.  The mediation resulted in the City of Irvine paying to ICNV a settlement in the amount of $350,000, and agreeing to a revision in the City’s policies, recognizing that ICNV and other newspapers must be treated equally at City Hall and in other City facilities — there can be no discrimination based on whether City officials like or dislike the “political” content of a newspaper.

During the pendency of the lawsuit, we discovered that there was a concerted effort to interfere with the publication and distribution of ICNV.  We reserve the right to pursue claims against individuals at City Hall or in the community when those individuals unlawfully interfere with ICNV or with any other newspaper.  When we defend constitutional rights, we do so not just for ourselves, but for everyone in Irvine.

We regret that it took two years — and the expenditure of many hundreds of thousands of dollars — to resolve this matter.  We hope Irvine officials at City Hall, including the Mayor, City Councilmembers, City Manager and City Attorney, will demonstrate a renewed respect for First Amendment freedoms — showing a genuine commitment to protect and promote free speech and all constitutional rights in Irvine.  That has been Irvine’s proud tradition, until City leaders somehow lost their way in recent years.