Irvine Community News & Views is Irvine’s only independent community newspaper — free of developer control.  During the past two years, using charts, graphs and even cartoons (republished, below), we have endeavored to sound the alarm and get City Hall to come to grips with the overdevelopment and traffic crisis that is so harmful to our quality of life in Irvine.

Sad to say, developer influence on Mayor Wagner and his Council majority is far greater than the influence of Irvine’s residents.  That’s why Irvine Community News & Views has endorsed Ed Pope for Mayor, and Jaci Woods and Frank McGill for City Council.  We need to clean house at City Hall, starting Election Day, November 6th. 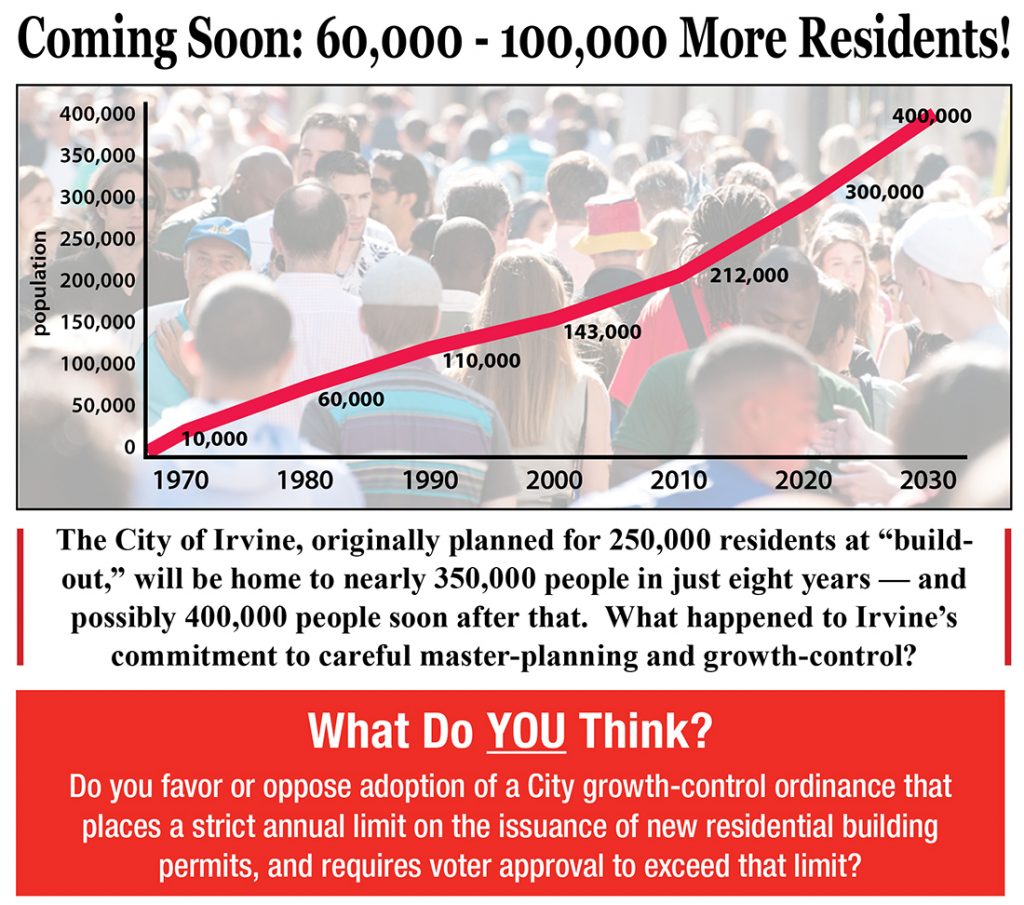 [icon name=”square” class=”” unprefixed_class=””] At the last election, Melissa Fox came to our house canvassing and categorically told me that she was against building more apartments and she would stop the traffic problems in Irvine.  I voted for her and she was duly elected to the Council and voted “yes” on both topics she said she was against.  How do we know that the “NO on B” three — Ed Pope, Jaci Woods & Frank McGill — will not do the same.  Have they been vetted or are they just saying what we want to hear because it will get them votes?
—  S. Myers

Publisher’s Reply:  Yes, ICNV vetted the three candidates.  They were instrumental to the success of the NO on B campaign, working tirelessly, initially helping to collect the 19,164 signatures for the Referendum Petition.  Then, wih Ed Pope forming and chairing the NO on Measure B campaign, and Jaci Woods and Frank McGill’s viral videos, they beat FivePoint.  In case anyone missed that part, all three made a public pledge to begin construction of the Veterans Cemetery as their first order of business on the Council.

[icon name=”square” class=”” unprefixed_class=””] My three votes are going to Pope (for Mayor), and Woods & McGill (for Council).   Their pledge to start building the Veterans Cemetery at its original Great Park location immediately AND to surround the 125-acre site with a forest of trees and trails is brilliant…thrilling.  Let’s get started November 6th, Election Day!
— Pam Smith

[icon name=”square” class=”” unprefixed_class=””] To say the least, the impact of Irvine Community News & Views is mighty impressive.  Though I live far from Irvine, I hope the residents of other towns facing crazy developments will see what you’ve done, and unite to save their communities from being thrown under the bus.
— Herb Neu

[icon name=”square” class=”” unprefixed_class=””] How can we vote “NO on B” — and yet the City Council still talks to the developers?  Isn’t Irvine a democracy?
— Holly Packard

[icon name=”square” class=”” unprefixed_class=””] I love the fact that the “No on B” candidates are not supported by big money.  But, the largest concern for the City that I have is that there is almost zero public transit in Irvine. Whenever I am in Los Angeles I can take Metro everywhere, but in Irvine I have to sit in traffic instead of being in a light-rail train zipping past traffic or in a bus reducing the amount of traffic in the City. Like seriously?  Why does Irvine barely have any bus lines?  That is why I also want Norris to win, because she claims to be dedicated to advocating for public transit.
— Sahand

[icon name=”square” class=”” unprefixed_class=””] I am furious that the majority will is being ignored by the Irvine City Council with regard to the Veterans Cemetery.  Do our views no longer count?
— Lynne Russell Ruedy

[icon name=”square” class=”” unprefixed_class=””] The No on B Team is an example of community dedication at its best. I would not vote for anyone else. In the few short years that I have been an Irvine resident, I have seen the deterioration of this fine city and also witnessed first-hand the predominance and arrogance of developers in this city. Enough. Go Team!!!!!
— Judy Daley

[icon name=”square” class=”” unprefixed_class=””] We are for Irvine residents, and do not want overdevelopment in the Irvine community.
— Dach Mou

[icon name=”square” class=”” unprefixed_class=””] I moved to Irvine in 1976, soon after I retired after a 28-year career of service in the U.S. Navy that included the Korean and Vietnam Wars.  When the idea of a Veterans Cemetery in Orange County was first floated, a bi-partisan coalition immediately emerged.  And, in 2014, all five members of the Irvine City Council enthusiastically approved donating 125 acres of land in the Great Park.  Now, let’s vote for a Mayor and Councilmembers who will actually build the Cemetery: Pope, Woods and McGill!
— Sam Castello

[icon name=”square” class=”” unprefixed_class=””] The most important reason that voters must vote for all three NO on B Council candidates is because that’s the only way we residents can win the required 3 seats and retake control of the City Council.  FivePoint only needs to win one seat to retain control.

Developer FivePoint has been earning an excess of hundreds of millions of dollars in revenue solely by virtue of a complicit City Council.  They have been and are willing to continue spending unlimited cash in their campaign in support of their surrogate candidates and to oppose their opponents.

The NO on B campaign has created a substantial base of voters out of the 28,638 voters who opposed Measure B, to support our NO on B Team of Three — (Ed Pope for Mayor; and Jaci Woods and Frank McGill for Council).  Thus, the battle is really between the candidates funded by FivePoint and the NO on B Team of Three.

As a consequence, any vote for any candidate other than the NO on B Team is most likely helping FivePoint.  FivePoint only needs to win one seat to retain control of the Council, while the residents need to win ALL three seats (the Mayor and two Council seats).
— Harvey H. Liss

Letters to the editor are welcome.  Please include your name and ZIP code.  Letters for publication must be addressed to Editor,

Letters may be edited for publication.  Unpublished letters will not be acknowledged or returned.