We devote our Open Forum/Community resident sentiment regarding Measure B on the June 5th ballot. Measure B is the unpopular ballot measure promoted by three members of the City Council (Mayor Donald Wagner and Councilmembers Christina Shea and Melissa Fox) and developer FivePoint. A “yes” vote on Measure B would replace the long-planned Veterans Cemetery in the Great Park with more than 800,000 square feet of office, commercial, and industrial development, and would relocate the planned Veterans Cemetery 3 miles away — next to the I-5/I-405 interchange, known as the El Toro “Y”.

Below, we have published the latest poll results, along with notes and comments from readers who have taken our Irvine Community Poll. We have decided to keep this poll open for yet another month, because it provides a continuing platform for our readers to express themselves…and for us, at ICNV, to identify whether there are day-by-day, week-by-week trends emerging in the run-up to the important June 5th vote. 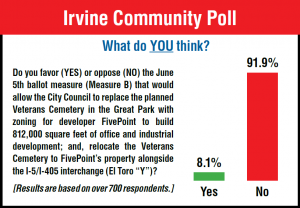 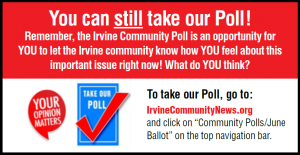 What this City Council is doing is a disgrace. The Veterans Cemetery was approved years ago at the Great Park, and that is where it belongs. As 42-year residents of this City, having raised two wonderful children here, I think my wife Luz and I deserve a voice in this. We love this City and strongly disapprove of the zoning change (Measure B) being proposed. There is only one word to describe what is being attempted here…GREED! What better place to honor our fallen members of our military than a former military base — as was originally decided, not some strawberry field next to a busy freeway. For what it is worth, I am a veteran myself, and I can only add this: SHAME, SHAME on three members of the City Council.
— Alfred Jacques

As a veteran, I find it discouraging that common dignity and the social virtues of respect, honor, and community are at risk of being replaced by corporate greed, steel towers, and pollution.
— Joshua Dayhoff

Irvine repeatedly votes to keep the Veterans Cemetery in the Great Park as was originally planned. Why won’t the City Council listen to the majority? Say “no” to corruption and greed!
— Albert Lee

We want the Veterans Cemetery at the Great Park, where it was planned to go. End of story! We do not want the FivePoint industrial development! Irvine is one hot mess of traffic right now. Any more traffic would bring gridlock. The Irvine City Council needs to stop!
— Patricia Fletcher

There has been too much residential growth in the City already. Our roads are congested to the point of insanity! Enough is enough!! And the Veterans Cemetery should remain in the Great Park as it was originally planned.
— Cheryl Higley

We are sick and tired of the Irvine City Council being owned by developer FivePoint. They have been destroying our City with uncontrolled building, adding more and more people and cars on the roads. Replacing and rezoning the Veterans Cemetery site will add more businesses, more residences, and more cars to our already congested City. Please, Vote NO on Measure B!!
— Bella Yaffi Sevy

Irvine has become ridiculously beholden to the developers. Traffic is horrific. What a slap in the face to our veterans by the majority of City Councilmembers. Let’s proceed with the original plans that have already been approved! Why give away land?
— Cindy Eddleman

Measure B would allow more density in Irvine. It will create more traffic problems, and it is not part of the planned community concept that has made Irvine a desirable city. This is nothing more than greed on the part of three members of our City Council and a developer that stands to make money.
— Marshall Goldman

The FivePoint sleight-of-hand is crony capitalism at its worst. The three traitorous Councilmembers who are supporting this measure should be jailed.
— Tim Hoffman

Why not have the Veterans Cemetery in an area where it is quiet and peaceful so that friends and family members can visit the graves in peace? And move the office and industrial entities to an already busy, freeway-accessible area? It’s just common sense.
— Sandra Timberlake

Developer FivePoint only has an interest in building more and more, which means more traffic on our already congested streets. FivePoint will be putting millions in PACs [Political Action Committees] to confuse the voters. Please, Irvine residents, remember that a NO vote on Measure B means NO to more traffic.
— Gail Lewis

Irvine is already overdeveloped. We do not need additional provision for even more development that will only create additional gridlock for our streets. A few of our City leaders seem to only be concerned with accommodating developers and not residents of this once great community.
— Dennis J. Lowry

My husband and I have been for this Veterans Cemetery in the Great Park since the idea was first generated. My husband was a Naval officer and we’ve lived our nearly 56 years of marriage here in Orange County. This is where we want to be buried. For us, time is running out. It is important that the Veterans Cemetery be where it was originally planned, on the former military base, in the Great Park.
— Susan Selman

What happened to common decency and planned open spaces instead of profiteering?
— John Tucker

The Great Park is supposed to be public, recreational parkland. I am opposed to turning a big piece of it into privately owned commercial property with no benefit to the citizens of Orange County whose public land would just be taken away. The people voted to turn the El Toro Marine Corps Base into the Great Park. No one approved a private property giveaway.
— Alison Taub

In Irvine, we need to keep our open spaces and parks and not replace them with commercial development and business buildings.
— Gaurang Yodh

We’re getting very tired of our “great” Park being sold off to the highest bidder. There needs to be an investigation.
— Sam Pawley

Shame on the Irvine City Council for ignoring the 19,000 petitioners regarding this issue and spending taxpayer money on a referendum!
— Ernestina Benson

Enough is enough. This unbridled development is destroying our quality of life. This trio of Wagner, Shea & Fox needs to be thrown out of office.
— Dom Saccacio 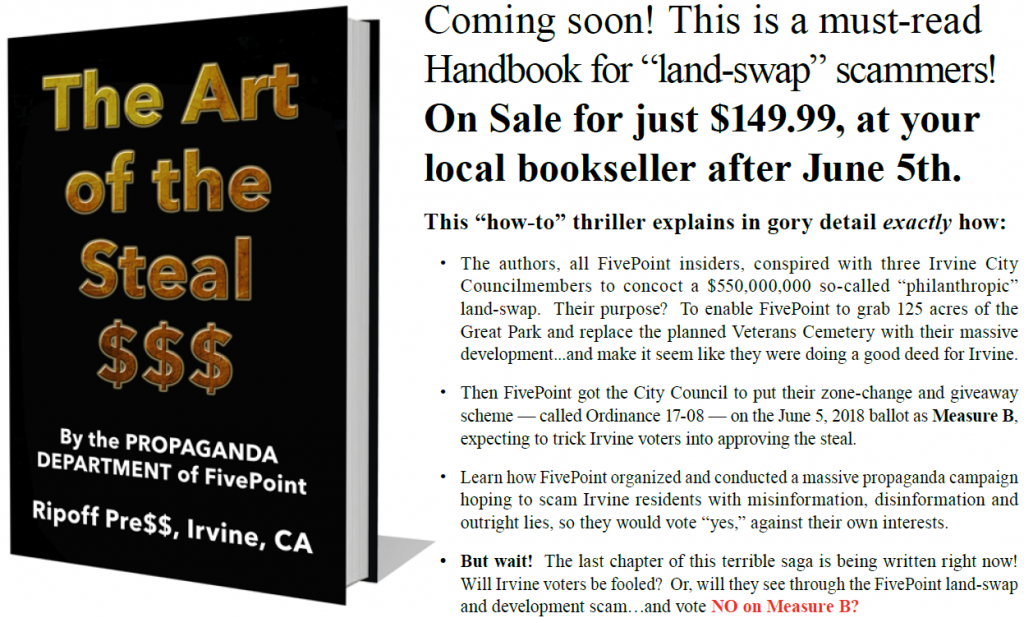