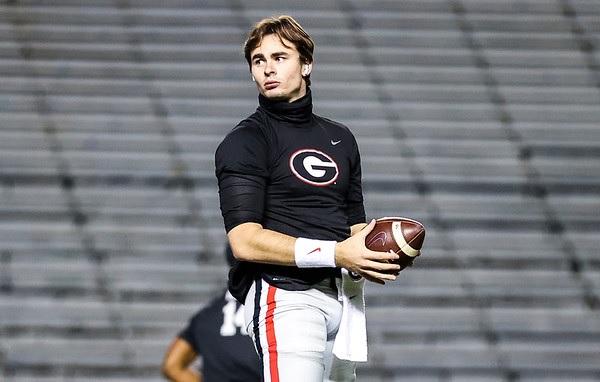 But did you know that JT spent his childhood here in Irvine? He graduated from high school a year early so that he could play football for USC in 2018 at the age of 17.

JT’s impressive 12,014 career passing yards in Orange County set a record, as did his 152 touchdown passes.  He led Mater Dei to a 38-4 overall record in his three seasons, the California Interscholastic Federation (CIF) state title and the Number 1 national ranking in 2017.

While playing for USC, JT started in all 11 games during the 2018 season as a freshman as well as the opening game in 2019 before tearing his ACL.

After recovering from his injury, JT decided to transfer to the University of Georgia for the 2020 season where he has continued to receive accolades.  In fact, JT made his debut as a Bulldog in late November.  In that game, he completed 28 of 38 passes for 401 yards resulting in four touchdowns against Mississippi State University. Those stats won him the prestigious Manning Award Player of the Week. He was also named the Maxwell Award Player of the Week and the Southeastern Conference Co-Offensive Player of the Week.

JT followed that performance up on December 12th against the University of Missouri when he completed 16 of 27 passes for 299 yards, and threw three touchdown passes that resulted in a 49-14 win for his team.

Irvine Community News & Views congratulates JT on his many successes!