In a single up-or-down, “yes” or “no” vote, on June 5th Irvine voters will decide two issues that are folded into one ballot measure — Measure B. The vote on Measure B will finally determine the location of the long-planned Veterans Memorial Park and Cemetery, and also the location of 812,000 square feet of office and industrial space. That’s the part of Measure B giant developer FivePoint wants to keep secret.

Very simply, if Measure B passes, the long-planned and CalVet-approved Veterans Cemetery gets moved from the Great Park to a location alongside the busy, noisy I-5 & I-405 Interchange (the El Toro “Y”). At the same time, FivePoint would get development rights to build huge office, manufacturing and industrial projects, followed by massive apartment buildings with up to 50 units per acre at the Great Park in the heart of north Irvine, along Irvine Boulevard. The FivePoint “land-swap” and development scheme — which would be triggered by a “yes on B” vote — would bring 10,000 cars and trucks daily to Irvine Boulevard, Sand Canyon, Jeffrey and other major streets and neighborhoods in north and central Irvine.

A “NO on B” vote will leave the Veterans Cemetery in the Great Park, as originally planned and approved (2014-2016) by the City, State (CalVet) and the U.S. Department of Veterans Affairs. A NO on B vote would also deny any new or additional zoning and development rights to FivePoint.

The battle lines are clearly drawn in the June 5th showdown election. It is a classic David vs. Goliath struggle between giant developer FivePoint (Yes on B) and a grassroots committee of Irvine residents, including hundreds of Irvine veterans and volunteer citizen-activists (NO on B).

Any doubt about developer FivePoint’s determination to garner Yes on B votes was erased when, according to April campaign filings, FivePoint donated a record-breaking $600,000 to their Yes on B political committee, presumably a down-payment on a multi-million-dollar campaign. 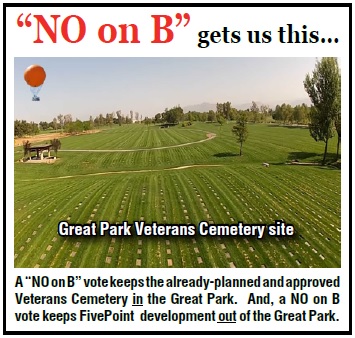 Citizens Fight Back — NO on B!

For seven months now, Ed Pope, a 46-year resident of Irvine, has chaired an Irvine citizens’ committee to Save the Veterans Cemetery • NO on B! Pope, himself a U.S. Army veteran, and now a retired award-winning high school teacher, did not mince his words: “The mask has finally been ripped off. Just as we have warned the Irvine community, the real face of the Yes on B campaign is developer FivePoint.”

Pope continued: “FivePoint stands to reap enormous profits from their Measure B land-grab and development scheme. They’re obviously prepared to spend millions on a deceitful campaign that could bring them $1 billion or more in quick profits.”

Pope added, “If Measure B passes, FivePoint gets the profits. We get the overdevelopment and the traffic, and the loss of our Veterans Cemetery in the Great Park.”

“Remember this,” said Pope, “Every Yes on B piece of mail, every TV ad, every ad on the Internet — the lies, the misleading and deceitful claims — they are all coming from FivePoint. Their name may not appear, but you can be sure they paid for it.”

Pope concluded with this plea: “I hope Irvine voters will do what I do — ignore the Yes on B messages. Throw away (or recycle!) their political mail, and just double your resolve to Vote NO on B. Keep the Veterans Cemetery in the Great Park, and stop the FivePoint development scheme.” 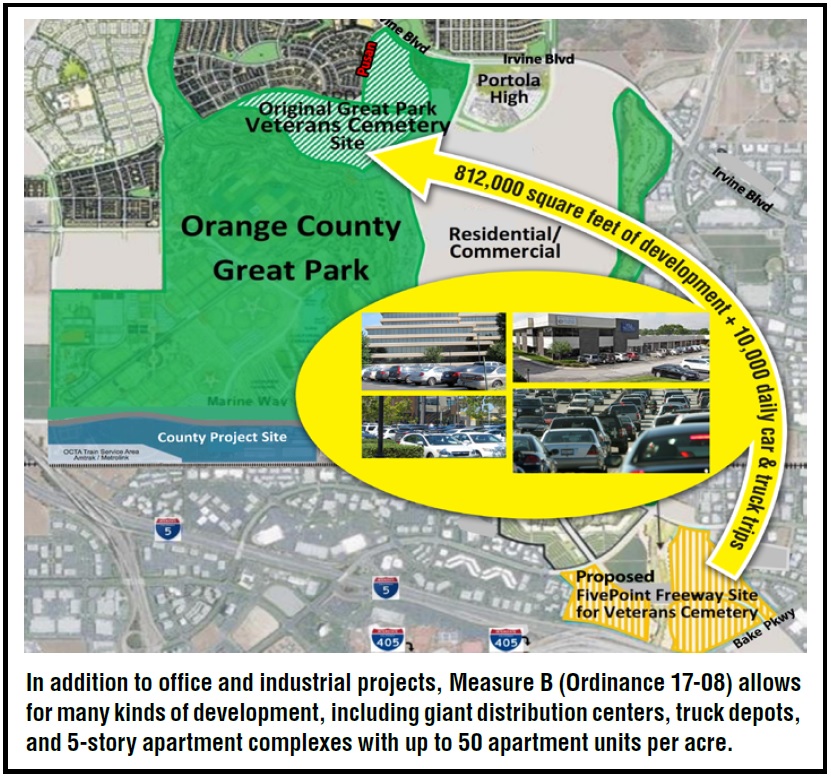