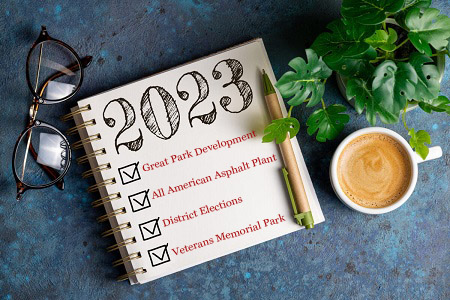 For most of us, the beginning of the year brings a renewed sense of optimism and hope. When it comes to the Irvine City Council, I am cautiously optimistic that many of the contentious items from last year may be overcome.

Sources tell me that four critical issues facing our City will be discussed by the new Council in January:

Last year, the City Council — on a 4-1 vote with Councilman Larry Agran voting NO — preliminarily approved hundreds of millions of dollars for major development projects in the Great Park, even though the plans had not been reviewed by the public, or the City’s own Planning Commission, Transportation Commission, or Finance Commission. After backlash from the community, the new Council appears to be more receptive to listening to constituents (and the City’s commissioners) before pushing forward.

For the past several years, the Council has taken a “let’s wait and see” approach when it comes to addressing the public health crisis that has erupted in north Irvine as a result of the All American Asphalt plant. However, it appears the new Council is taking the matter much more seriously and seems to be motivated to shut the plant down once and for all.

District Elections was also stalled last year when Councilmember Tammy Kim vigorously opposed the City’s transition to the more equitable system of electing members to the City Council. During last year’s election, now-Councilmember Kathleen Treseder indicated she supports district elections. So, there is a good chance that Irvine may finally be joining every other major city in the County (and across California) by allowing residents to elect their own Councilmember to represent their district. (The Mayor would continue to be elected by all Irvine voters.)

We’ll have to watch the next few Council meetings to see if this new Council really will work together on behalf of the City’s residents to deliver on the promises they have made. Stay tuned!