For more than a year, Irvine Unified School District (IUSD) officials have refused requests and ignored petitions to conduct comprehensive testing for toxic petrochemicals, claiming that previous, limited testing at the school site was adequate.

In a stunning development, amid growing anxiety and recognition that there may be extensive, site-wide toxic contamination at Portola High School, the California Environmental Protection Agency (EPA) has ordered IUSD to conduct testing for toxics at the 40-acre site — where the $300 million high school is in the final stages of construction. Located along Irvine Blvd. near Lake Forest, Portola High School is scheduled to open in August.

In a March 2, 2016 letter addressed to IUSD officials — with a separate copy to former Irvine Mayor and Councilmember Larry Agran — Director Barbara A. Lee of the California Department of Toxic Substances Control (DTSC), writing on behalf of California EPA Secretary Matthew Rodriquez, reported that DTSC had concluded that “further subsurface sampling should be conducted at the site” in order to determine “the potential presence of contaminants that could pose a threat to the health of individuals who attend classes or work at the school, or people who might otherwise use the school’s property.”

Director Lee’s update and official orders — in response to Agran’s August 31, 2015 letter to Governor Jerry Brown and subsequent communications with DTSC — made it clear that Irvine’s Portola High School was being built on a former national Superfund site that had not been properly tested for decades-old petrochemical contamination. This toxic contamination likely resulted from military aircraft operations and widespread dumping of fuels and solvents that occurred at the former El Toro Marine Corps Airbase, beginning in 1943. 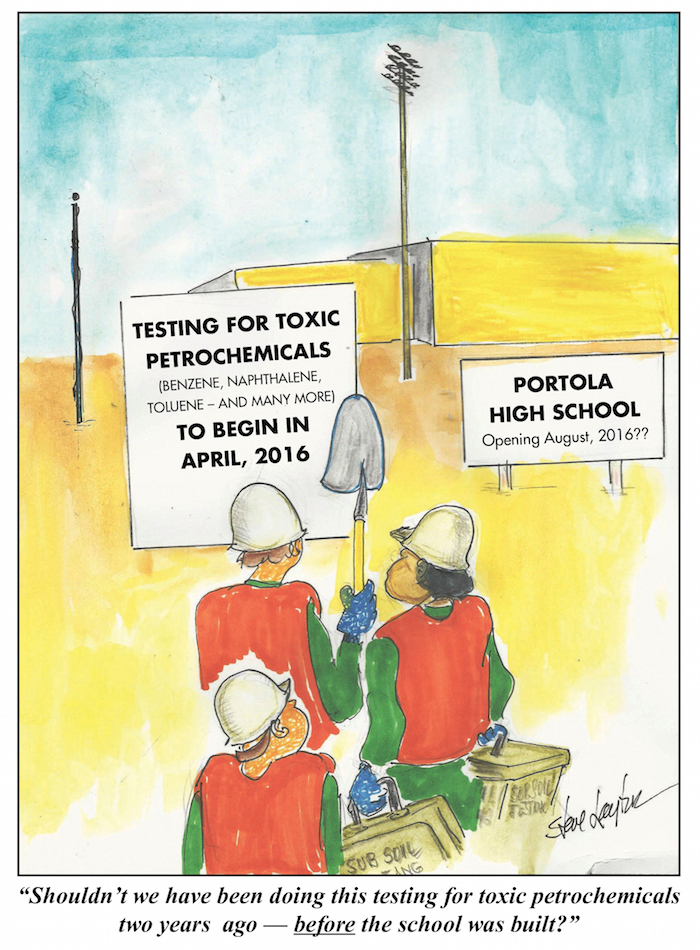 The State orders included direction to identify the sources of the toxic contamination, and to prepare a site-wide risk assessment report — to determine “risk estimates for exposure to subsurface contaminants to both students and faculty.” This risk analysis would review the levels of toxic exposure at the high school site and the projected diseases, disabilities, and even “excess deaths” among teachers, staff, and students.

DTSC officials had been reviewing the Portola High School matter for months to analyze the evidence — previously reported in the Irvine Community News & Views (ICNV) — that prior testing of the site was inadequate. Testing performed in 2014 had not included soil and soil-gas testing of the interior 35 acres of the site to search for toxic and cancer-causing volatile organic compounds (VOCs), such as benzene, toluene, ethylbenzene, as well as xylenes (BTEX), tetrachloroethene (PCE), and trichloroethene (TCE).

Beginning in March of 2015, Franklin J. Lunding, publisher and editor-in-chief of ICNV, commissioned a multi-part series and subsequent special articles on the Portola High School site contamination story. The articles were researched and written by Harvey H. Liss, Ph.D., a Registered Civil Engineer and former Irvine Planning Commissioner. They are available on Dr. Liss’s own recently established website and blog, www.TestForToxics.org.

Amid a growing sense of crisis, IUSD called a Special Meeting of the School Board for March 22nd — intending to submit a “work plan” for perfunctory toxic testing to the State the very next day. This was in apparent violation of the DTSC directive that “the proposed sampling activities should be discussed with…the public and other interested stakeholders, prior to the formal submittal of the work plan” to the State. The short notice and hurried schedule, as well as the School Board’s meeting format, made it clear that there would be no real public discussion, and that the Board did not intend for public comments to have any effect on the work plan.

An overflow crowd of more than 100 residents attended what turned out to be a 4-hour School Board meeting that didn’t end until after 11 p.m. About two dozen people testified, most of them making impassioned and personal public comments asking for testing of virtually the entire interior of the school site. One after another, residents expressed shock that there had been no testing for toxic and cancer-causing VOCs on the site’s 35-acre interior, even though these dangerous petrochemicals, in large quantities, had been discovered along the lengthy perimeter of the school site two years ago.

One resident, Ed Pope, a retired teacher and former Orange County Teacher of the Year, directed his ire at Superintendent Terry Walker for attacking others for doing the very thing he was doing — “misrepresenting the facts and misleading the public about toxic contamination.”

For a number of days before the meeting — and at much of the March 22nd meeting itself — the School Board members and IUSD staff appeared to resist and resent any State orders to undertake toxic testing. The toxic testing draft work plan that was presented by IUSD mentioned only 8 soil-gas test well locations for the interior of the Portola High School site. (This was increased to 10 shortly before the meeting.)

Citizens balked at the small number of test wells. At more than 3 hours into the meeting, Superintendent Terry Walker re-stated and answered a resident’s earlier question: “Is there the possibility that we would delay the project?” Walker replied: “Of course.” A few minutes later, he added, “We would like to have 100 percent confidence that this site is safe.” This earned audience applause and later comments from anxious residents and parents of school kids that it appeared that the Superintendent finally “got it.”

As the meeting ended, Board president Paul Bokota and DTSC staff appeared to agree that the proposed 10 test wells should probably be doubled to a total of 20 test wells drilled mostly at depths of 16 to 20 feet, with testing to commence in April. The testing will be followed by publication of the results, including preparation of a comprehensive analysis of health and safety risks to teachers, staff and students who will occupy Portola High School. The School Board has two regularly scheduled meetings this month — April 12th and April 26th. Presumably, each meeting agenda will include a public report on the status of the toxic testing and site-wide risk analysis required by the State in its March 2nd letter and directives.

Irvine Community News & Views will continue to cover this story. For the most current information, go to Dr. Harvey Liss’s website and blog, TestForToxics.org.