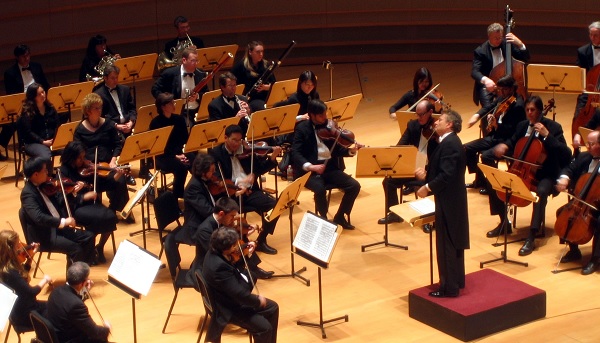 The Mozart Classical Orchestra (MCO) is celebrating their 35th anniversary at the Barclay Theatre in Irvine!

The Mozart Classical Orchestra is a hidden musical treasure in Irvine, a chamber orchestra comprised of 24 to 37 professional musicians, depending on the program.

The orchestra performs not only Mozart’s music, but also rarely-heard works of other well-known composers as well as under-performed but brilliant works of sometimes little-known composers.

All four concerts of the season are performed at Irvine’s Barclay Theatre, on the UCI campus on Sunday afternoons, beginning at 3pm.

Grand Opening:  Sunday, October 20, 2019
The season opens with the celebrated Haydn Trumpet Concerto, what many have called his greatest contribution to the short list of works in the trumpet solo repertory.  The featured soloist will be MCO principal Tony Ellis.

A collection of Viennese dances by Lehar, in a newly minted edition by Ami Porat, crafted for a chamber orchestra setting, will open the program.

The program will close with Haydn’s C major Symphony, No. 60 — a masterpiece in motion, a vibrant and humorous work that contributed to Haydn’s musical immortality well beyond Vienna.

Happy Birthday Mozart:  Sunday, January 19, 2020
A celebration of the orchestra’s namesake will come to life with a program honoring Mozart’s 264th birthday anniversary.  This annual program will open with another re-orchestrated-for-chamber-orchestra masterpiece by Strauss, the Roman Carnival Overture.

Violoncellist Laszlo Mezo, will be featured soloist in Mozart’s Concerto K. 447, a master work originally written for the French horn and arranged for violoncello by Ami Porat. A less-performed yet superbly crafted Symphony No. 34 by Mozart concludes this program.

Strings Attached:  Sunday, March 8, 2020
This concert will feature some brand new orchestrations in the “Invitation to the dance” section, a collection of dances by Bartok, Brahms and Strauss. Originally written for various instrumental combinations, the collection will be presented in a string orchestra setting.

The Tchaikovsky Adagio from Souvenir de Florence and the string orchestra version of the haunting Mozart quartet in D minor, K. 421 closes the festivities.

Season Finale:  Sunday, April 5, 2020
In a deal literally signed on a napkin in a bar, Mozart agreed to write “some music” for the flute.  The Concerto in D major was one the works, to be performed by the principal flutist of the MCO, Patti Cloud.

Suite No. 2 by J. S. Bach will open the concert and Haydn’s Symphony No. 39, in G minor closes the season.

Individual ticket prices are $29 for students and $52 for adults.  You can purchase individual tickets by calling the Barclay Theatre box office at (949) 854-4646.

To purchase a full season subscription (which includes all four concerts), please email MCO at info@mozartorchestra.org 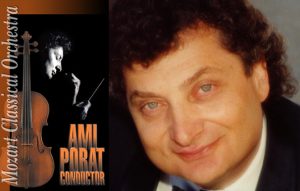 Founded as a professional ensemble in 1985 by Dr. Ami Porat, as the still current music director and conductor, the MCO presents a balanced sampling of works that reflect a theme or idea that serves as the basis for an educational as well as an enjoyable concert.  All programs are intended to reach the widest audiences possible.

Since its inaugural season, the Mozart Classical Orchestra has earned the highest critical acclaim from the Los Angeles Times and the Orange County Register.  It has garnered praise for its performance standards, for the quality of its guest soloists, and for the intelligence with which its programs are chosen.

Maestro Porat, the MCO’s Music Director and Conductor, is a multifaceted musician with a Diploma from the Rubin Academy, in Tel Aviv, in contrabass and piano, a Bachelor of Music degree from Juilliard and a Doctorate in conducting from the University of Southern California. Under the guidance of Isaac Stern, Dr. Porat continued his musical education at the Juilliard School of Music after winning the prestigious America-Israel Cultural Foundation’s Grand Prize in Israel.  He studied contrabass with Gary Karr and conducting with Jean Morel, while conducting his own chamber group in New York City.  In the years that followed, Ami Porat played in orchestras in Europe, the USA and in South America as bassist and principal bassist, learning seven languages in the process and performing under Leonard Bernstein, Carlo Maria Giullini and many other great conductors.