More Than 1,000 Constituents Gather At Town Hall In Irvine, But Congresswoman Mimi Walters Refuses To Attend

The atmosphere was electric Tuesday night at Northwood High School, in the northern reaches of Irvine.  More than 1,000 people packed the high school’s gymnasium to attend a “Town Hall Meeting with or without U.S. Rep. Mimi Walters.”  The parking lots surrounding the school were jammed with more cars than I’ve ever seen at Northwood High — with police nearby to help make sure everything ran smoothly.  (Note: I graduated from Northwood High School in 2006.) 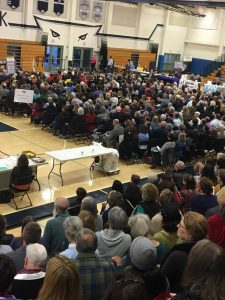 A group of organizers who call themselves the CA45th organized the weeknight town hall, in hopes of talking with Irvine’s Congresswoman Mimi Walters, who has made herself virtually unreachable to thousands of her constituents.  The organizers of the town hall have repeatedly visited the Congresswoman’s district office and tried to connect with her staff to coordinate a date that worked for everyone.  Without a positive response, they decided to organize a town hall themselves, as they put it, “with or without Mimi Walters.”

As hundreds streamed into the gymnasium, they were greeted by representatives of various local political organizations, at tables set up centrally on the floor of the gym.  Groups such as the Laguna Woods Democratic Club, Together We Will OC, and Healthy California were collecting sign-ups and handing out literature.  Each person was handed green and red half-sheets of craft paper to hold up when one of the speakers said something they agreed with (green) or disagreed with (red).

There were four expe 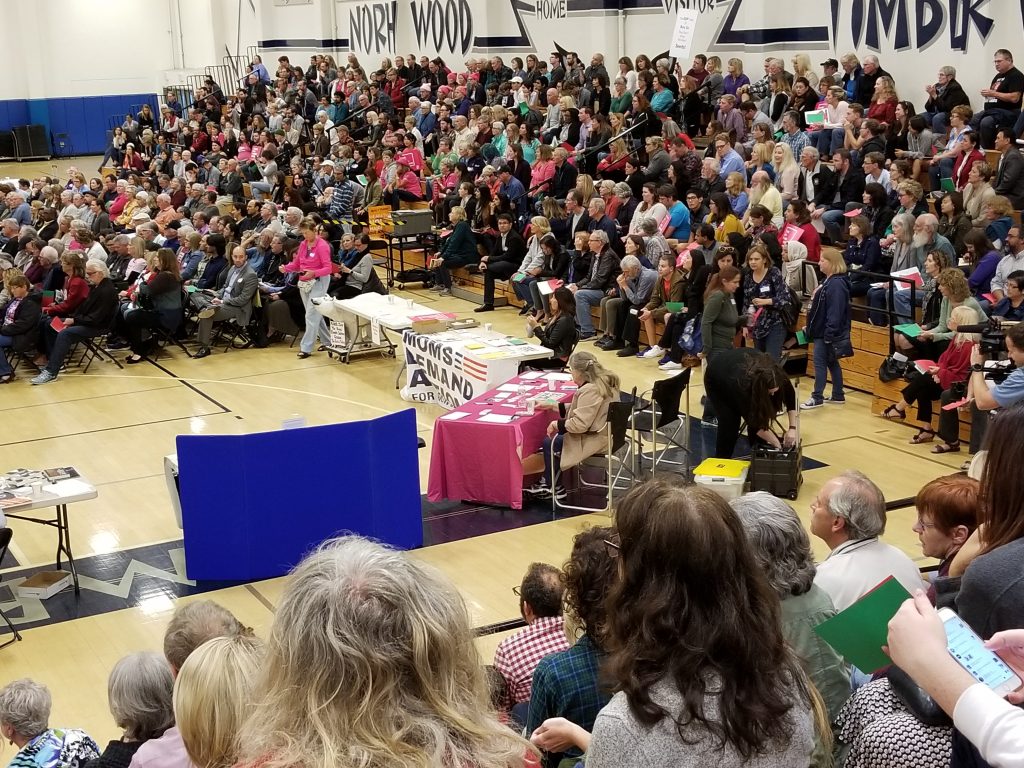 rt speakers in the program’s schedule.  Dr. Nanette Fritschmann, a Special Education Professor, spoke on the topic of public school education.  She was followed by Law Professor Jennifer Koh, on immigration issues; Roger Gloss, on climate change; and ER Physician, Dr. Bill Honigman, on healthcare.  The engaging format, conducted by lawyer-and-moderator Sean Garcia-Leys, had each expert introduced by playing a noxious sound bite by Congresswoman Walters related to each expert’s topic.  This was followed by the expert’s response and a lively Q&A sesion with the audience.

On every issue discussed, Congresswoman Walters was either totally in line with President Trump’s position, or she held an unknown or hard-to-discern position, loaded with what one activist called “weasel words.”  Seeing the frequent sea of red or green, held up each time a statement activated the audience emphasized the unity of the group, except for one poor soul who appeared to be there simply to agitate the crowd.  In a comment he made about healthcare, this individual characterized immigrants as a big negative and chanted “build the wall.”  Luckily, it was a completely non-violent audience, but the roar of disapproval seemed to cut off his microphone, even as others shouted, “let him speak.” 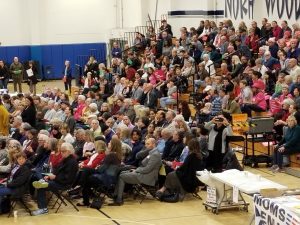 Organizers believe the big turnout will put pressure on Congresswoman Mimi Walters, who is up for reelection in 2018, to hold her own town hall to finally meet with her constituents and listen to their concerns. 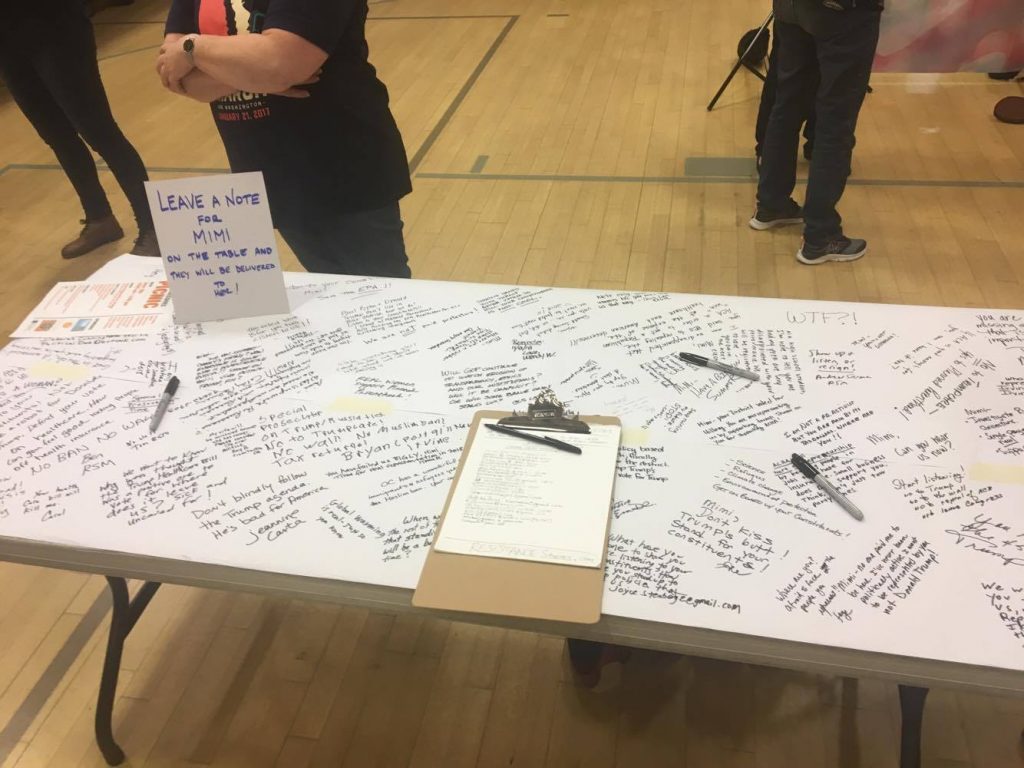 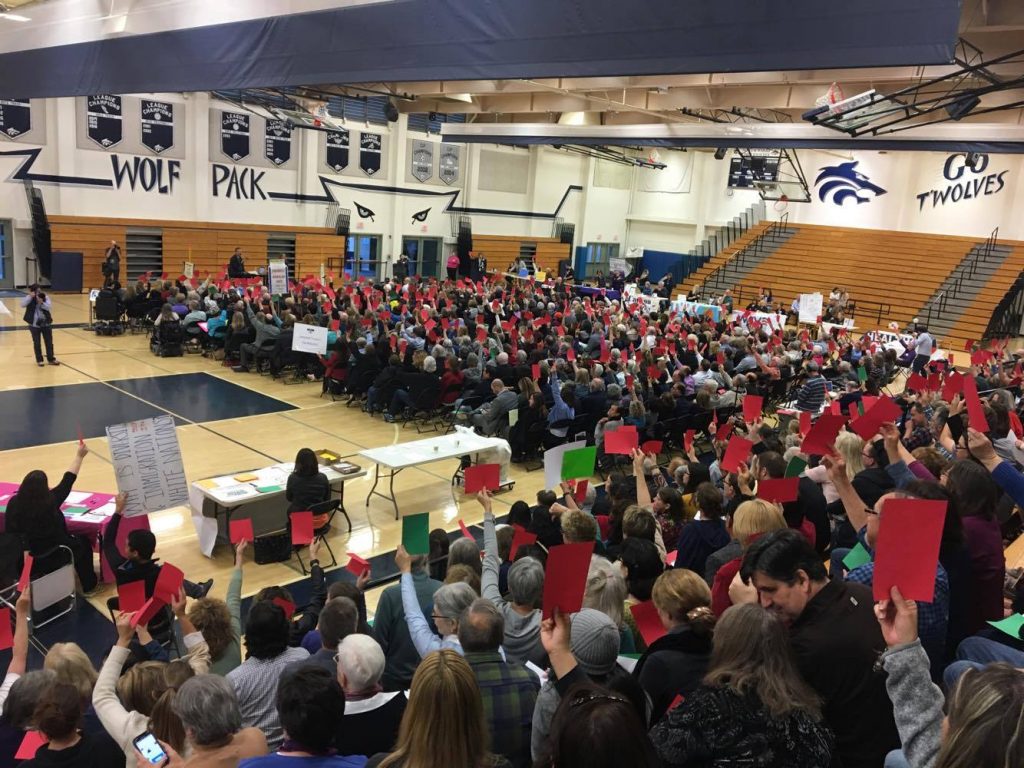 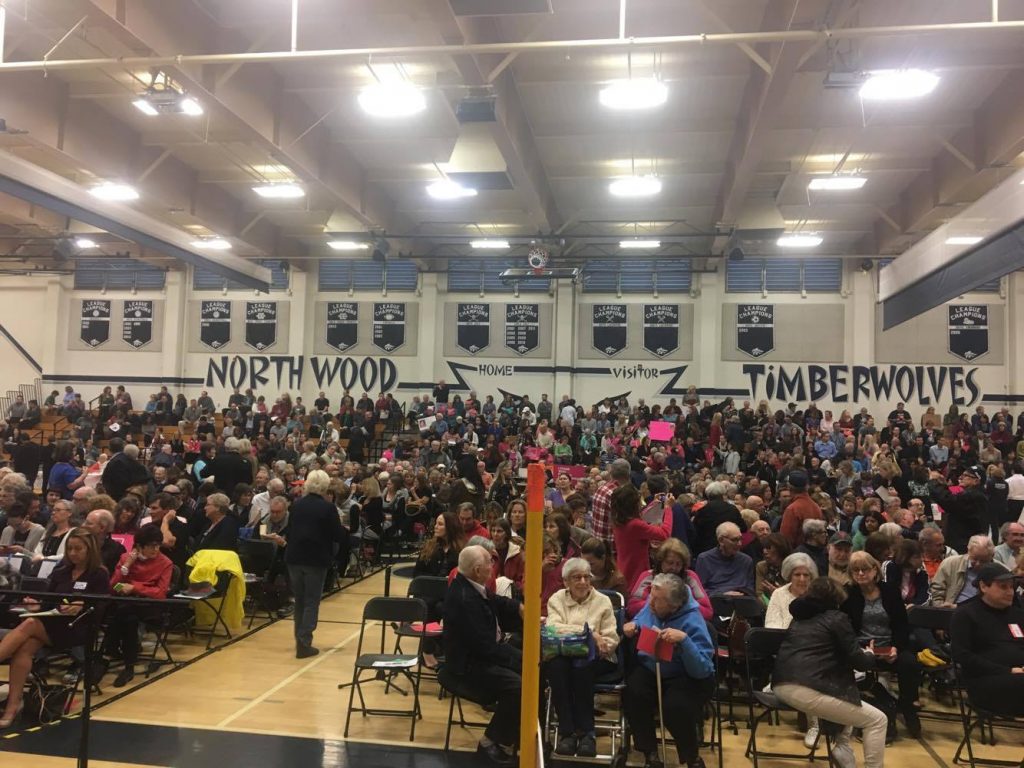