Will Irvine Voters Say “Yes” or “No” to More Development and More Traffic? 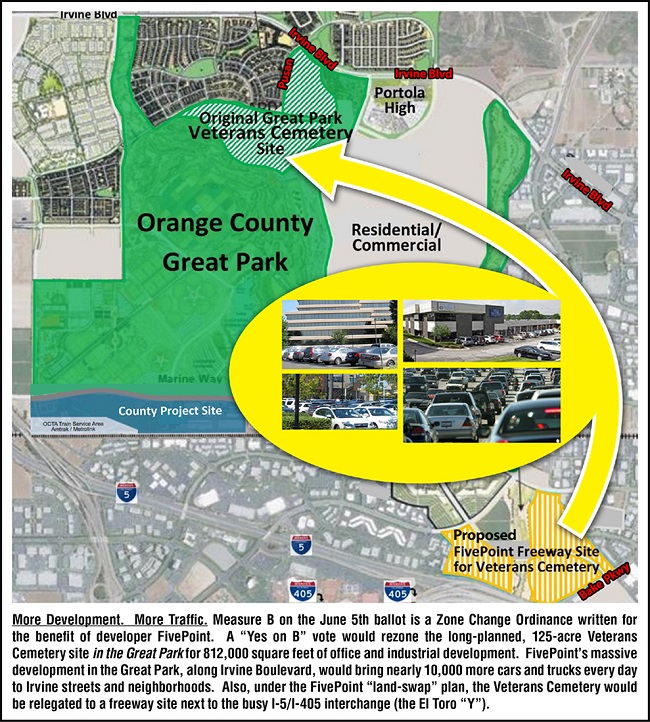 Giant land developer FivePoint Communities is telling Irvine voters that a “yes” vote on Measure B is a vote for a Veterans Cemetery. But is it, really?

“In a word, NO!” says Mary Ann Gaido, former City Councilmember and long-time Irvine Planning Commissioner. Gaido recently took the City to court to prove that Measure B, on the June 5th ballot, is really about a FivePoint land-development scheme. Its purpose, she says, is “to replace our previously approved Veterans Cemetery in the Great Park with massive office and industrial development.”

On April 6th, Gaido won the argument in Superior Court, getting a favorable ruling from Judge Walter Schwarm. But will she and the grassroots NO on B campaign win on June 5th, when Irvine voters have the chance to say NO to Measure B once and for all? We’ll soon see.

Gaido filed her court case against the City and developer FivePoint in February, asking the court to compel the City Council to honestly disclose to Irvine voters what Measure B is about. “The plain truth,” says Gaido, “is that a vote for Measure B is a vote for Zone Change Ordinance 17-08.” But Ordinance 17-08 isn’t about a Veterans Cemetery at all. It’s a lengthy, complicated Zone Change Ordinance with more than 12,000 words and big tables that are all about granting ownership and development rights to FivePoint to build office and industrial projects on 125 acres in our Great Park — on a site that was previously designated and approved (2014-2016) for a Veterans Memorial Park and Cemetery.”

Ordinance 17-08, which is now known as Measure B on the June 5th ballot, would replace the Veterans Cemetery in the Great Park with 812,000 square feet of FivePoint development: office, manufacturing and industrial projects yielding hundreds of millions of dollars in profits for the developer. Meanwhile, if Measure B passes, the long-planned Veterans Cemetery in the Great Park would be relocated to a site three miles away, alongside the busy, noisy I-5/I-405 freeway interchange, commonly known as the El Toro “Y”. 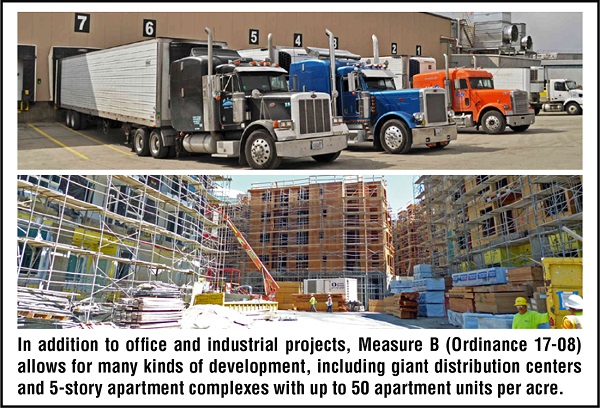 “Incompatible” Development in the Great Park

When the entire “land-swap” and land-development scheme was approved last year on a 3-to-2 City Council vote, Councilmember Lynn Schott decried the move as a “giveaway of our Great Park” to developer FivePoint, and an insult to Irvine veterans and veterans everywhere.

Schott’s appointed Planning Commissioner, Patty Bartlett, said the FivePoint land-swap scheme would bring development that is “incompatible” with the Great Park and with the surrounding north Irvine neighborhoods, where tens of thousands live in quiet, residential villages and neighborhoods.

In fact, according to City studies, the land-swap and resulting development would bring nearly 10,000 added daily cars and trucks to Irvine Boulevard and other already-congested roads — Sand Canyon, Jeffrey, Bryan, and Trabuco. Compare this with the planned Veterans Cemetery in the Great Park that, according to the same City traffic studies, would generate fewer than 500 car trips per day — mostly from Cemetery workers, occasional funeral services, and gravesite visitations.

A senior planning consultant, speaking on condition of anonymity, after a recent City Council meeting, said: “This is a moment of truth for Irvine. If voters approve Measure B, you can expect yet much worse traffic, including real gridlock in many parts of town. Measure B means saying goodbye to the Irvine General Plan and any semblance of a Great Park plan that properly honors veterans and their service.”