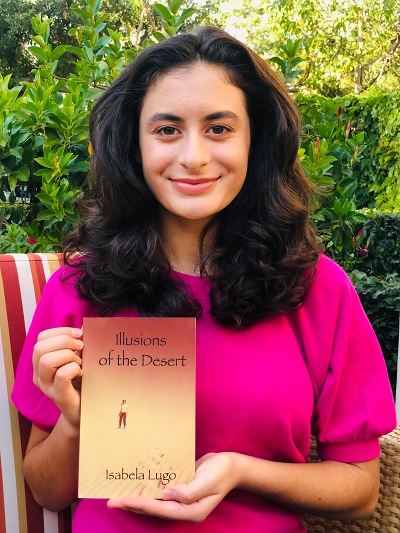 Isabela Lugo is just 15 years old and is already a self-published author, having recently released her first book: Illusions of the Desert.

Isabela has grown up here in Irvine, attending Woodbury Elementary School and Jeffrey Trail Middle School. Since the start of the pandemic, Isabela has been enrolled at Irvine Virtual Academy where she is now in tenth grade.

Isabela says her love of writing (and reading) was sparked when she was 9 years old. Her mother purchased “this big, thick, blue book,” according to Isabela. As a third-grader, she remembers being discouraged by the book’s size and small typeface.

A few weeks later, she picked up the book — Harry Potter and the Order of the Phoenix. Within a couple of chapters, Isabela was totally immersed in the fantasy world.

Isabela told us: “I couldn’t take my eyes off the book, though I soon realized that I needed to start from the first book in the series since that one was the fifth and I didn’t understand all of the references. I spent the next few months completely lost in all of the stories. That series introduced me to the power of reading. By the time I finished the final book, I knew I wanted to write a fictional world of my own one day.”

And now she has! Isabela’s book (recommended for ages 10+) tells the story of Bree and her friends who embark on a seemingly harmless journey, in an effort to give their families a better life. However, along the way the group realizes they are not actually chasing an extraordinary treasure, but an unforeseen trap. The desert through which they travel is supposed to be a barren isolated wasteland. Little do they know that there are people living there, trapped in time. When Bree is faced with an impossible task, will her bravery and selflessness save her friends … or will she crumble under the weight of her decision?

To learn more about Isabela and how you can purchase her book, click here.