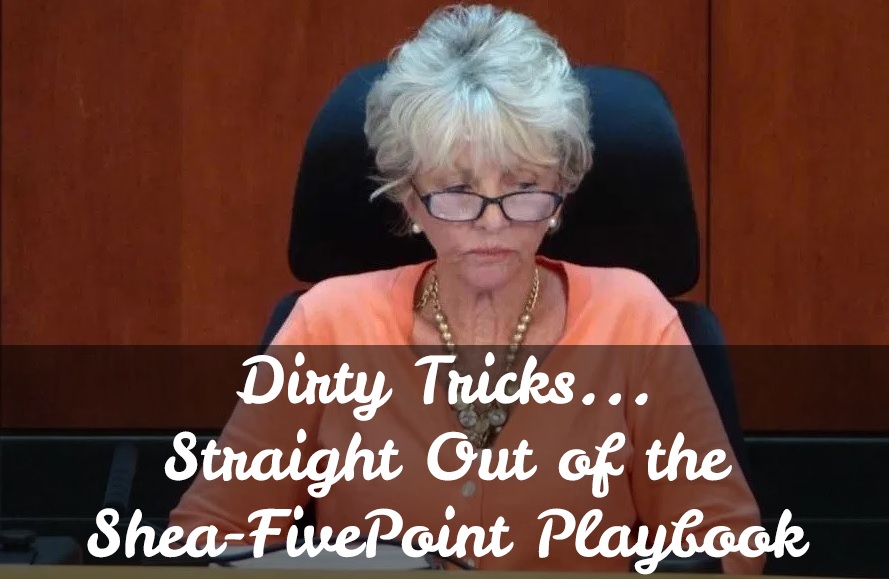 Since the first Council vote back in 2014, Irvine residents have overwhelmingly supported building a Veterans Memorial Park & Cemetery at the 125-acre “ARDA” site on the former El Toro Marine Corps Air Station at the Great Park.

And, for six years, unelected Mayor Christina Shea has been relentlessly scheming with land developer FivePoint to delay, derail, and defeat the Veterans Cemetery.  Why?  Because FivePoint wants the ARDA site for massive development projects. (Since 2016, FivePoint has spent millions of dollars in dark-money political campaigns to get control of the ARDA site, and to support Shea and others in their election campaigns.)

Even after Irvine voters soundly defeated the 2018 Shea-FivePoint land-swap scheme (63% voting NO!) to move the planned Veterans Cemetery from the ARDA site to a FivePoint-owned field alongside the freeway, Shea continues to ignore and undermine the will of the voters.

Last summer, Shea was caught on video bragging about her scheme to stop the State from beginning construction at the ARDA site, saying she had come up with a so-called golf course site as a “diversion tactic.”

Now, Shea is reaching deeper into her dirty tricks playbook.  She is seeking to undermine the work of hundreds of Irvine volunteers who spent months gathering an impressive 19,790 Irvine resident signatures (they only needed 12,888) for a ballot initiative that would designate the ARDA site as the citizens’ once-and-for-all choice for the Veterans Memorial Park & Cemetery.

Ordinarily, the Orange County Registrar of Voters conducts a random sample of petition signatures to quickly and inexpensively determine whether sufficient valid signatures have been submitted to qualify a measure for the ballot. According to City records, Shea apparently demanded that the Registrar count every single initiative petition signature, at a cost to Irvine taxpayers of nearly $60,000.  As expected, the initiative easily qualified for the November ballot.

A Sacramento-based political marketing firm has now been deployed, calling Irvine residents with a sleazy push-poll, attacking the ARDA site while promoting the golf course site. The survey includes several outright lies.  (Irvine Community News & Views will be investigating who is paying for the unscrupulous poll.)

Since the citizens’ Veterans Cemetery (ARDA) initiative has been certified by the OC Registrar of Voters, it goes before the City Council tomorrow (May 12th).  Shea has stated that she wants the Council to put a competing measure on the November ballot to defeat the citizens’ initiative — without gathering a single signature from Irvine residents.  This is yet another dirty trick taken from the Shea-FivePoint political playbook!

Sources tell us that Shea is set to waste even more taxpayer money during Tuesday’s Council meeting by directing staff to create yet another study of the ARDA site.  (CalVet created a 333-page detailed Concept Design Plan for the ARDA site, which was approved in 2016 by both the State and the U.S. Department of Veterans Affairs.)

To learn more about the Build the Great Park Veterans Cemetery citizens’ campaign and how you can help, click here.