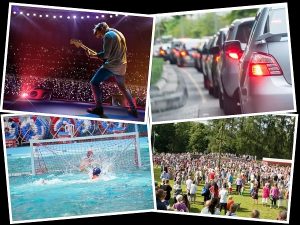 Over the past few years, the temporary FivePoint Amphitheater — which is located just outside of the Great Park — has been a source of aggravation for Irvine residents due to excessive noise and traffic concerns.

Khan, Kuo, Kim and Carroll voted to build a massive amphitheater in the Great Park that will seat 14,000 concert-goers. Think about that. The capacity of the Hollywood Bowl is just slightly larger, with 17,000 seats. It’s a wonderful music venue but if you have attended a concert there, you know that traffic in and out of the area is horrendous … and the noise generated from concerts can be extremely loud, even miles away. Given the fact that the amphitheater will no doubt affect so many neighborhoods here in Irvine, why wasn’t the City’s Planning Commission asked to conduct a thorough review of the project before the Council pushed it forward?

Khan, Kuo, Kim and Carroll voted for a $250 million aquatics & water polo complex, apparently intended primarily for elite athletes. The massive complex, promoted by mega-developer FivePoint, does not seem to offer much in the way of everyday use by our City’s residents. And, it’s still unclear who would be paying for this facility’s construction and upkeep. When the project was originally presented to the Council, City staff suggested that the facility be built using special taxes levied on homeowners in the Great Park neighborhoods.

Khan, Kuo, Kim and Carroll have once again abandoned veterans (and Irvine voters) — this time by attempting to replace the voter-approved Veterans Memorial Park & Cemetery at the Great Park on the former El Toro Marine Corps Air Station. What would they replace it with? A huge, super-sized botanical garden that has nothing to do with honoring veterans or our City’s rich military history.

Not only is their botanical garden project a slap in the face to veterans, it will no doubt become a logistics nightmare. The proposed 125-acre site is about the same size as Huntington Gardens in Pasadena, which attracts 800,000 visitors annually. How will Irvine handle the unending traffic every weekend? And, where are these out-of-town visitors going to park? Who is going to pay the hundreds of millions of dollars to build a botanical garden? And, who is going to pay the tens of millions of dollars in annual maintenance fees?

With absolutely no thought given to proper planning — or input from Irvine residents — Khan, Kuo, Kim and Carroll appear determined to turn the Great Park into the Great Parking Lot!

The only member of the City Council to have voted against moving forward on these projects without proper planning and community input was Councilmember Larry Agran.

Years ago, I served on Irvine’s Planning Commission and chaired the City’s Transportation Commission. Through my work on those commissions, I learned the value of meticulous master-planning. Apparently, four members of the current City Council never learned these lessons.

In November, Irvine voters will have the final say on all of these matters when they vote for Mayor and two City Councilmembers. Let’s hope voters elect representatives who understand the importance of good planning and are committed to implementing the will of the people.