Living Wage Initiative Gets Off to Fast Start

Labor Day, September 7th. Speaking to a crowded room of 70 volunteers, Luis Alemán, Chair of the Irvine Living Wage Coalition initiative campaign, exulted in the turnout. “What a great crowd — more than twice the number we expected. And what better day than Labor Day to kick-off Irvine’s Living Wage initiative campaign!”

“Together, we’re about to make history,” Alemán said. He was referring to the initiative petition, now in circulation, that would empower Irvine citizens to vote in 2016 to restore Irvine’s Living Wage Ordinance. 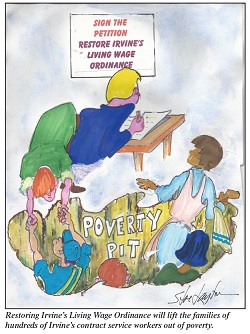 For eight years, since its enactment by a progressive City Council in 2007, Irvine’s Living Wage law guaranteed that hundreds of the City’s contract service workers — landscape workers, maintenance workers, child care workers and janitors — would be paid a Living Wage that this year stood at $11 per hour.

When the Council’s current majority — Mayor Steven Choi and Councilmembers Shea, Lalloway and Schott — voted in June to repeal the law, they effectively cut the City’s minimum wage for contract service workers from $11 per hour to $9 per hour (the State minimum wage).

After weeks of preparation by Alemán and his campaign Co-Chairs — Councilmember Beth Krom and former Councilmember and current Planning Commissioner Mary Ann Gaido — scores of petitioners are “on the streets” with their petitions. They’re seeking the signatures of more than 10,000 registered Irvine voters to qualify the Living Wage restoration initiative for the November, 2016 City election ballot.

While the Labor Day launch of the initiative included uplifting messages, the campaign is now in the nuts-and-bolts tactical phase, organizing people to circulate petitions among friends, in their neighborhoods, at parks and recreation facilities and wherever Irvine citizens gather. This must be done the old-fashioned way, one signature at a time and in-person, not online.

An important new element in this grassroots effort is the participation of the faith-based community. As reported by Rev. Paul Tellström of Irvine United Congregational Church and Rabbi Jonathan Klein, Executive Director of Clergy and Laity United for Economic Justice (CLUE), dozens of religious leaders are committed to activating their congregations to live out the commanding words of Scripture — uplifting the poor by participating in the Living Wage restoration campaign.