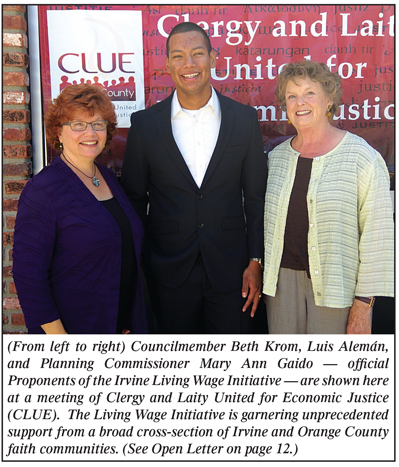 At the June 9th Irvine City Council meeting, there was one particularly rare and riveting moment of public testimony from an Irvine religious leader.  Just before the City Council cast a final vote to eliminate Irvine’s Living Wage — an action that will actually cut the minimum wages of hundreds of Irvine’s lowest-paid service workers — Pastor Paige Eaves of University United Methodist Church stood at the podium and, in a soft voice, issued a warning to the Mayor and Councilmembers.  “Throughout Scripture,” she said, “God commands us to treat workers with respect and dignity, and God brings us to account when we grind the faces of the poor.”

Now, three months later, Pastor Eaves, dozens of religious leaders and hundreds of residents who are part of a broad grassroots organization called the Irvine Living Wage Coalition, are apparently not waiting for Divine Intervention to “bring the City Council to account” for its actions.

Chair of the Coalition, UCI student and Irvine resident Luis Alemán, said, “The initiative is now in circulation. We need to gather more than 10,000 signatures of registered Irvine voters, and we have to do it in just a few months to put the measure on the ballot in 2016.”  “Obviously,” he said, “this is going to require scores of Irvine volunteers who will commit time and resources to this historic effort.”  Alemán added: “We’re going to be gathering signatures the old-fashioned way — one signature at a time on printed petitions from friends and neighbors throughout Irvine.”
The Faces of the Working Poor

When the City Council majority (Mayor Steven Choi and Councilmembers Christina Shea, Jeff Lalloway and Lynn Schott) voted to repeal Irvine’s 8-year-old Living Wage Law, they effectively cut the pay of Irvine’s lowest-paid contract service workers from nearly $11 per hour ($10.82) to just $9 per hour (which is the State minimum wage).  These City contract service workers include hundreds of janitors and housekeepers, maintenance and landscape  workers — the often faceless low-wage workforce that maintains the City’s parks and recreation facilities, scrubs the restrooms, trims the trees, and keeps Irvine clean and beautiful.

For full-time janitorial workers earning about $22,000 per year, repeal of Irvine’s Living Wage law could result in a pay cut of about $4,000 annually, causing many to fall below the poverty line.  City Councilmember Beth Krom — the only Councilmember voting against the repeal of Irvine’s Living Wage law — called the Council action “mean-spirited and contrary to Irvine community values.”

Krom recently joined with Luis Alemán and Irvine Planning Commissioner Mary Ann Gaido as one of the three official Proponents of the Living Wage Initiative.  In their official Proponents’ Statement, they said: “This initiative, placed on the 2016 ballot with the signatures of more than 10,000 Irvine voters, will enable Irvine voters to reinstate our City’s Living Wage by restoring the Irvine Living Wage Ordinance, word-for-word.”

The Proponents’ Statement continues: “When the City Council is out of step with the community, the initiative process allows the residents to speak for themselves and take constructive, corrective action.  Irvine is a nice community with nice people who understand that those who work for us are entitled to a decent day’s pay for a decent day’s work.”  The statement concludes with these words: “By using the initiative process, as citizens we can reinstate the Living Wage Ordinance and once again show the true spirit of Irvine.”