Let’s give credit where it is due. The Irvine Unified School District (IUSD) is now on a constructive path to reforming its system for electing School Board members.

Just weeks after being threatened with a major civil rights and voting rights lawsuit, the IUSD Board apparently decided to begin the process of moving from a system of “at-large” district-wide election of its 5-member Board, to a system of five smaller “single-member” districts or areas. 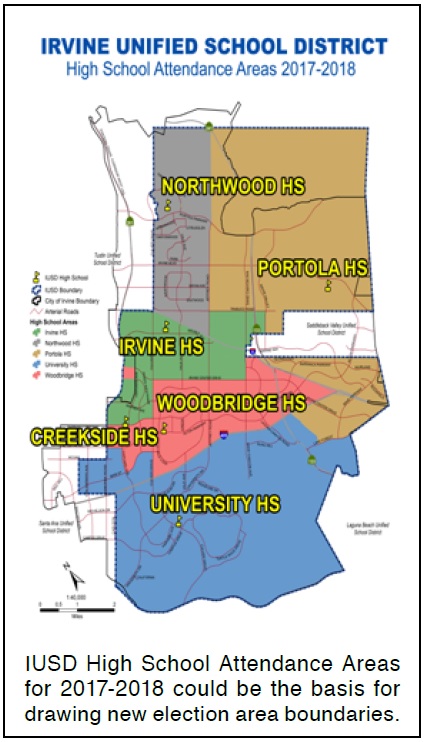 Under the California Voting Rights Act, cities and local school districts are being required to ensure fair and equal representation — especially for racial and ethnic minority communities, and entire neighborhoods, that have been historically under-represented in “at-large” voting systems.

Having made the decision to move forward with reform — presumably in time for the November, 2018 election — the IUSD Board and administrative staff have scheduled a series of informational community meetings and more formal public hearings to receive community comments prior to the creation of district area maps.

The April schedule includes a “Community Information Night” on Monday, April 9th at 6:00pm. at the Irvine High School Theater (4321 Walnut Avenue), followed by a Public Hearing at the IUSD Administration Building (5050 Barranca Parkway) on Wednesday, April 11th at 6:30pm . Of course, interested citizens are encouraged to attend and contribute their ideas and comments.

For what it is worth, I previously suggested that in dividing IUSD into five election districts or areas, a good starting point for drawing the new area maps would be to rely on the current five High School Attendance Areas that are already in place. That’s my idea. What’s yours?

Those who wish to follow this important matter online should visit the IUSD website and sign up to receive regular updates on this and other IUSD news items: iusd.org/BoardElectoralProcess or email info@iusd.org.