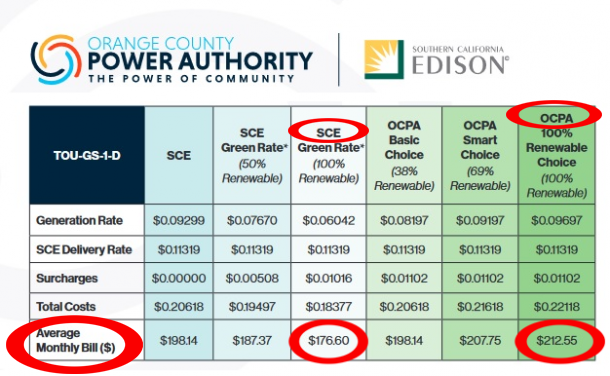 When Irvine Mayor Farrah Khan, her appointed Vice Mayor Anthony Kuo and Councilman Mike Carroll established the Orange County Power Authority (OCPA) using millions of Irvine taxpayer dollars, they promised Irvine residents that we would be receiving greener energy at a lower monthly rate than what is provided by Southern California Edison (SCE).

Mayor Khan declared that OCPA would reduce costs of electricity to Irvine’s citizens and businesses. There was also a 2020 City staff report based on OCPA data that claimed the City government itself would save money on its own $5 million per year electricity bill once the City was transferred from SCE and enrolled in OCPA.

We now know those were all flat-out lies. In fact, the City’s own electricity use was transferred over to OCPA this past April, and the City is now spending $100,000 per month more for electricity — paid for with Irvine taxpayer dollars!

One of the added benefits of clean energy is that it is cheaper. The rate comparison sheet on the SCE website reflects that — SCE customers pay on average $22 per month less for the SCE 100% renewable electricity plan. However, OCPA will be charging their customers $35.95 per month more for the same 100% renewable energy provided by SCE.

In October, every Irvine resident was transferred from SCE and automatically enrolled in the new, more expensive OCPA plan.

From the start, OCPA has been a complete disaster! Both Khan and Carroll are paid to sit on the six-member OCPA board. They voted to hire one of their political buddies to run the agency and oversee multi-million dollar energy purchasing contracts … even though he has zero experience in the electricity field. The Power Authority’s own website has forecasted a $41 million loss in its first two years of operation and OCPA has already been fined millions of dollars by State regulators for not purchasing enough electricity to prevent blackouts.

The only member of the Irvine City Council to call out the scandal-ridden OCPA is Councilman Larry Agran. Agran’s Council colleagues spent nearly a year blocking his repeated requests for a public discussion and audit of OCPA. Unwilling to be silenced, Agran began using his 3-minutes of “Announcements” during each Council meeting to update the community on the mounting evidence of corruption at the Power Authority.

Agran has also voiced his strong opposition to the City’s decision to automatically force people into the new, more costly OCPA plan, saying: “It may be legal, but to have automatically enrolled every Irvine resident into a new, more expensive electricity plan without a vote of the people was flat-out wrong!”

To opt-out of OCPA by phone, follow these steps:

To opt-out of OCPA via their website, click here.
You will need to scroll down to the bottom of the webpage where you will see an opt-out form (located along the right side of the page).