This November 6th, voters in the Irvine Unified School District (IUSD) are going to be electing two School Board members in a new manner.  Instead of voting for candidates who are running district-wide — in a so-called “at-large” election — IUSD is now divided into five smaller geographic voting areas.

This electoral reform has come to IUSD under threat of litigation to conform to requirements of State law.  Specifically, the California Voting Rights Act of 2001 has been interpreted to require larger school districts, and cities too, to move from at-large to area elections to ensure improved geographic, racial and ethnic representation.

The current IUSD Board and Administration deserve credit for responding constructively to the threatened lawsuit.  The Board publicly explored a number of ways to transition to a new system of elections by area, eventually producing and officially adopting a map with geographic areas that appear fair and logical…just in time to begin implementing in this election cycle. 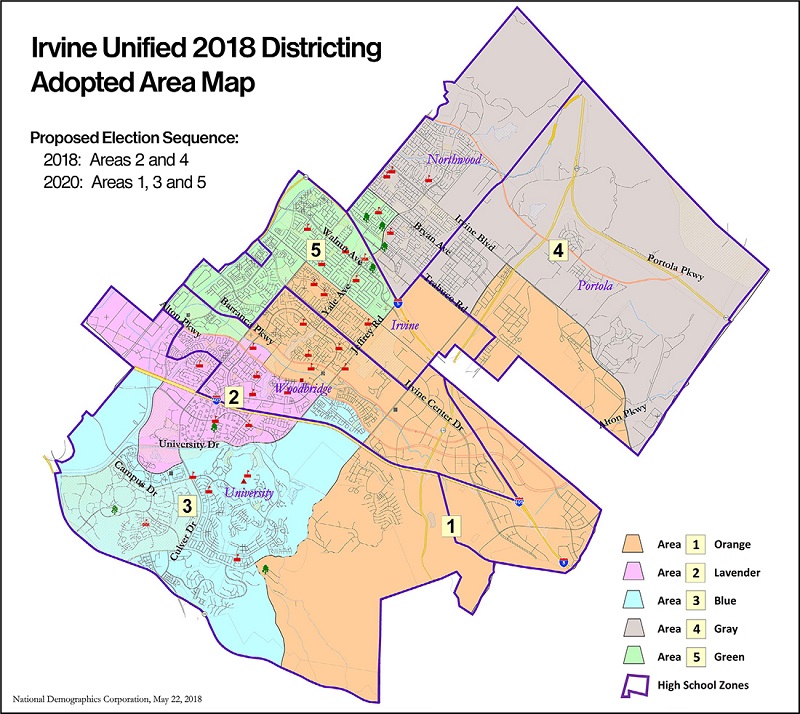 Take a look at the map.  Each of the five areas has a population of about 37,000 people. Voters in Areas 2 and 4 will each elect a School Board representative this fall. Area 2 is in the older, southern part of Irvine — with students and families living in south Woodbridge, Westpark, and University Park.  Area 4 includes many of Irvine’s newer residential villages and neighborhoods in the northern part of the City, as well as thousands of students and families living in Northwood.

Candidates for a new School Board seat must reside in the area they seek to represent.  Filing to run as a candidate in Area 2 or Area 4 opens July 16th and closes August 10th.  For more information, contact IUSD: iusd.org/BoardElectoralProcess or Phone (949) 936-5000.