SchoolWatch: First-Time Election of IUSD Trustee for Area No. 2

As I have reported previously, starting with this November’s election, voters in the Irvine Unified School District (IUSD) are going to be electing School Board members in a new manner.  Instead of voting for candidates who are running district-wide — in a so-called “at large” election — IUSD is now divided into five smaller geographic voting areas, each with about 37,000 people and between 15,000 and 20,000 registered voters.

An Irvine School Board election was slated to be held in two of these Areas — Area No. 2 and Area No. 4 — this November 6th.  (Elections will be held in the three remaining Areas — Areas 1, 3, and 5 — in 2020.)  As it turns out, because incumbent School Board member Ira Glasky was not challenged, there will be no election in Area No. 4, and Glasky will simply be awarded another four-year term on the five-member IUSD Board.

Area No. 2 — About the Candidates

It’s a different situation with Area No. 2, where incumbent School Board member Sharon Wallin is being challenged by Jean Anne Turner, who for years has been one of the most highly regarded figures in the Irvine education community.  This should be an outstanding contest in Area No. 2.

As a 16-year incumbent, Sharon Wallin is well known, respected, and certainly familiar with the issues in IUSD generally.  I join with others in honoring her many years of service to IUSD and the larger Irvine community.

But, as a resident in Area No. 2, I’m going to be volunteering and voting for Jean Anne Turner.  Let me tell you why.  Now retired from IUSD, but still a very active educator, Jean Anne has amassed a truly remarkable record of service to the Irvine community.  As a front-line classroom teacher in IUSD for more than 30 years, Jean Anne was known for her innovative and effective teaching.  In fact, she was honored as Irvine Middle School Teacher of the Year in 1988 and again in 2000 — the only Irvine teacher to be twice honored as Teacher of the Year.

Jean Anne taught at Rancho San Joaquin Middle School, in University Park where she and her family have lived continuously for 47 years.  But Jean Anne understands the problems facing teachers across Irvine.  In fact, she was a leader in the Irvine Teachers Association, working to lift teaching standards, teacher performance and, yes, teacher pay.  She understands what it takes to produce excellence — in both teaching and learning.  I’ve encouraged Jean Anne to adopt a slogan I used a few years ago, when I ran for and nearly won a School Board seat: “It’s Time to Put a Teacher on the School Board!”

What I especially like about Jean Anne is that while she is proud of IUSD and its achievements, she is honest about the serious challenges that our Irvine schools face.  IUSD Area No. 2 is located in the older, southern and southwestern area of Irvine.  Most of the Area No. 2 students and families live in south Woodbridge, the southern portion of Westpark, and University Park.  And most of the students in Area No. 2 will eventually be assigned to attend Woodbridge High School or University High.  Here are some of the issues that Jean Anne and others in Area No. 2 are raising.

Physical Neglect.  The schools in Area No. 2 are quite old — some were built more than 40 years ago.  In many cases, they have been neglected physically, reflecting an IUSD Board that has appeared to show much more interest in the City’s newer neighborhoods and newer schools elsewhere.

School Security.  Irvine’s Area No. 2 older schools were built with “open” campuses in an era when school shootings were unheard of.  Let’s face it:  Those days are long gone.  Millions of dollars must be invested in enhanced school security.

School Buses. IUSD must begin working with the City to reinstitute a comprehensive school bus system to reduce traffic and enhance public safety at school sites in Area No. 2 and throughout the City.

Overdevelopment and Overcrowding.  Every teacher and every parent knows there is a big difference between a classroom with 25 students and a classroom with 32 students.  The School Board needs to have the courage to oppose excessive growth and development resulting in overcrowded classrooms. 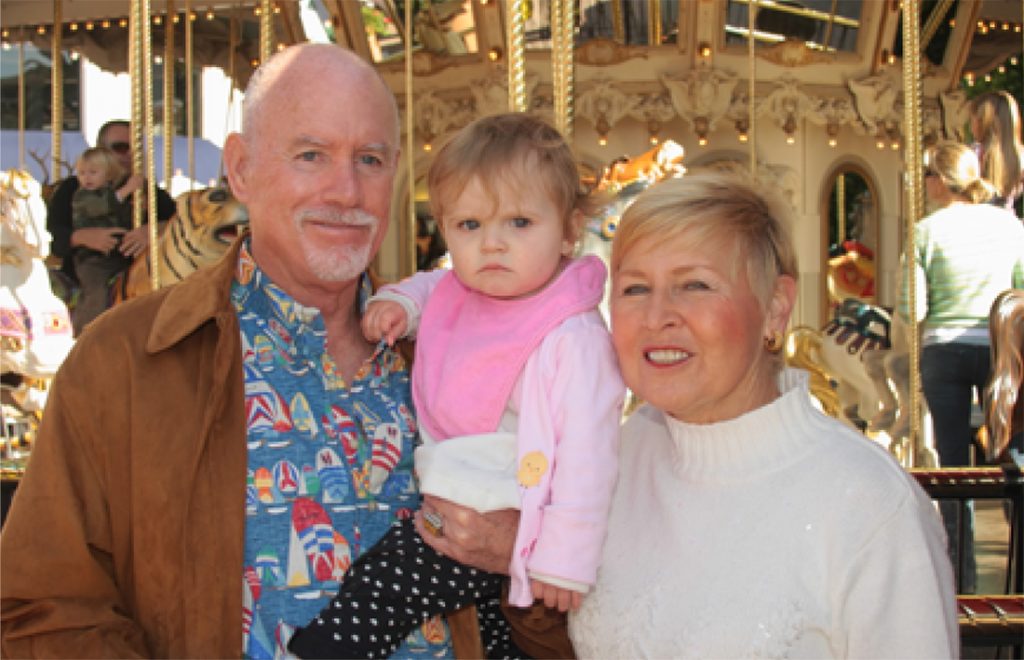 Jean Anne is pictured here with one of her grandchildren and her late-husband, Walt, who was also a longtime classroom teacher in IUSD.

Yes, I’m a friend, neighbor, and admirer of Jean Anne Turner.  In fact, I’m volunteering to help with her campaign.  If you’d like to help too, you may wish to visit her website: VoteForTurner.com.

And for those who wish to get involved in Sharon Wallin’s campaign, her website is: SharonWallin.com.