In June, Irvine Mayor Donald Wagner and Councilmembers Christina Shea and Melissa Fox voted their “intention” to abandon the Great Park site for the Veterans Cemetery.  The three voted, instead, to embrace developer FivePoint Communities’ “land-swap” scheme.  Councilmembers Jeff Lalloway and Lynn Schott have opposed the FivePoint land-swap, warning it would result in the permanent giveaway of 125 acres of the Great Park to FivePoint, while bringing massive office, commercial, and residential development — and traffic congestion — to north Irvine.

Baseball legend Yogi Berra, in the heat of a 1973 come-from-behind pennant race, sounded a hopeful note for his team when he told a reporter, “It ain’t over ‘til it’s over.”

Irvine Councilman Jeff Lalloway invoked Yogi Berra’s now-famous remark as he spoke about the continuing fight to save the Veterans Cemetery in the Great Park.  Lalloway described the contentious issue as a vitally important land-use choice for the entire Irvine community:  “Will the 125-acre Veterans Memorial Park and Cemetery be built in the Great Park, as originally planned and approved by the City and the State dating back to 2014?”  Or, alternatively, asks Lalloway:  “Will  three members of the City Council — Mayor Don Wagner and Councilmembers Christina Shea and Melissa Fox — double-down on their June 6th decision to derail the already-approved and shovel-ready Great Park Veterans Cemetery project?”

Lalloway, joined by Councilwoman Lynn Schott, has led the effort to get the Veterans Cemetery project approved — and built — since 2014.

Past and Future Decisions

The five members of the Irvine City Council will be re-visiting and deciding the matter again at Council meetings in September and October.  The Council last addressed this issue three months ago.  In a tumultuous June 6th “special meeting” of the City Council — called on just 24-hours’ notice — Wagner, Shea and Fox adopted a hurriedly prepared “resolution of intent” to derail the Veterans Cemetery in the Great Park; reject $30 million in State construction funds; and prepare to transfer ownership of the 125-acre Great Park site from the City to developer FivePoint Communities — along with a grant of zoning rights so FivePoint could quickly develop huge commercial and residential projects on the property. 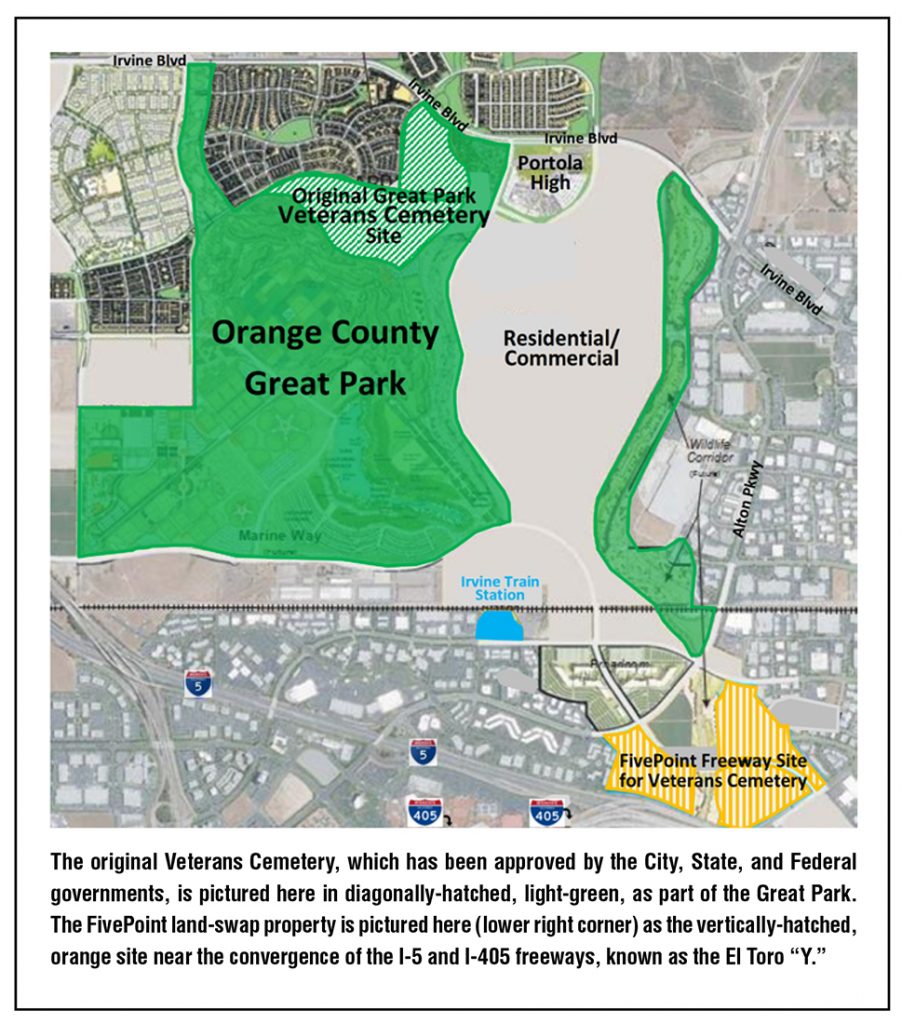 Reacting to the Council action of June 6th, hundreds of Irvine residents, including many veterans and their families, have expressed disappointment, dismay, and even anger.  The anger has been mainly directed toward the three Councilmembers who sided with developer FivePoint and voted to abandon the Veterans Cemetery in the Great Park at the very moment when the City was about to receive
$30 million in State funds to begin project construction.

Referring to the Council’s unpopular 3-to-2 vote in June, University Park resident and musician Payam Larijani said the Council should “stick with the original plan” to locate the Veterans Cemetery in the Great Park.  “The resting place for heroes is supposed to be a peaceful, quiet and beautiful place.  Haphazardly moving these veterans to the I-5/I-405 freeway site is just plain disrespectful.”  Larijani added, “Shame on Fox, Shea and Wagner for essentially being a subsidiary for the developers!”

Along the same lines, Irvine resident Rosemarie Strauss said, “It’s disgusting that we have given away so much of our treasured Great Park to FivePoint to make a profit.  It’s just wrong!  I hope the names of the three Councilmembers who have betrayed the public’s trust will be etched on a wall of shame some day!”

And 30-year resident and Vietnam-era veteran Jim Swaniger said, “The Veterans Cemetery fiasco is heartbreaking for all local veterans, and in my view the motivation is clear — greed.”

Anticipating yet another contentious Council hearing on the Veterans Cemetery issue, Lalloway noted Councilmember Lynn Schott’s memorable remark in June — that the proposed “land-swap” is a “giveaway of our Great Park.”  At the time, Schott added, “I, for one, will not participate in it.”

Lalloway says that, like Schott, he will continue to oppose the “giveaway,” making the case yet one more time that the State-approved Veterans Cemetery belongs in the Great Park.  Both Schott and Lalloway have said that once it’s built and operational, the Veterans Memorial Park and Cemetery will quickly be recognized as the Great Park’s most important and most appreciated feature. 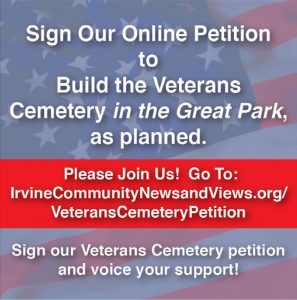 “And remember,” says Lalloway, “once the State builds the Veterans Cemetery in the Great Park, it will be operated and maintained to the highest standards by the State of California in perpetuity — in other words, forever — without any cost whatsoever to Irvine.”

Lalloway added this thought:  “To replace the Veterans Cemetery in the Great Park with massive FivePoint development, would be a terrible land-use decision — bringing added traffic congestion to Irvine Boulevard, north Irvine, and, in fact, all of Irvine.  It’s clear to me that’s not what Irvine residents want.”