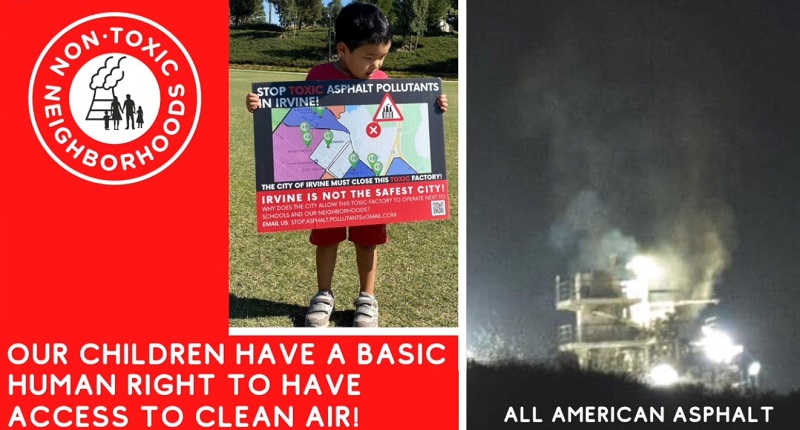 Back in the early 1990s, the County of Orange approved the All American Asphalt plant in what is now north Irvine — years before the land was incorporated into the City of Irvine … and years before homes were built in the area.

Now, however, a growing number of residents believe that failures by the South Coast Air Quality Management District (SCAQMD) to properly regulate the plant after thousands of homes were built in the area has led to a public health crisis. Parents say that the air quality is so bad that they are afraid to open their windows and are limiting their children’s time outdoors. Over the past two years, students from Northwood High School have begun complaining of burning eyes, headaches, respiratory distress, and nosebleeds while engaged in outdoor sports activities in the area.

Irvine residents have filed more than 800 complaints with the South Coast Air Quality Management District (SCAQMD) regarding the toxic emissions and noxious odors resulting from ongoing operations at the All American Asphalt (AAA) plant that is located less than a mile away from homes. (Research has shown that long-term exposure to asphalt fumes can lead to severe respiratory diseases, and even cancer.) 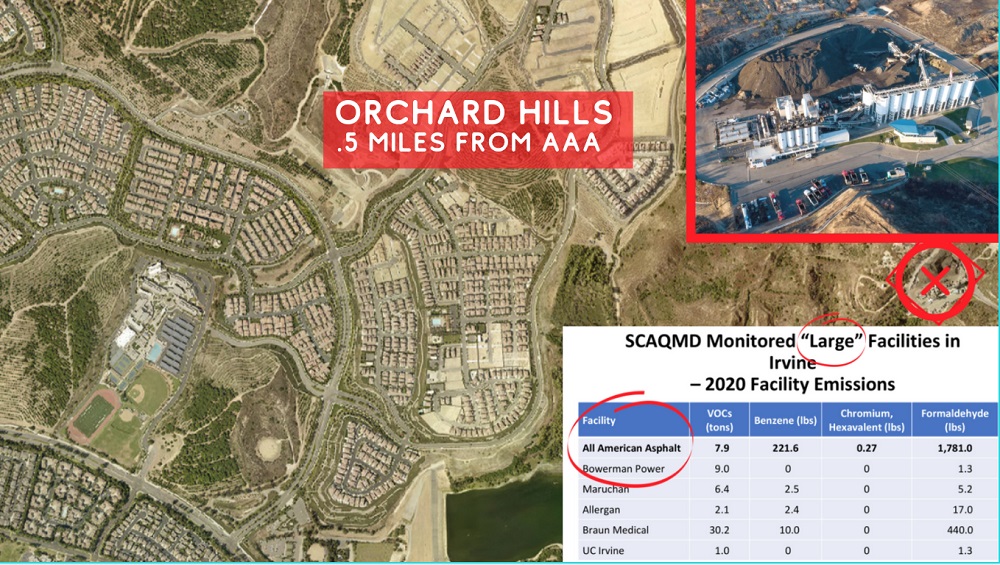 During the 2020 election, two community groups — Non-Toxic Neighborhoods and the Stop Toxic Asphalt Pollutants in Irvine — held an online candidate forum to ask Irvine Mayoral and City Council candidates questions regarding operations at the asphalt plant. During that forum, then-Mayoral candidate Farrah Khan and City Council candidates Tammy Kim and Larry Agran promised to advocate on behalf of the thousands of Irvine residents impacted by the asphalt plant’s emissions. In fact, now-Councilmember Kim said she wanted to shut the plant down. (Click here to watch Kim’s campaign statement on the asphalt plant.)

However, since taking office, Khan and Kim have changed their tune, now telling residents that there is nothing the City of Irvine can do to help and that residents must deal directly with the SCAQMD. In an August 18th Voice of OC article, Kim dismissed residents’ continuing complaints as “hysteria.”

For several months, Khan and other Councilmembers (including Kim) have blocked Agran’s repeated requests for the Council to publicly discuss All American Asphalt-related health and environmental concerns and identify near-term solutions to the problem.

Without support from his Council colleagues, Councilmember Agran — with the help of community organizers from Non-Toxic Neighborhoods (NTN) and Stop Toxic Asphalt Pollutants (STAP) — hosted his own community hearing at City Hall on July 28, 2021 to allow NTN and STAP representatives, Irvine residents, and volunteer air quality scientists from UCI to provide public testimony. 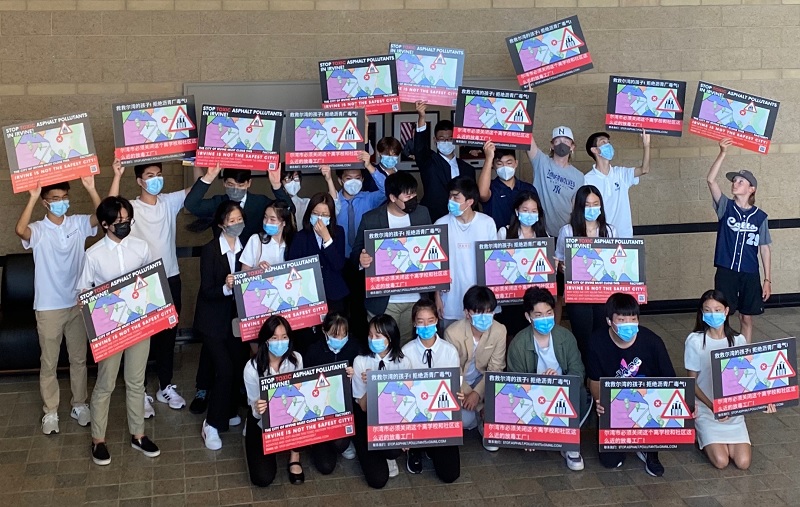 After the community hearing, Agran stated: “The testimony shared at the community hearing needs to be heard and responded to in earnest by the City. We are a City with outstanding resources — intellectual, governmental, financial — and I believe we can and should solve this problem for our affected residents. Though I am only one voice on the City Council, I am determined to press ahead, imploring my Council colleagues to hold a Special City Council Meeting in September to hear directly from the community on this important matter.”

In addition to support from Agran, the California Air Resources Board (CARB) has met with Irvine residents. At those meetings, Konte says state officials have expressed concern over the reported levels of hexavalent chromium from the AAA plant. (Hexavalent chromium is a known cancer-causing agent.)

The residents are also worried about recent increases in the plant’s production, which have resulted in dangerous increases in several other known carcinogens such as benzene, formaldehyde, polycyclic aromatic hydrocarbons (PAHs), phenol, toluene, arsenic, cadmium, lead, mercury, and nickel. In fact, Konte discovered that due to a confirmed error on the part of SCAQMD between 2016 and 2017, a 100-fold increase in benzene emissions was allowed at the plant.

Konte says that SCAQMD has also admitted their sampling has not been comprehensive and that the agency has only been sampling against chronic exposure and not short-term (acute) exposure. Even after the sensors donated by volunteer UCI advisors confirmed that the community is being exposed to acute exposure levels, nothing has been done.

While Konte fully supported Agran’s community hearing, she continues to ask that Mayor Khan schedule a special public study session with NTN’s volunteer UCI expert advisors and Irvine residents as soon as possible to work towards a solution that addresses public health concerns. With numerous confirmed errors on the part of SCAQMD, Konte says that residents no longer trust the agency to keep their families safe.

When asked for a final comment for this article, Konte said: “Our City Council majority is failing to see that there is no higher priority than meeting your constituents’ needs concerning their health and safety! We need to ask why Mayor Khan is refusing her constituents a public and transparent special meeting concerning this health crisis.”

Irvine Community News & Views will continue to report on this critical issue.