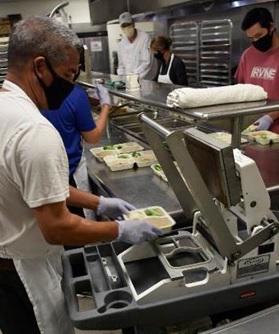 What is happening with Irvine’s renowned Senior Services during this unprecedented COVID-19 era?  We spoke with Sandra Salcedo in a Zoom meeting on June 29th to find out. Sandra is Superintendent of the Irvine Community Services Department in charge of Senior Services, and although she has been with the City of Irvine only two years, she has been solving difficult problems to be able to continue providing essential services.

Sandra and her staff are responsible for providing the Meals-on-Wheels program as well as all the other services and activities provided by the Senior Centers. Some programs had to be put on hold, some drastically modified, and others, like Meals-on-Wheels had to continue. Our ICNV readers are probably aware that hundreds of seniors were also served terrific lunches at the Lakeview Senior Center from its own kitchen, every day, prepared along with the Meals-on-Wheels dishes by the City’s professional staff, and delivered to the tables by volunteers.

When all senior facilities were shut down by the City during the week of March 16th, how did staff continue to provide essential services? According to Sandra, that was the great challenge. It was a real scramble. All the volunteers were dismissed to ensure that they would not be infected while volunteering. Sandra and her staff had to mobilize overnight to change everything, devising creative solutions for every aspect of their operations—it was certainly trial and error for the first couple of weeks, but they managed admirably. 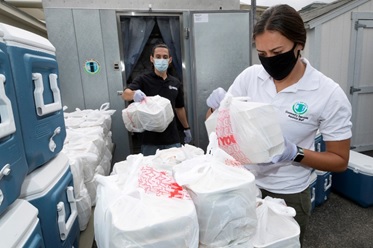 Meals-on-Wheels could have continued unchanged, but how could the staff also get meals to the seniors who depended on the congregate lunches in the Rose Garden Café? Other cities were offering “grab-and-go” meals to be picked up; but that would have defeated the entire point of protecting seniors from infection by keeping them at home, so early on it was clear that all meals had to be delivered.

The solution was for the kitchen to prepare all the meals and freeze them, but then they had to be wrapped. So, the dining room was converted into an assembly line, and City staff from other programs that had been shut down, like the aquatics program, were recruited to replace the volunteers. To protect the reliability of the meals program, the staff was split into two teams, with alternate schedules, so if a member of one team became infected, it wouldn’t affect the other team and shut down the entire operation.

To help get deliveries started before they were able to fully ramp-up meal production, the kitchen already had on hand 2,000 frozen meals kept for an emergency. But they had to purchase trays, packaging supplies and coolers to transport the meals. 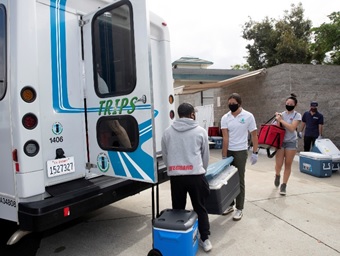 To reduce transportation needs, it was decided to deliver to each recipient for the entire week at one time, either five meals for the former congregate dining seniors or fifteen meals for the Meals-on-Wheels seniors. The City’s TRIPS shuttle-bus drivers would deliver the meals since the regular TRIPS service was temporarily discontinued. And the TRIPS buses are great for carrying the large number of meals to be delivered. Each bus has a driver, and a runner who delivers the stack of meals to each household. Delivery days are Mondays and Wednesdays.

So now, not only are three meals per day for five days a week being delivered to the Meals-on-Wheels seniors, but five meals per week are also being delivered to those who previously came to the Lakeview Senior Center for lunches, as well as to any seniors who want a lunch delivered. Since May, 475 seniors are on meal service and over 4,000 meals are delivered every week!

Obviously, seniors receiving meals could no longer choose their meal from a menu. Nonetheless, the meals are widely accepted, though a few dropped out of the program in favor of getting their meals from family members or in other ways. Another challenge has been when a senior does not hear the doorbell. It sometimes takes patience and some knocking (banging!) to finally get the senior to open the door.

To get seniors to non-emergency medical appointments during the COVID-19 crisis, the City is using an existing contract with a taxi service. To check in with the seniors, the staff makes about 300 phone calls per week. Many of the calls are made from the homes of staff members.

ICNV readers who enjoyed the lunches at Lakeview Senior Center are aware that a suggested contribution ($4) was requested, but not required. Those contributions, of course, stopped. So, Denise Bennett-Arabatzis, Supervisor in Charge of Nutrition, thought it worthwhile to send out donation envelopes to those who wished to contribute. She was not expecting much, and was very surprised to receive a substantial number of donations, some of them in the thousand-dollar range.

What is coming soon will be exercise programs that can be led remotely, like chair yoga.

The staff is also taking advantage of the now-empty senior facilities by making needed improvements, like new carpeting and painting, and “no-touch” light switches. 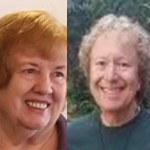 Carolyn Inmon & Harvey H. Liss
Carolyn Inmon is a retired Irvine teacher. She taught at virtually every grade level, from K-12, as well as community college. She served as President of the Community College Association from 2005-2007.

Harvey H. Liss, a former Irvine Planning Commissioner, holds a Ph.D. in Applied Mechanics and is a California Licensed Civil Engineer. Dr. Liss is a longtime resident of Woodbridge, the iconic Irvine village he helped design in the 1970s. He now reports for ICNV on environmental and senior health issues.