fivepoint-oct-issueBy the narrowest of margins, FivePoint managed to keep Choi and his pro-developer majority in control of the City Council.  The result?  Gaido says, “It was just as I warned.  The Mayor and Council had no interest in controlling growth and development.  So, the developers ran wild.”  Gaido noted, “The issuance of new residential building permits exploded — from an average of about 2,000 housing units per year to nearly 5,000 per year.  This means not just more houses and apartments, but more people, more cars, more traffic gridlock, overcrowded schools, and growing public stress and anger.”

Now, Gaido is running again for Mayor, but this time Mayor Steven Choi is running for State Assembly, so the Mayor’s seat is open.  Meanwhile, Melissa Fox is running again for Council, this time to fill the open seat of retiring Councilmember Beth Krom.  Gaido has said that, with overdevelopment and traffic getting worse by the day, her growth-control message is more popular than ever. 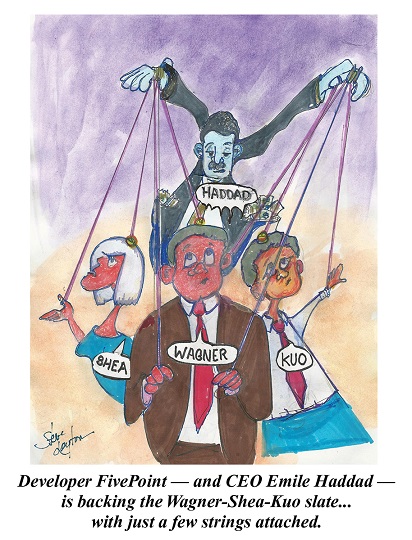 Apparently, FivePoint Communities President and CEO Emile Haddad — and his political operatives — have come to the same conclusion.  For months now, fearful of losing control of the City Council, they have been preparing to target Gaido and Fox once again.  But according to sources close to FivePoint, this time Haddad and FivePoint, along with other developers and special interests, are ready to spend $1 million to defeat Gaido and Fox, and retain control over the Mayor and Council.

Here are the steps they’ve taken in apparent readiness to conduct a massive campaign against Gaido: