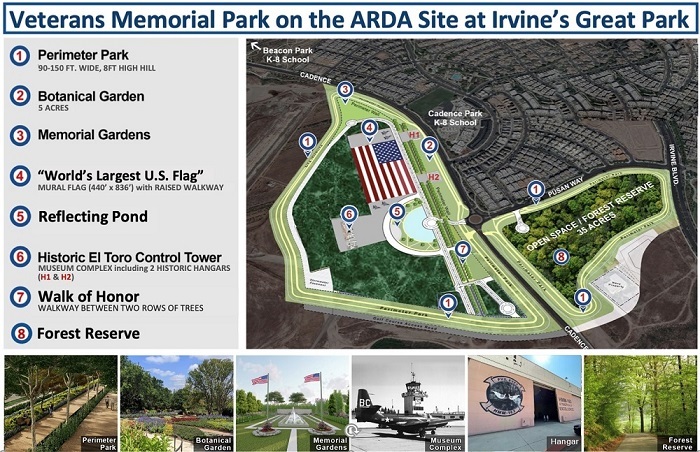 The Great Park ARDA site makes up about 10% of the land that was transferred to the City of Irvine from the U.S. Government when the El Toro Marine Corps Air Station was decommissioned after nearly 60 years of operations. The City promised to preserve the ARDA site — with its iconic aircraft control tower — to honor the hundreds of thousands of servicemembers who had passed through the Marine base on their way home from overseas deployments during World War II, the Korean War, and the Vietnam War.

But, the 125-acre ARDA site is also a very valuable piece of land that developer FivePoint has long coveted for massive office, industrial, and commercial projects that would bring thousands of additional cars into Irvine neighborhoods every day. FivePoint and their political allies have schemed for years to come up with one alternative site after another in an effort to derail the City’s promise to build a Veterans Memorial Park & Cemetery on the Great Park ARDA site.

The latest FivePoint-supported alternative site is Gypsum Canyon, which is located alongside the 91 freeway, just five miles from Riverside County. The site is scheduled to be studied by the State over the next year or two to determine if the property is feasible for a Veterans Cemetery.

While the State decides where the Veterans Cemetery will ultimately be located, Councilmember Larry Agran has a plan for how the City can preserve the ARDA site … and add a beautiful new amenity to the Great Park.

Agran is proposing that the City begin building a Veterans Memorial Park on the ARDA site — a vast park filled with trees, trails, and memorial gardens that honor the City’s rich military history and our veterans.

Since Mayor Farrah Khan and her Council majority — Councilmembers Tammy Kim, Anthony Kuo and Mike Carroll — refuse to allow Agran to even discuss his plan at a City Council meeting, Agran held a press event at City Hall last week.

At the press conference, Agran unveiled his plan for the park with a short presentation, and then answered questions from local media — including the Orange County Register, Voice of OC, Epoch Times, Irvine Community News & Views, and the Irvine WatchDog.

During the press event, Agran pointed out that Great Park Neighborhood residents near the ARDA site currently see an “eyesore” — debris-strewn land with dilapidated, abandoned buildings. Agran emphasized that not only would the Veterans Memorial Park be important for honoring our veterans and their families, it would also offer something aesthetically-pleasing that enhances property values for nearby residents and all of north Irvine.

To watch a summary of Agran’s presentation, click here.