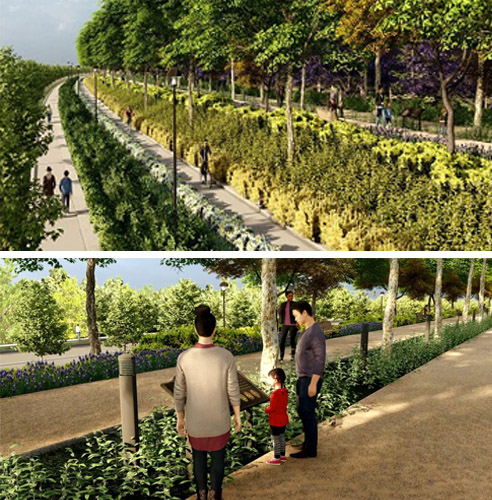 For several months, Irvine City Councilmember Larry Agran has requested that the five-member City Council publicly discuss his proposal to build a beautiful Veterans Memorial Park on the 125-acre Great Park “ARDA” site. On Tuesday (February 8th), Agran’s proposal finally made it on the Council agenda.

The Great Park ARDA site makes up about 10% of the land that was transferred to the City of Irvine from the U.S. government when the El Toro Marine Corps Air Station was decommissioned after nearly 60 years of operations. The City promised to preserve the ARDA site — with its iconic aircraft control tower — to honor the hundreds of thousands of servicemembers who had passed through the Marine base on their way home from overseas deployments during World War II, the Korean War, and the Vietnam War.

In May 2020, the former Council — including current Irvine Mayor Farrah Khan and Councilmembers Anthony Kuo and Mike Carroll — adopted a citizens’ initiative (authored by Larry Agran and signed by just under 20,000 Irvine residents) to legally zone the ARDA site for a Veterans Memorial Park & Cemetery.

Once his Council colleagues made it clear they do not support a Veterans Cemetery in Irvine, Councilmember Agran submitted a proposal for the City to clean up the Great Park ARDA site and begin the process of building a beautiful Veterans Memorial Park on the property, as directed in the City’s new zoning law.

Agran has repeatedly noted that Great Park Neighborhood residents near the ARDA site currently see an “eyesore” — debris-strewn land with dilapidated, abandoned buildings. He insists that the Veterans Memorial Park would honor our veterans and their families while offering something aesthetically-pleasing that enhances property values for nearby residents and all of north Irvine.

Agran’s proposal calls for a vast park filled with a forest of trees, walking trails, memorial gardens, reflecting ponds, and an aviation museum to honor the City’s six-decade military history and our local veterans. (A botanical garden is part of Agran’s proposal.)

However, Councilmember Tammy Kim has recently announced her own proposal for the Great Park ARDA site.

After more than 40 minutes of public comments at the Council meeting regarding Agran’s proposal — which included unanimous support from veterans in the audience — Mayor Khan, along with Councilmembers Kim, Kuo and Carroll refused to support Agran’s request to direct City staff to move forward with plans for a Veterans Memorial Park on the ARDA site.

Instead, the Council voted to support Councilmember Kim’s alternative proposal for a botanical garden on the ARDA site. (Kim’s plan calls for just 5 acres of the 125-acre site to include a “veterans component.”)

After the meeting concluded, one veteran who had spoken in support of Agran’s proposal stated: “Mayor Khan and her Council majority have once again betrayed veterans. First, they took away our Veterans Cemetery that we were promised, and now they want to erase any memory of the El Toro Marine base and those of us who served there.”