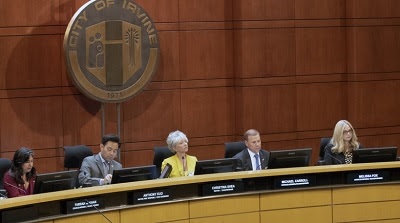 During Tuesday’s meeting, Councilmember Melissa Fox introduced a motion asking City staff to review Agran’s plan, and then report back to the Council by the end of July.  Councilmember Farrah Khan supported Fox’s motion.  Mayor Christina Shea stated that she had no interest in moving forward with construction at the ARDA site and abruptly left the Council meeting, without voting.

Councilmember Mike Carroll opposed the motion, repeating false statements made by the head of VALOR (an out-of-town organization that was created and funded solely by developer FivePoint during the 2018 election, when FivePoint was trying to get the City to hand over the ARDA site to FivePoint for massive development projects).  Councilmember Anthony Kuo also jumped on the FivePoint bandwagon, echoing the same false statements.

Scores of letters were submitted to the Council from Irvine veterans, family members of veterans, and community members in support of Agran’s plan.  In addition, the results of the latest Irvine Community News & Views poll was shared with the Council, which included hundreds of responses, with 79% of poll respondents voting in favor of the City moving forward with construction immediately.

Once again, voices from within the community fell on deaf ears, with the motion failing by a vote of 2-2 (Shea did not vote).

Ignoring the will of the people has become a pattern with this Council.  In 2018, Measure B, a FivePoint-sponsored ballot referendum that proposed moving the planned Veterans Cemetery away from the ARDA site, was soundly defeated by Irvine voters — 63% to 37%. Even after voters had spoken, the Council refused to move forward.

When asked about Tuesday’s vote, Agran said, “For years, the citizens of Irvine have supported building a beautiful Veterans Memorial Park & Cemetery on the ARDA site at the Great Park, and they support the ‘Build it NOW!’ plan. Mayor Shea and Councilmembers Carroll and Kuo have their own plan — it’s called ‘Build it NEVER!’ This is just one more obstacle that we’ll overcome in the months ahead.”