The Council regularly ignores citizens who take the time to attend Council meetings to voice their concerns over local issues.  For example, the photo below was taken at a recent meeting as Irvine veterans urged the Council to follow the will of the voters after the June 5th election.  Instead of looking up and listening as the veterans addressed the Council, Wagner, Fox and Shea ignored them, shamefully texting the entire time. 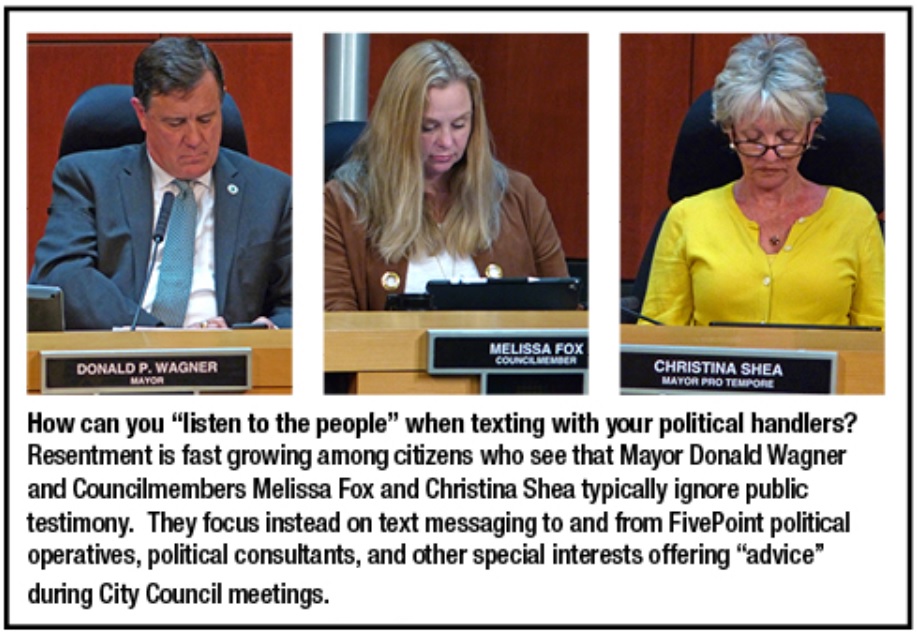 With 63 percent voting NO on B, Irvine voters sent the Council a clear message that they were against massive development (which would have dumped 10,000 more cars onto our already-overcrowded streets) and for construction of the Veterans Memorial Park & Cemetery at its originally planned and approved location, in the Great Park.

Instead of implementing the will of the voters, the Council ordered new studies for completely different Veterans Cemetery sites which will delay construction indefinitely, while keeping the already-approved Great Park site available for them to hand over to FivePoint for massive development (and massive traffic).

The Council also ignores good planning principles.  Historically, the City issued between 1,500 and 2,000 residential building permits each year.  Under this Council, that number has doubled.  They’re now issuing 4,000 permits — without the infrastructure in place to handle the increase.  Think about this:  For every permit issued, an average of 2 cars, 3 people and 4 rush-hour trips are added.  No wonder our traffic is out-of-control and our schools are dealing with overcrowding!

On November 6th, we have the chance to change the priorities at the City Hall by electing a new Council majority that is not beholden to big developers.  Irvine voters can elect new leaders who care more about helping our residents than they do about improving a developer’s bottom-line.

That’s why ICNV has endorsed Ed Pope for Mayor of Irvine, and Frank McGill and Jaci Woods for City Council.

Pope, McGill and Woods are the ONLY three candidates on the November ballot who publicly stood up and spoke out against developer FivePoint’s landswap-and-development scheme (Measure B), leading the “NO on B” grassroots effort.  Every other candidate running for Mayor or Council either supported Measure B or refused to take a public stand.

To learn more about the “NO on B” team, visit their campaign websites: