The September 14th Irvine City Council meeting included nearly three hours of public comments from frustrated residents in north Irvine who believe that emissions from the asphalt plant located about a mile from their homes has led to a public health crisis.

At Tuesday’s Council meeting, residents took on Mayor Farrah Khan and her Council majority — Vice Mayor Tammy Kim and Councilmembers Anthony Kuo and Mike Carroll —  who have downplayed health concerns raised by residents, claiming the City lacked jurisdiction and authority to deal with the toxic emissions from the All American Asphalt plant.

All year, homeowners have pleaded with the Mayor to have the City step in and help. Those requests have largely been denied.

Advocating on behalf of the residents, Councilmember Larry Agran has repeatedly requested that the Mayor schedule a special City Council meeting and public hearing on the matter. Agran’s requests have also been denied by the Mayor and her Council majority. The issue finally made it onto the Council agenda as a City staff “presentation” — not as an action item — during Tuesday’s City Council meeting.

Ironically, during the 2020 City Council election campaign, Khan and Kim joined Agran in promising to help the residents impacted by the asphalt plant’s emissions. In fact, Kim said she wanted to shut the plant down. (Click here to watch Kim’s campaign statement.) Khan and Kim changed their position after winning seats on the City Council last November. As Mayor, Khan has spent this year directing worried homeowners to the South Coast Air Quality Management District (SCAQMD) and Kim, in a recent Voice of OC interview, referred to the health concerns raised by north Irvine residents as “hysteria.”

During the Council meeting, Agran joined with the residents in expressing his frustration with the City’s failure to help families affected by the plant’s toxic emissions. Agran made clear that the Mayor and her Council majority’s response has not been in line with the City’s long history of protecting the environment and Irvine citizens. 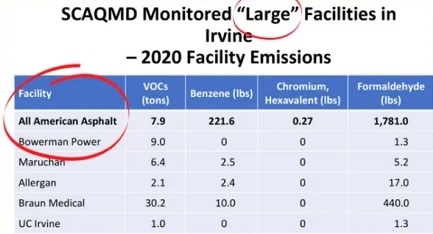 In addition to outlining the dangerous levels of benzene and formaldehyde being emitted into the air, one of the residents who spoke at Tuesday’s Council meeting, Tom Hazzard,  provided a video showing All American Asphalt’s trucks deviating from their approved routes and failing to include tarps covering the asphalt being hauled from the plant. The video showed an asphalt truck passing Canyon View Elementary School. As one parent pointed out, the school is conducting outdoor classes due to the pandemic, and that it is unacceptable that the young students are being exposed to dangerous air pollutants.

After hearing hours of public comments from dozens of residents — including many Northwood High School students who stated they are suffering from adverse health effects related to emissions from the asphalt plant — the meeting ended with the Mayor and her Council majority saying they would look into further testing at the site. Agran concurred, but added: “I think we have to face up to the fact that one way or another this plant, sooner rather than later, has to be shut down and removed to an appropriate place where production of asphalt can take place safely.”