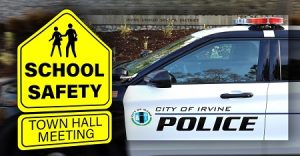 For years, Irvine has been recognized as the Safest City in America. That didn’t happen by accident. Back in the early 2000s, then-Mayor Larry Agran and Councilmembers Beth Krom and Chris Mears saw to it that the City’s police department included many more women officers and that it began to mirror our multi-ethnic, multi-cultural Irvine community. The nation’s highest standards of community policing were also implemented. Those policies have continued to ensure that the Irvine Police Department remains a model for excellence.

However, with the recent increase in mass shootings at schools across the nation, parents here in Irvine have rightfully expressed concerns regarding the safety of their children.

To address the community’s concerns, the Irvine Police Department (IPD) hosted a townhall on June 9th to share IPD’s strategies for preventing and responding to gun violence threats at Irvine schools.

During the townhall, IPD Chief Michael Kent assured community members that maintaining school safety is a critical priority of the Irvine Police Department, saying: “For over 15 years, we have worked collaboratively with our educators with an emphasis on early identification and prevention of school threats. Additionally, we have placed considerable focus and resources toward training both our personnel and school staff members on immediate active shooter response protocols.”

To watch the IPD townhall, click here.
ICNV Staff
ICNV staff writers are local Irvine journalists who are personally familiar with the events and issues they write about.
Latest posts by ICNV Staff (see all)