Has the Mayor Become a Problem for Democrats? 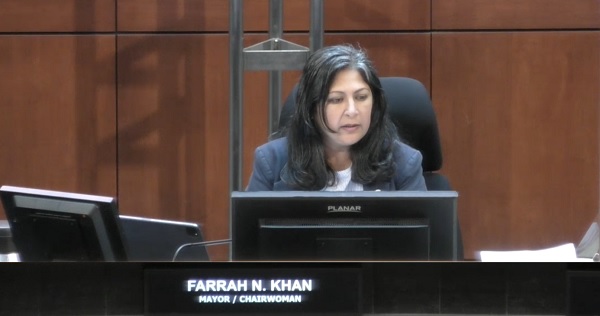 Although City Council elections here in Irvine are nonpartisan by law, Mayor Farrah Khan runs her campaigns as a partisan Democrat.

However, it appears that Khan is facing increasing opposition from local Democrats. In fact, the local Democratic club in Irvine overwhelmingly voted not to provide an early endorsement for her November Mayoral re-election campaign. (Khan received less than 25% support from Democratic club members in Irvine.)

Before the vote was taken, Irvine Democratic activists — who had campaigned, donated and voted for Khan in 2020 — rattled off a number of instances where the Mayor had defied the Democratic Party’s core values, including:

Something that should make every Democrat cringe is the fact that Khan appointed a notorious Armenian Genocide denier to her Mayor’s Advisory Council. And, she was caught on video telling members of the Turkish community that she stood with them “no matter what,” and then went on to participate in a joke about making Armenians “disappear.”

When the video became public, Khan issued a defiant statement saying the video had been “doctored” by campaign rivals. After multiple sources confirmed the authenticity of the video, Khan was forced to issue an apology.

During a recent City Council meeting, dozens from within the Armenian community provided public comments. Many spoke passionately about losing relatives in the Armenian Genocide, which took place during World War I when 1.5 million Armenians were killed by the Turkish government.

One speaker referenced his disgust with the Democratic Party’s support of Khan. After the Irvine Democratic club had voted not to endorse the Mayor, Democratic Party bosses in Anaheim rushed through an early endorsement of the embattled Mayor, months before the official candidate filing period opened. Clearly, these Democratic Party bosses sense that Mayor Khan is in serious political trouble here in Irvine — a city that prides itself on being one of the most diverse, thoroughly integrated communities in America.

I can’t help but wonder if the Democratic Party and the Democratic elected officials who have publicly endorsed Mayor Khan would continue to support her if she had been filmed joking with (and appointing to her inner circle of advisors) a Holocaust denier or an individual who regularly bashes the LGBTQ+ community.

Several political consultants, speaking on condition of anonymity, have referred to Khan as increasingly “toxic.” According to one longtime Democratic Party consultant, active in many Los Angeles and Orange County campaigns: “Khan has become radioactive. Orange County Democrats who hold state or federal office are going to be rethinking their endorsements of Khan for fear that their association with her will hurt every Democratic candidate on the ballot in November.”