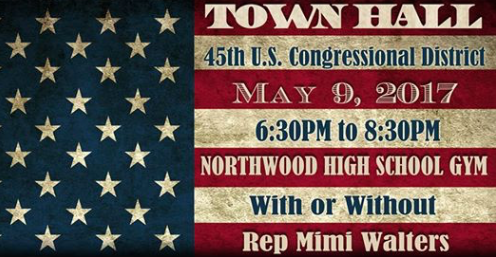 Grassroots constituents from Orange County’s 45th Congressional District (which includes all of Irvine), have been rebuffed in their efforts to meet personally with Congresswoman Mimi Walters (R – 45th CD).  So, they have organized their own Town Hall Meeting for Tuesday evening, May 9th, at Northwood High School in Irvine.

The grassroots organization, taking the name California 45th Town Hall Group, has declared itself to be non-partisan, yet focused in its unified determination to begin some kind of productive discussion with Congresswoman Walters about the direction the country is taking under the Trump Administration and Republican control of the House of Representatives and the U.S. Senate.

About 35 percent of Walters’ 800,000 Congressional District constituents live in Irvine.  For months now, hundreds of these constituents have been meeting at the Congresswoman’s Irvine District Office — but they have had no luck in actually talking with Walters.  In fact, they’ve been repeatedly locked out; Walters’ staff effectively closes down the office to visitors.

While Members of Congress across the country have been holding traditional Town Hall Meetings to engage in dialogues with their constituents, Congresswoman Mimi Walters has continued to say she does not plan on holding one.  So, her constituents have decided to make it easy by planning and organizing a Town Hall Meeting for her.  Irvine Community News & Views will be in attendance; we hope Congresswoman Walters will be there as well.

Below, we have published portions of the press release from the California 45th group that is organizing the Town Hall Meeting.

The California 45th Town Hall Group — a non-partisan, grassroots coalition of concerned citizens — has announced their own Town Hall Meeting for U.S. Representative Mimi Walters (R-Irvine) on Tuesday, May 9th, from 6:30pm to 8:30pm at the Northwood High School gym.  The Town Hall will address Representative Walters’ positions and votes on key issues of interest to the communities she represents.  Several hundred people are expected to attend.

Kathleen Treseder, spokesperson for California 45th Town Hall Group, said this: “We have invited Representative Walters to be the keynote speaker for the Town Hall.  We will be grateful if she accepts.  However, the meeting will take place whether or not Congresswoman Walters is present.”

In the event that Walters chooses not to appear, experts will discuss her actions on important public issues, including: immigration; education; the environment; healthcare and Medicare; and jobs.  Constituents in the audience will have an opportunity to disclose and share how Walters’ positions and votes on issues affect their lives in the California 45th Congressional District.  “I have concerns about the presidency of Donald Trump and how his policies may impact my family,” said Kevin Madden, a 45th District constituent.  “If Mimi won’t represent our community in Washington D.C., then who will?”

The community first asked Representative Walters to address a Town Hall Meeting in the beginning of the current Congressional term.  In February, these voters followed up by presenting her office with a 1,000-signature petition requesting a Town Hall.  So far, Walters has declined, stating that “the whole goal is to try to get me to say something that they could use against me.”  Her constituents say she is wrong; they are not the opposition; they are the people she is elected to represent!

What:    Town Hall Meeting: With or Without U.S. Representative Mimi Walters

Why:     To discuss Representative Walters’ positions and votes on key issues

California 45th Town Hall Group is a non-partisan group of constituents from the California 45th U.S. Congressional District. For more information, contact: Kathleen Treseder at: (619) 459-9493; or at: treseder@stanfordalumni.org