The developer “land-swap” proposal to kill the previously approved plan for a Veterans Cemetery in the Great Park is running into a buzz-saw of questions and criticism from City staff and from Irvine residents.

At its tumultuous April 4th meeting, which focused on the next steps in implementing the planned Veterans Cemetery in the Great Park, a divided City Council directed the City planning staff to elicit information about an “alternative” plan pushed by developer FivePoint Communities.

Councilmember Jeff Lalloway, who continues to lead the effort to establish the Veterans Cemetery in the Great Park, argues against the FivePoint  “land-swap” proposal, championed by Councilmember Christina Shea.

Championed since 2016 by Councilmember Christina Shea, the FivePoint plan has been a vague proposal to move the 125-acre Veterans Memorial Park and Cemetery out of the Great Park, locating it instead a couple of miles away on FivePoint-owned property near the Irvine Train Station and the convergence of the I-5 and I-405 Freeways, known as the El Toro “Y.”  FivePoint would take ownership of the 125-acre Veterans Cemetery site in the Great Park, with land-development rights for massive commercial and office construction, and possibly more than 1,000 houses as well.

At its May 23rd meeting, the City Council was to receive a staff report, including answers to dozens of specific questions that the City Staff had posed to FivePoint officials.  FivePoint produced no response until just hours before the Council meeting.  And what was produced seemed to raise many more questions about the land-swap.

Just hours prior to meeting, one long-time City official who spoke on condition of anonymity, said: “So far, this looks like a FivePoint land-grab.  FivePoint wants to do their so-called land-swap right away.  They want to grab 125 acres of the Great Park previously designated by the City and the State for the Veterans Cemetery, so they can quickly sell it off for commercial development, and possibly residential development on top of that.”  The official then asked, “How in the world does that advance the prospects for getting a Veterans Cemetery built and operational in the next two years?”

At the meeting itself, Irvine resident Alan Meyerson gave public testimony, noting that the net effect of the FivePoint land-swap proposal would be for the City to lose the Veterans Cemetery in the Great Park, while FivePoint would make a quick profit of $250 million on the land transaction.  Others have estimated the value of the City-owned 125-acre Great Park site to be $500 million or more.  There has been no official appraisal of the property. 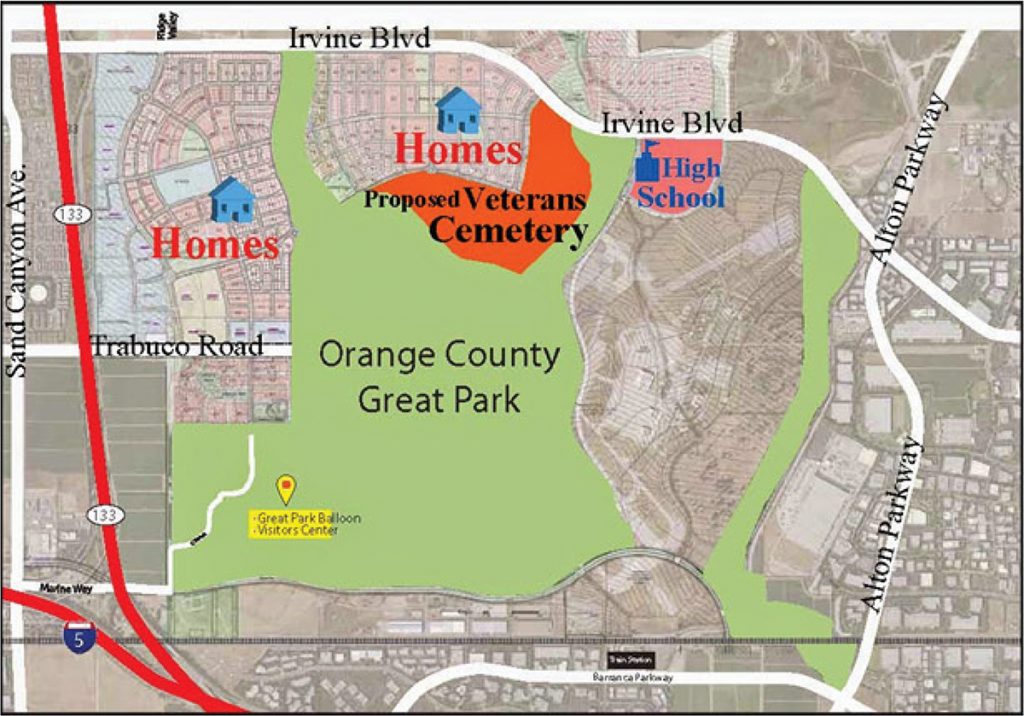 The proposed Veterans Cemetery, which has been approved by the City, State, and Federal governments, is pictured here in red, as part of the Great Park. The FivePoint land-swap property (not pictured) is located near the convergence of the I-5 and I-405 Freeways, known as the El Toro “Y.”

Councilmember Jeff Lalloway was quick to point out that while FivePoint had belatedly responded to some questions about the land-swap, there has been no analysis about what it will mean for the City to give up 125 acres of the Great Park to build more than 800,000 square feet of office and commercial development, generating nearly 10,000 additional daily automobile trips. (There would be even more trips if residential development were also permitted on the property.)

Lalloway noted this area of the City — along Irvine Boulevard — is already impacted by major traffic congestion.  Intensified development — replacing the Veterans Cemetery in the Great Park with commercial development — would produce much worse traffic congestion affecting nearby residents of Portola Springs, Stonegate, and other nearby villages.

The matter is scheduled to come back to the City Council for consideration in June, presumably with more information provided by staff, including a comparison of  “critical pathways” — the time it will take to build the Veterans Cemetery and make it operational under the current Great Park plan, and the time it will take under the FivePoint land-swap proposal.

Camera shy.  FivePoint chief political operative, Patrick Strader, is pictured here as part of the FivePoint team pushing to kill the Veterans Cemetery in the Great Park by pushing for their land-swap proposal.  Strader attends many Council meetings, and is frequently seen texting messages to Councilmember Christina Shea and others when FivePoint issues are being discussed.