Our ICNV endorsements are based on two criteria that each of these candidates met.  First, through words and actions, they have shown that, if elected, they will vote to implement Larry Agran’s “Build It NOW!” Plan for the Veterans Memorial Park & Cemetery at the original ARDA site in the Great Park.  Agran’s plan provides that within just 20 days the City would begin site clearance, cleanup, earth-moving and preservation of on-site historic features, such as the iconic military aircraft control tower and original airplane hangars.  Under Agran’s plan, the Veterans Cemetery would finally be under way.  No more delays.  No more political games.  No more developer land-grab schemes.  Build It NOW!

For example, Shea has raised about $29,000 in individual donations and Carroll has raised about $21,000. However, Shea and Carroll have taken $629,000 from “dark money” committees — which are mainly funded by big developers — in support of their campaigns and in attack pieces against their rivals. In effect, Shea and Carroll have outsourced their campaigns to developers and other special interests that spend hundreds of thousands to elect their favorite candidates who then return the favor by rubber-stamping massive development projects.

Let’s put a stop to this sort of legalized corruption right now!  Vote for Khan for Mayor, and Agran, Kim and Johnson-Norris for City Council. 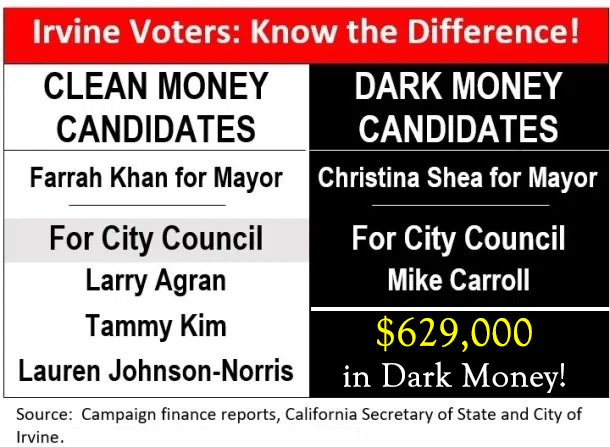