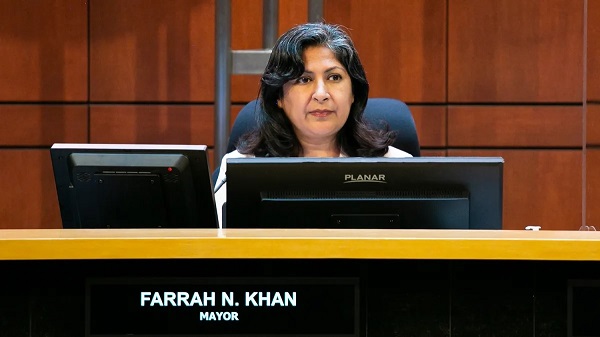 After breaking a number of campaign promises she made to voters back in 2020, embattled Irvine Mayor Farrah Khan appears to be headed for a tough re-election campaign.

When Khan first ran for Mayor in 2020, the local Irvine Democratic club enthusiastically supported her candidacy with many of the club’s members volunteering their time and donating funds to help Khan.

Less than two years later, the same Irvine Democratic activists are refusing to support Khan for re-election in the upcoming 2022 Mayoral race.

With local Democrats fleeing, Khan appears to be teaming up with her Republican Council colleague Anthony Kuo. Kuo and Khan — who are aligned on all of the major issues facing our City — have been out in the community over the past few months, posting “selfies” on their social media accounts.

According to previous supporters, Khan’s list of broken promises includes:

Orange County Power Authority (OCPA). In 2020, Khan boasted in her campaign for Mayor that she had established OCPA — promising voters that they would receive cleaner electricity at lower rates. However, the Orange County Grand Jury’s recent investigation revealed that OCPA is rife with cronyism, incompetence, and lacks transparency. This year, every Irvine ratepayer is being forced to switch from their current provider of electricity Southern California Edison (SCE) and automatically enrolled in the new OCPA plan at a higher cost for the same 100% renewable energy tier that SCE offers its customers.

All American Asphalt Plant. Mayor Khan — joined again by her appointed Vice Mayor Kuo — wasted nearly two years falsely telling residents that there was nothing the City could do to prevent Irvine’s largest industrial polluter from emitting hundreds of pounds of airborne human carcinogens every year.

Veterans Memorial Park. In 2020, Khan promised Irvine voters that if she became Mayor, she would immediately move forward in building the long-promised Great Park Veterans Memorial Park & Cemetery. However, as soon as she took office, Khan abandoned all plans for the Veterans Memorial Park and now — joined by Kuo — supports using the 125-acre site for a super-sized, super-expensive botanical garden that has nothing to do with veterans or the City’s history with the former military base in the Great Park.

Even though Khan no longer has the support of many Democratic activists here in Irvine, she was able to secure an early endorsement from the County’s Democratic Central Committee a few months ago. The endorsement came after an extremely close vote and was successful only after Khan’s longtime campaign manager and political mentor, Melahat Rafiei, intervened on her behalf. Shortly after Khan’s endorsement, Rafiei was forced to step down from her official Democratic posts after news broke that she had been arrested by the FBI in connection with attempted bribery of two Irvine City Councilmembers.