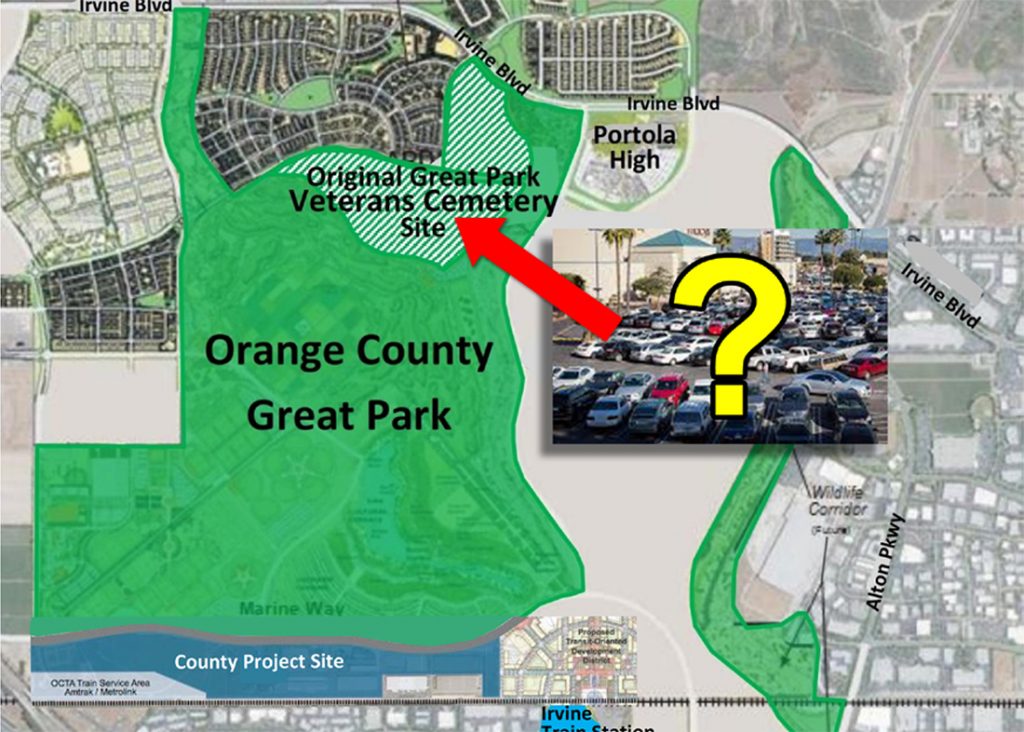 Will the long-planned and approved Veterans Cemetery in the Great Park be replaced with massive office and commercial development?

Ignoring testimony from dozens of Irvine residents who urged the City Council to “listen to the people” and repeal its previous action to replace the planned Veterans Cemetery in the Great Park with massive development, Councilmembers voted (3-to-2) to put the matter on the June 5th ballot for the people of Irvine to decide.

This final Council action comes after more than six months of turmoil, beginning last June when Councilmember Melissa Fox “flipped” her vote and joined Mayor Donald Wagner and Councilmember Christina Shea to support a “replace-and-rezone” scheme pushed by developer FivePoint Communities.  Ordinance No. 17-08, eventually adopted by the Council on a 3-to-2 vote, would replace the planned, promised and State-approved Veterans Cemetery in the Great Park; it would be replaced with zoning for developer FivePoint to build 812,000 square feet of office and commercial projects, generating nearly 10,000 additional daily auto and truck trips in north Irvine and throughout the City.

After the controversial replace-and-rezone ordinance was officially adopted by the Council on a “second-reading” last October 10th, an Irvine citizens’ committee was hastily organized.  Relying on hundreds of Irvine volunteers, the Committee to Save the Veterans Cemetery in the Great Park managed to gather nearly 20,000 Irvine resident signatures on petitions in just 28 days — far more signatures than the 12,000 needed to qualify the referendum for the ballot.

Under the terms of the referendum petition, the City Council was given one last chance to reconsider and repeal its deeply unpopular action; or, alternatively, the Council would be required to put the matter on the ballot for the people of Irvine to decide.

In the end, at a tumultuous January 9th meeting, the City Council majority — Mayor Donald Wagner and Councilmembers Christina Shea and Melissa Fox — refused to repeal their replace-and-rezone ordinance; instead they voted to put the entire ordinance on the June 5th election ballot.  But, first, they had to hear an earful of public testimony from dozens of angry Irvine constituents who came to the Council meeting.

Edward S. Pope, long-time Irvine resident and Chair of the Save the Veterans Cemetery Committee, urged the Council to respect the referendum process by reconsidering and repealing their previous actions.  Others echoed Pope’s comments, calling on the three-member Council majority to “do the right thing” — to “listen to the people” instead of developer FivePoint, and return to the original plan to build the Veterans Cemetery in the Great Park.

Councilmember Jeff Lalloway pointed out that if the Council had stuck with the original plan, which was approved and pre-funded by the State and Federal governments and was “shovel-ready,” the Veterans Cemetery in the Great Park would be under construction right now.  Lalloway underscored this point by offering a motion to repeal the replace-and-rezone ordinance and direct City staff to immediately begin construction of the Veterans Cemetery in the Great Park.

Lalloway’s motion, supported by Councilmember Lynn Schott, failed when the two were outvoted by Wagner, Shea and Fox.

In an interview after the meeting, Ed Pope, himself a U.S. Army veteran as well as Chair of the Committee to Save the Veterans Cemetery in the Great Park, said:  “The City Council’s replace-and-rezone scheme is a travesty — it’s an insult to veterans, veterans’ families, and our entire Irvine community.  Wagner, Shea and Fox again refused to listen to the people and do the right thing.”

Then, shaking his head, Pope paused and added, “Well, at least all of us will finally have our chance to say NO to the Council majority and NO to FivePoint — this time in unison, at the ballot box, on June 5th!”

For updates and Other Irvine news…IrvineCommunityNews.org