Council Votes to Abandon Veterans Cemetery at the Great Park 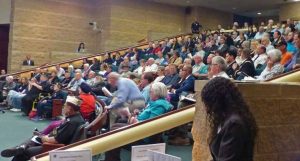 More than 200 citizens attended the June 6th Irvine City Council meeting at which the Council voted to abandon the Veterans Cemetery’s Great Park site in favor of a FivePoint Communities location near the I-5 and I-405 freeways.

On Tuesday, June 6th, after a four-hour acrimonious City Council meeting, and after hearing public testimony from dozens of citizens, the Council voted 3-2 (Mayor Wagner and Councilmembers Shea and Fox voting YES) to abandon the Great Park location for the pending State Veterans Cemetery.

Instead, in a complicated and ill-defined “land-swap,” the Council majority voted to move the Veterans Cemetery to a location owned by developer FivePoint Communities near the intersection of the I-405 and I-5 freeways, two miles from the Great Park. FivePoint, in turn, would take ownership of the 125-acre site in the Great Park, with the right to develop commercial, office and likely residential units, generating nearly 10,000 additional daily automobile trips. The land-swap is estimated to net FivePoint $500 million or more in profit.

Even though no costs or specific plans were presented for building the Veterans Cemetery at the freeway location offered by FivePoint, the City Council took action on what was described as the biggest land transaction in Irvine’s history. Mayor Wagner and Councilmembers Shea and Fox, as well as a number of FivePoint supporters, most from out-of-town, made the unsupported claim that City costs would be lower at the FivePoint location, and also asserted, falsely, that the Veterans Cemetery would become operational sooner at the freeway site.

Councilmember Jeff Lalloway, who objected to the land-swap, kept asking “what’s the rush” to make this radical change, noting “we have nothing in front of us” regarding the deal points, appraisals, traffic studies and comparative timelines between the “shovel-ready” Great Park site for the Veterans Cemetery and the FivePoint freeway site. Lalloway offered two motions to postpone the re-designation of the Veterans Cemetery site until more information becomes available. However, Wagner, Shea and Fox appeared absolutely determined to push through their resolution.

Councilmember Lynn Schott echoed Lalloway’s points, and strongly urged the Council to maintain its commitment to the Great Park location for the Veterans Cemetery, which has already received all necessary City, State and Federal approvals.

Although Wagner and Shea have been pushing the land-swap for many months, Councilmember Melissa Fox, who had previously and vigorously supported the Veterans Cemetery in the Great Park, appeared in recent weeks to suddenly change course. At the Council meeting Fox offered no substantive reasons for her change of heart.

A number of residents challenged Fox’s support for the Wagner-Shea-FivePoint land-swap plan. Irvine resident and retired teacher Carolyn Inmon asked of Fox: “Did you have your fingers crossed behind your back when you told us you supported the Veterans Cemetery in the Great Park?” Others questioned Fox, as well, even charging her with “betrayal.” U.S. Army veteran and longtime Irvine resident Ed Pope attacked Fox for having made some kind of “Faustian bargain” with FivePoint Communities, noting that FivePoint and allied developers had spent an astounding $1.5 million to elect Wagner as Mayor and re-elect Shea as City Councilmember in last November’s election.

With the proposed land-swap and approvals for the FivePoint freeway site likely to take years before construction can begin, the battle over a final resting place for veterans is sure to continue for a long time.

Those wishing to sign the Petition to build the Veterans Cemetery in the Great Park, as planned, may do so by clicking here.