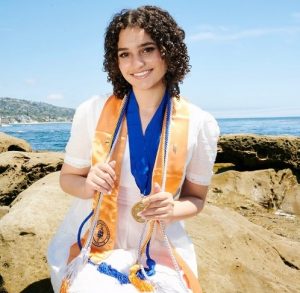 During her time at IVC, Sondos was a Phi Theta Kappa member and joined Saddleback’s Psi Beta Chapter. In addition, Sondos established her own nonprofit organization, Middle East Action.

Sondos notes, “IVC helped me to achieve my goals of not only leaving high school early but hopefully graduating from university early. In my year here, I was able to complete the requirements for transfer and receive two AA degrees. None of this would have been possible without the support and motivation from IVC’s staff.”

Sondos believes that IVC provides the same rigor that any four-year university does, saying: “Many people stigmatize community college as the easy way out, but IVC does a great job of motivating and pushing their students to excel.”

Sondos’ ultimate goal is to work in criminal justice by either becoming a District Attorney or serving as a pro-bono case specialist for the wrongfully convicted.

With everything she has already accomplished, I have no doubt that Sondos will reach every goal that she sets for herself. I wish her all the best!