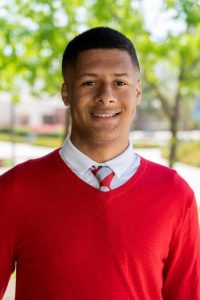 Irvine native Austin Lake attended University High School. After graduating in 2019, Austin enrolled at Irvine Valley College (IVC) where he majored in physics. This fall, Austin will be transferring to UC Berkeley where he will double-major in astrophysics and physics.

During his time at IVC, Austin helped to establish the Self-Improvement Club, which he says initially started out as a joke amongst friends, but turned out to be one of the few clubs pretty much every student can relate to. Through the club, Austin was able to help organize events and foster a community of inclusion and peer support within IVC’s student body.

When asked about IVC, Austin said: “As I like to think of it, the essence of IVC stands for inexplicable voluntary compassion. On this note, I think IVC’s greatest strengths are the amazing faculty and staff that students can rely on. Professors like Kurt Meyer and Emily Liu are just two that I’ve had the chance to engage in great conversations.”

After obtaining his bachelor’s degree, Austin wants to pursue a Ph.D. in astrophysics, ideally from the California Institute of Technology (CIT). His goal is to become a full-time researcher at NASA’s Jet Propulsion Laboratory where he can help “uncover some of the greatest mysteries our universe has to offer.”

As he prepares for UC Berkeley, Austin says: “Although I am moving on to a new chapter in life, the experiences I have had here at IVC have been some of the most important to my development as a young adult.”