The City of Irvine, originally planned for 250,000 residents at “build-out,” will be home to nearly 350,000 people in just eight years — and possibly 400,000 people soon after that.  What happened to Irvine’s commitment to careful master-planning and growth-control?

When Irvine residents voted to become a city in 1971, the new City’s population was just 10,000.  From the start, there was a lively debate about what the “right size” of this new, master-planned community should be at “build-out” — in 50 or 60 years.  Would Irvine be planned to grow into a medium-sized Southern California city of 165,000, mostly organized around UCI?  Or would it be planned to become a densely populated, far-flung city?  Would it become Orange County’s biggest city with a population of 400,000 or more, about the size of Oakland or Long Beach?

By the mid-1970s the Mayor and City Council settled on a consensus plan — a “Goldilocks” plan to build a City that would be “not too big, not too small, but just right,” topping out at about 250,000 people.  The plan projected build-out by the year 2030, with adequate roads, bridges, and transportation systems to support the population with a high level of service.

The City Council generally stuck to the plan year after year, maintaining a controlled population trajectory.  The City’s population was about 143,000 in the year 2000, growing to 212,000 in the year 2010 — with the expectation of growing at a modest pace in the final build-out years.

But in this decade, a succession of new, pro-developer Mayors, City Councilmembers and Planning Commissioners jettisoned the City’s historic commitment to good planning and a controlled pace of growth.  As a result, since 2010, the City’s population has already zoomed to nearly 270,000 residents — well beyond the original General Plan target of 250,000 residents at build-out.

According to Mary Ann Gaido, former City Councilmember and former, longtime Irvine Planning Commissioner, “We’re now on a developer-driven trajectory of explosive growth that is overwhelming our infrastructure. We planned and built our infrastructure to accommodate 250,000 residents, not 300,000 or 350,000, and certainly not 400,000.  Just look at the traffic mess — this is the opposite of good planning.”

“Worse yet,” notes Gaido, “While I was voting NO, the Planning Commission and City Council were jamming more than 20,000 additional housing units in the development pipeline.  That means an added 60,000 people (and 40,000 more cars on Irvine streets) in just 7 or 8 years.” 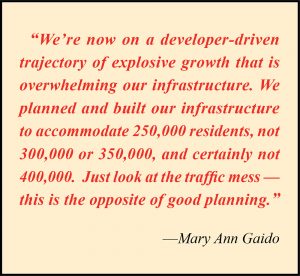 That will take Irvine’s population to nearly 330,000 people.  Moreover, FivePoint Communities and other developers are pushing for yet more residential entitlement — at the Great Park and in the Irvine Business Complex — that could cause the City’s population to soar to 400,000 by 2030.

Irvine realtors, speaking on condition of anonymity, have said that the City’s once-vaunted record of master-planning used to make it a lot easier to sell houses. Now, they say, Irvine is more like other cities.  In fact, Irvine is seen as a City beset with real problems — overdevelopment, overpopulation, and overcrowding.  One realtor said:  “Things have changed a lot in the last few years.  I’m getting listings from more and more folks who say they want to move out of Irvine — they’re sick and tired of the traffic, the crowded shopping centers, and the overcrowded schools.”

Mary Ann Gaido says she hears the same thing from one end of Irvine to the other.  “The shame of it is that the City Council has the legal tools to control the rate of growth and development — even at this late stage.  But, it’s plain to see that this Mayor and City Council won’t do it.  They clearly lack the courage to say NO to the big developers.”

Gaido ran for Mayor last November on a growth-control platform.  She finished a close second to Donald Wagner who was bankrolled by $1.5 million in campaign expenditures on his behalf, most of it coming from FivePoint Communities and other Irvine and Orange County developers.  Gaido’s grassroots campaign was outspent 15 to 1.

What Do You Think?

Under state and local law, California cities have the  legal authority to slow the rate of residential growth and development in order to uphold their General Plans and promote public health and safety.

Should Irvine’s Mayor and City Council exercise that power and authority right now? 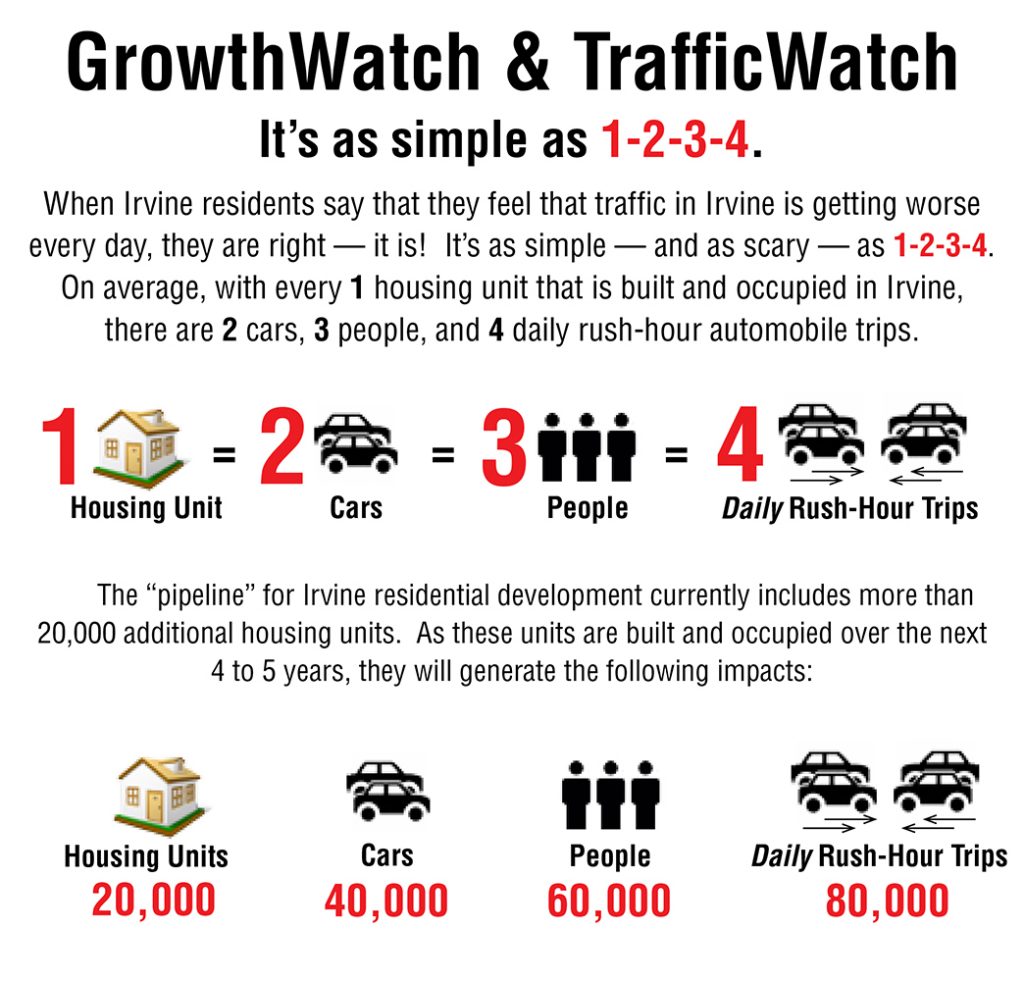